Why are new heroes locked behind Overwatch 2’s battle pass?

Directors and developers explain their reasoning behind one of the game’s most controversial decisions.

Weeks before the release of Overwatch 2, sporadic leaks from around the internet showed the games newest hero, Kiriko, locked within the free path of the battle pass system. After years of having every hero available at all times, many longtime Overwatch playersand even former professional playerswere outraged.

Though concerns arose from many different avenues, fans mostly questioned the fairness of having to endlessly grind (or pay up for the premium battle pass track) for a new hero that could be critical to winning games, especially in competitive modes.

An extensive blog post about the upcoming battle pass addressed the issues fans have been threatening riots over, as did the games directors and developers in a recent press conference.

New heroes in each nine-week season will be available at tier 55 in the free track of the battle pass, which is given to everyone who plays the game. Kiriko will be unlocked instantly for current Overwatch players through the Founder’s Pack as long as they log in before Season Two begins. New players can also purchase the premium battle pass for 1000 Overwatch Coins (approximately $10) and will receive Kiriko with no grinding needed. 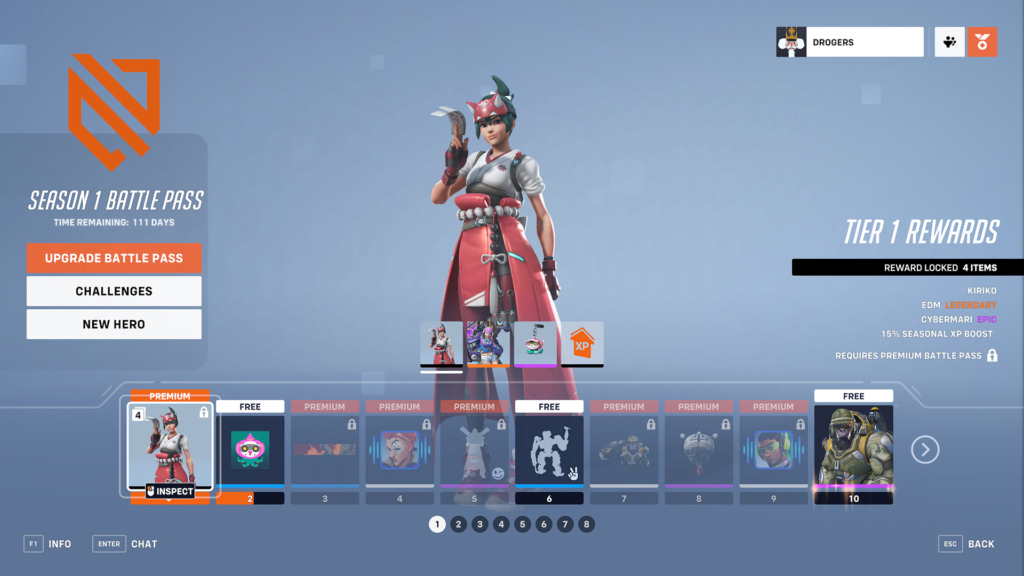 Multiple reasons were cited for placing new heroes behind the walls of a battle pass, but the changing atmosphere of the game and emerging data were a key part of the decision.

According to the blog post and Overwatch 2s front-facing personalities, the change to five vs. five competition has drastically swayed how hero counters are used. Smaller teams and extensive balance changes made it possible to win games with various heroes instead of rock, paper, scissors matchups, said game director Aaron Keller.

An example used in the blog post was swapping to Cassidy to counter an errant Tracer; few other short-term, hard counter options existed in the base game of Overwatch. With the way the game plays now, devs say, that matchup could be solved by various different heroes, removing the explicit need to have one hero unlocked to counter another.

Beyond that, the Overwatch 2 team also revealed extensive data was gathered related to the amount of heroes the average player actually uses. According to commercial lead Jon Spector, a majority of players in the base game have most of their playtime on two or fewer heroes.

You can get to 99.9 percent of playtime for a majority of our players on twelve or fewer heroes, Spector continued. Is it actually going to impact the play experience if someone has 34 of 35 heroes? When we look at the data, we feel really confident that its not going to.

The biggestor at least loudestissue raised by many dedicated players was that of competitive mode. Specific metas often rise throughout a competitive season where specific heroes are needed to compete at the highest levels. Take the recent JOATS meta in the Overwatch League: based around Junker Queen, it absolutely requires both a Genji and a Lúcio. What if a player didnt have a new, necessary hero unlocked?

It turns out the inclusion of a brand-new hero wont be of much concern for competitive players. Overwatch 2 may be new, but developers are enacting the old rule of locking a new hero (like Kiriko) out of competitive mode for a few weeks for balance reasons.

We also want to give players the ability to earn the hero before it goes into competitive [mode] as well, said Keller.

For players who pick up the game late, maybe even years down the line, there will be avenues to get all of the heroes, according to Keller. People will still have a way to remain competitive, even if theyre technically behind the times.

Brand-new players will likely take issue with Kirikos placement in the battle pass. In order to unlock her, new players will have to grind to tier 55 (out of 80). Developers couldnt answer how long (in hours) that grind would take, but said that its very achievable for those who are putting time into the game.

We want these heroes to be reasonably attainable for people who are playing regularly, Spector said. If youre going to play for free and earn the hero that way, we do want you to play the game regularly during the season to get there, he continued. The team acknowledged they theoretically could have put new heroes all the way at the end of the pass, but that they found it unfair.

Overall, the team is looking forward to getting the entire scope of the battle pass out to fans who may be upset based on the incomplete picture presented by leaks.

It wasnt totally unexpected for us to get a strong reaction from the community with this information leaking, said general manager Walter Kong. It made us feel it was more important than ever to be able to put that information into the correct perspective.

Whether fans will respond positively to the full picture of the battle pass remains to be seen. At the end of the day, players will speak with their wallets or their time, and Overwatch 2 is giving them a way to rack up rewards with both.