When does Halo Infinite season 2 start?

Prepare for the hunt.

Halo Infinites second season, titled Lone Wolves, will be released later today on May 3. It brings with it two new maps, new and returning game modes, as well as a new battle pass themed around the lone wolf Spartans the season is named after. Not only can you equip your Spartan to look the part of the Lone Wolves, but new narrative events spaced out throughout the season will also allow players to dive deeper into the story of the two new characters: Spartans Sigrid Eklund and Hieu Dinh.

For players looking to immediately dive into all that new content coming with Halo Infinite season two, Lone Wolves will be going live at 1pm CT. If youre part of the international audience, Halo developer 343 Industries has made a useful graphic to check how that launch time relates to your timezone. 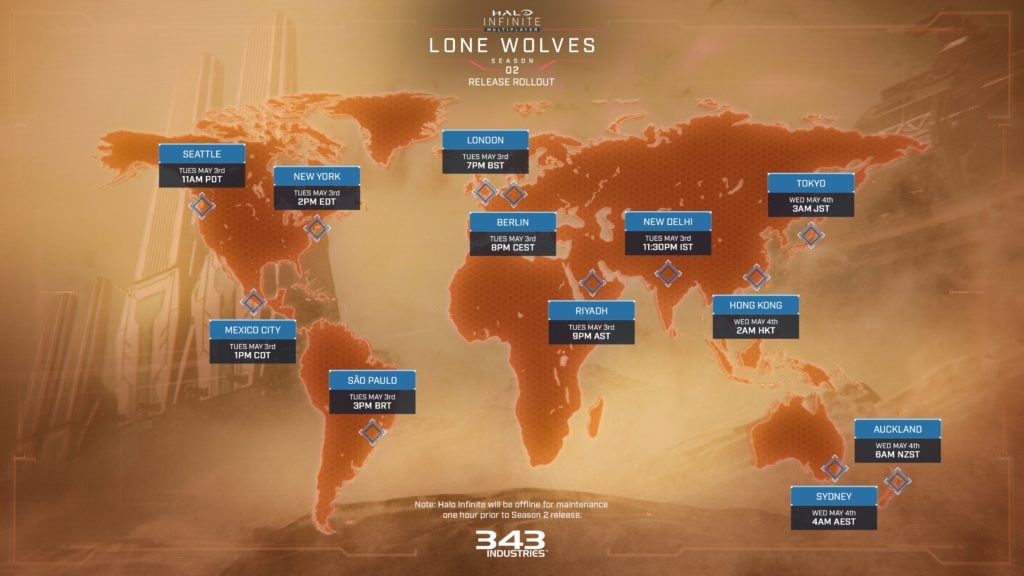 For players trying to squeeze out some last-minute playtime of season one, Halo Infinite will also be going down for a brief maintenance period prior to the season two launch window. The servers will go down at 12pm CT for an hour, so dont leave your grind for the Belltoll Visor weekly ultimate reward too late, or you risk missing out on the opportunity to acquire it.

Players who are still missing a few tiers of season ones battle pass can breathe a sigh of relief though, as 343 announced prior to Infinites launch that its multiplayer battle passes do not expire. When season two launches, you can switch between the two available battle passes to decide which one your gained XP will go towards. Making use of this feature will require players to own the premium version of the old battle pass they wish to toggle to, however, as confirmed by community director Brian Jarrard on a recent devstream.

Season two of Halo Infinite will be another six-month season akin to season one, as 343 continues to try and find the best path for development that prioritizes the teams health. While it is six months long, the latter stages of the season still promise to bring major content drops that arent tied to the seasonal release schedule. This includes an announced beta of the new Forge mode, testing for Campaign co-op, and smaller patches nicknamed drop pods that can bring quality-of-life updates to Infinite on what they hope to eventually be a monthly schedule.

Latest comments
No comments yet
Why not be the first to comment?
Featured news
Halo3 days ago