What are the best Arcane build and weapons in Elden Ring?

A variety of ways to destroy your opponents.

Elden Ring has a plethora of weapons for players to work with. Primarily, most weapons scale with these stats:

Each of these weapons has its own class and its own levels of scaling which vary from weapon to weapon. Strength weapons comprise heavy weapons with strong, slow swings. Dexterity weapons are the smaller, faster slashing or thrusting weapons. Intelligence weapons consist of staves to channel spells. Faith weapons are seals that cast incantations. Whereas, Arcane is a little different.

Arcane, as a stat in its own right, is responsible for a few things: 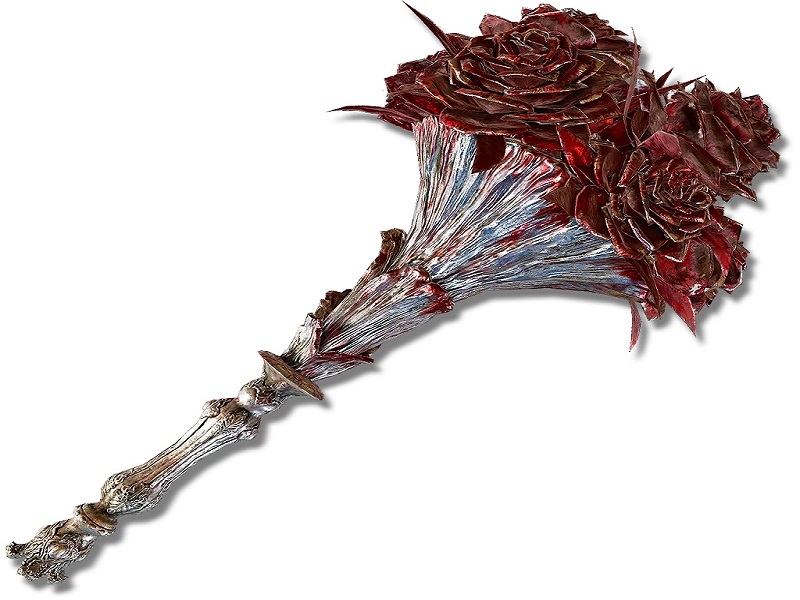 This item drops from White-Faced Varre at the end of his questline when he invades the Tarnished in Mohgwyns Palace. It is a hammer-type weapon, however, which does not give it the best attack speed compared to other, faster Arcane weapons.

What makes up for this is its Blood Tax ability. It does quite a fair bit of damage while also stealing HP from enemies at the same time, making it useful in clutch situations. Despite the slower attack speed, it has a great blood-loss buildup stat which makes it strong but not as good as the other weapons on this list. 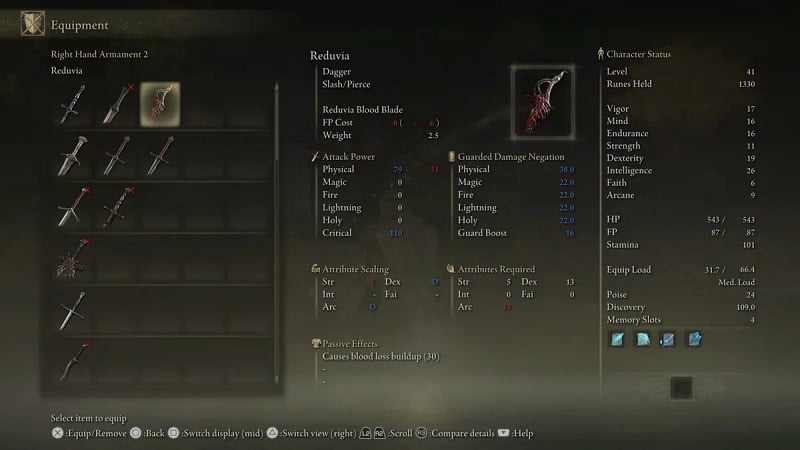 The only dagger on this list, Reduvia is an Arcane scaling weapon that, while having very limited range, has a huge blood-loss buildup stat at a whopping +87 per hit at max level. This, combined with the already high attack speed of dagger-type weapons in general, ends up causing rapid blood loss over and over, enough to take down even the toughest of bosses that are weak to Bleed effects.

The major drawback of this weapon is its range. To make up for it, its special ability, the Reduvia Blood Blade, launches projectiles causing rapid blood-loss buildup from a fair distance. The only way to acquire this weapon is by defeating Bloody Finger Nerijus near Murkwater Catacombs, which is quite early in the game, making Reduvia a weapon that can be mastered by the end-game, although better options do exist. 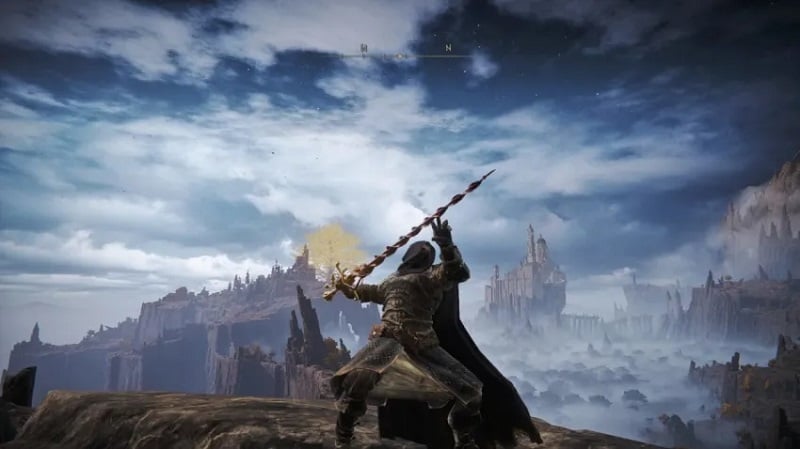 The Dynasts Finesse special ability is one of the better ones in the game, making the player invincible for one attack, while also retaliating with their own. This leads to a lot of clutch plays, letting the player avoid taking massive damage that would have otherwise killed them. Getting this weapon involves completing the Writheblood Ruins and killing the Sanguine Noble boss along with his pet dogs that also inflict blood-loss buildup, which can kill the player quickly if theyre not careful. 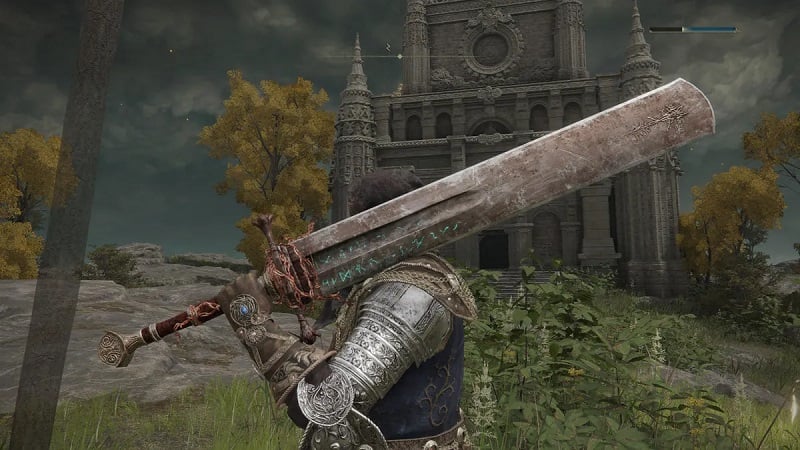 A rare sight in the Arcane category, since greatsword-type weapons hit slow and hard, they arent the best at being able to proc status effects. In addition, this weapon scales primarily off Strength while Arcane is secondary. The Marais Executioners Sword drops off Elemer of the Briar, the main boss of the Shaded Castle in the Atlus Plateau region.

With the Arcane scaling finally fixed in the recent patch, this weapon can be way more devastating than it originally was. The Eochaids Dancing Blade special ability turns this sword into a ranged drill, which does consistent damage over time, followed by a final slash at the end. The damage of this attack is based on the Strength and Arcane stats, but anything that provides a higher attack rating makes the damage of this weapon skyrocket. 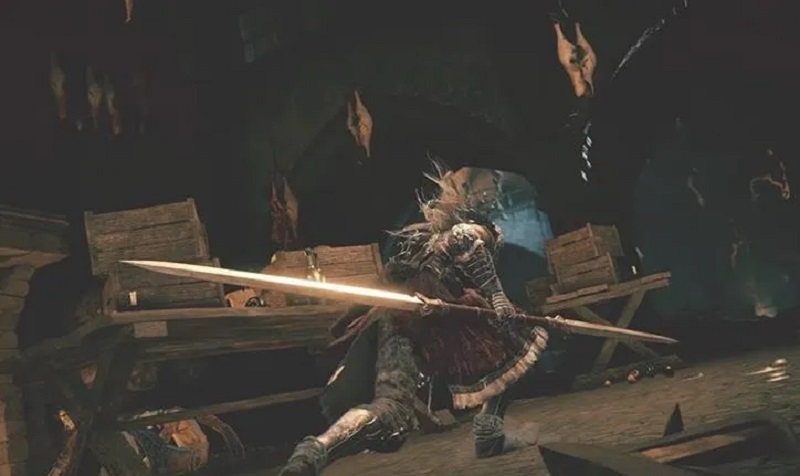 One of the better Dexterity/Arcane scaling weapons, this twinblades damage primarily scales off Dexterity while its huge blood-loss buildup procs off the Arcane scaling. Eleonoras Poleblade is also somewhat unique in this list because it also adds Fire damage to the mix, dealing it consistently while applying Bleed with every hit. This is further amplified by its weapon ability, Bloodblade Dance, which fires off a myriad of slashes in a rotating motion.

This weapon can be acquired near the end of Yuras questline. If followed correctly, players should find Bloody Finger Hunter Yura dying near the Site of Grace at the Second Church of Marika in the Atlus Plateau region. Following his death, the player will be invaded by Eleonora, Violet Bloody Finger. Defeating her will drop this Poleblade. Players do not necessarily have to complete Yuras quest to trigger the invasion. 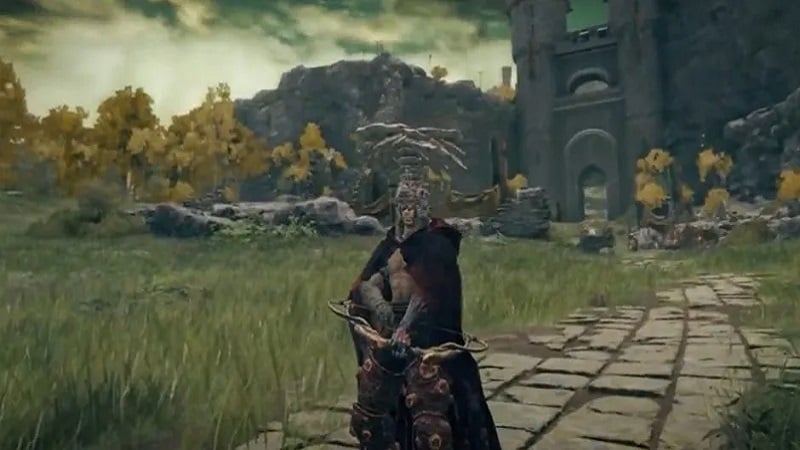 Bows in Elden Ring can be quite underwhelming, save for a few. One of those bows is the Serpent Bow. Scaling primarily with Dexterity, this bow can be found in a pool of Scarlet Rot in the Abandoned Cave dungeon. It is one of the few great Poison buildup weapons in the game with an added caveat: If Bloodbone arrows are equipped with the Serpent Bow, it will inflict both Poison and Bleed buildups with each arrow.

Its Mighty Shot special ability also does more damage than normal, while applying the same buildup effects on attack. 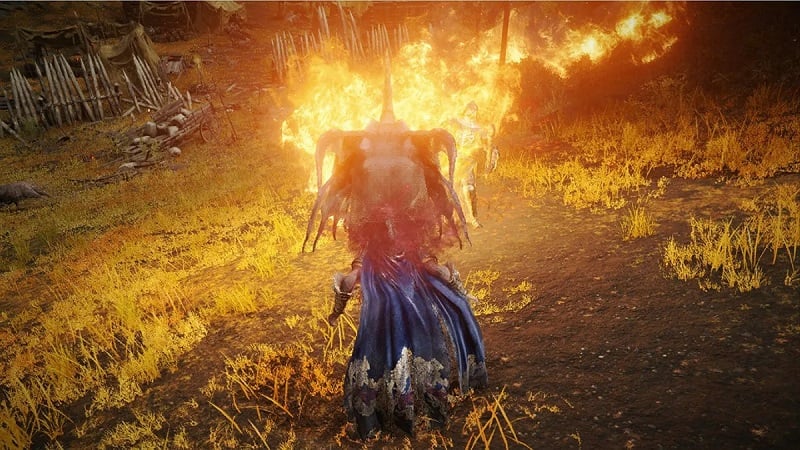 Another variation from the normal weapons we have seen thus far, the Dragon Communion Seal scales off Faith and Arcane. The primary use of this Seal is to strengthen all Dragon Communion incantations by 15 percent while also increasing the buildup rate of their added effects. 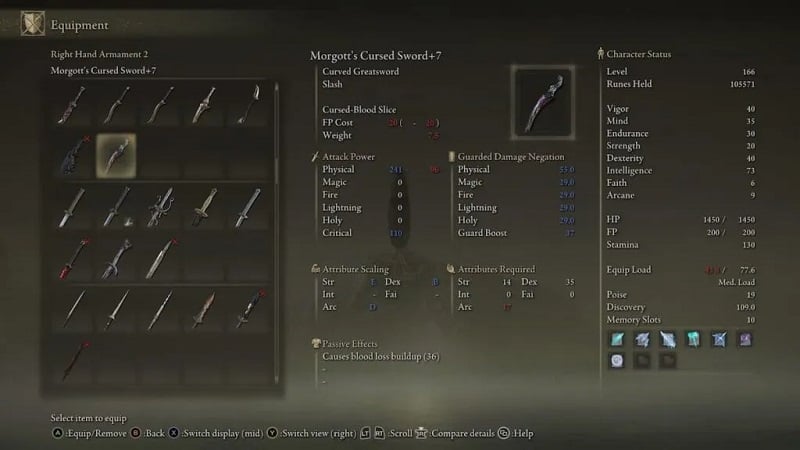 Getting to the first of the two Omen Twins of Godfrey and Marika, Morgotts Cursed Sword is an armament that can be created using the Remembrance of the Omen King that drops after defeating Morgott, the Omen King in Leyndell. It is a curved greatsword-type weapon that scales quite well with Arcane compared to other curved greatswords. It is also very light, adding to the low equipment load.

Another weapon that causes rapid blood-loss buildup, its quick slashes, and huge procs ensure that a single combo can trigger the Blood Loss effect at least once. The Cursed Blood Slice weapon art also does the same, but even better. This ability can also absolutely annihilate low Vigor builds in PvP. 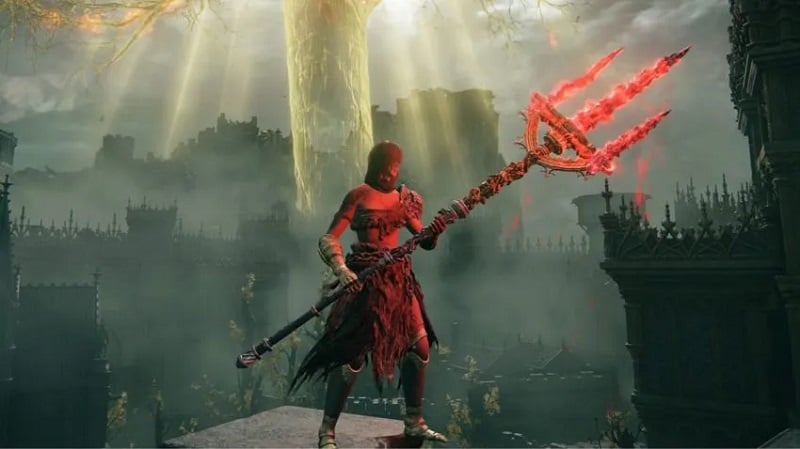 The second of the two Omen Twins of Godfrey and Marika, Mohgwyns Sacred Spear is a weapon created using the Remembrance of the Blood Lord, dropped after defeating Mohg, Lord of Blood in Mohgwyn Palace (not to be confused with Mohg, the Omen in the Subterranean Shunning Grounds). Mohgwyns Sacred Spear is a great spear-type weapon that primarily deals physical and fire damage.

It is one of the few weapons that scale off three primary stats, Strength, Dexterity, and Arcane. Despite being a great spear and having a slow attack speed, the massive blood-loss buildup of +73 with every hit can also do a lot of damage along with the high physical/fire damage. The Bloodboon Ritual is a unique weapon art that no other weapon can use, which coats the spear in Bloodflame, dealing even more damage. 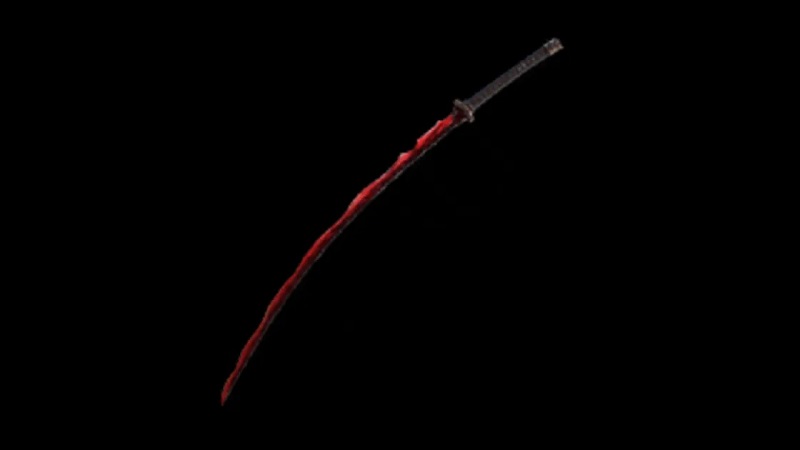 The undisputed king of all Arcane weapons, the Rivers of Blood katana is a Dexterity and Arcane scaling weapon. The high damage and attack speed scales with Dexterity while the massive blood-loss buildup per slash scales with Arcane. This weapons stats are scaled well for the end-game as is evident by when the player can get this armament. The Rivers of Blood drops from Bloody Finger Okina after he invades the player outside the Church of Repose on the Mountaintops of the Giants.

The Corpse Piler special ability of this weapon lets the player slash forward in quick succession, ultimately ending in a six-hit combo. This skill rapidly applies blood loss per hit finally leading to a hemorrhage at the end of the combo. The added range with the Corpse Piler lets players keep a safe distance from their target, with the hemorrhage at the end causing a stagger, allowing players to roll away at the end.

For players looking for a fun, interesting build with a variety of weapons, an Arcane build works wonders since most other stats are very one-dimensional with limited options. From heavy weapons to quick slashing weapons to even spellcasting, Arcane builds will keep players entertained for hours to come.