"It’s a real pleasure to be able to partner with a brand that has such a rich heritage in esports."

The new multi-year partnership will equip Vitalitys players with Kingston FURY SSD and RAM to enhance their everyday performance and training. This part of the deal will extend to all of Vitalitys facilities, such as the V.Hive, Stade de France, and the organizations Berlin performance centers, similar to Kingston FURY’s deal with G2 Esports back in January. 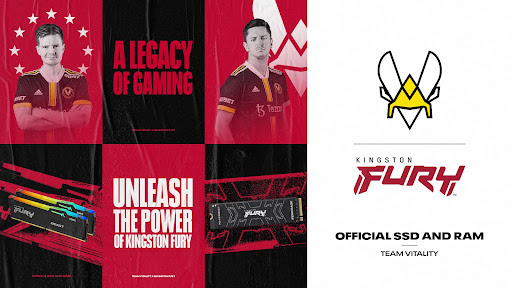 Kingston is proud to announce this sponsorship with Team Vitality, as the first French esports club, they have come a long way since 2013 to be one of the leading esports organizations in Europe, said Robert Allen, marketing director of Kingston EMEA. We look forward to being part of the team for many years to come, and with our performance DRAM and SSD upgrades in the V.Hive we look forward to enabling players to unleash their FURY in high-level competition.”

The deal also falls in line with a long line of Vitality partnerships that place focus on endemic brands to provide players with the best equipment for peak performance.

Its a real pleasure to be able to partner with a brand that has such a rich heritage in esports, said Nicolas Maurer, CEO and co-founder of Vitality. For years now, Kingston has leveraged its leading hardware to elevate the performance of teams to the next level and we couldnt be happier about having the opportunity to work alongside them.

Vitality currently competes in six different esports titles throughout Europe, as well as featuring an Indian Call of Duty Mobile lineup. The organizations CS:GO team is preparing for the IEM Road to Rio 2022: European RMR B tournament with hopes of securing a spot at the IEM Rio Major. The RMR B tournament will take place from Oct. 4 to 9.

Latest comments
No comments yet
Why not be the first to comment?
Featured news
Business2 days ago

Google finally shutting down Stadia after sinking millions into it