The way Valve handled points was not mentioned once in the Dota Pro Circuit Rulings.

It really does feel like the deeper into a competitive season of Dota 2 we get, the worse communication from Valve gets for fans, players, and organizations.

And, hot off the heels of another messy set of ticket sales for The International 2022, Valve has seemingly tossed a new rule into the Dota Pro Circuit that is impacting which teams are getting a direct invite to the event.

Late last night, several fans pointed out there was a discrepancy between the official Valve DPC website standings and unofficial sites like Liquipedias standings, showing that Fnatic was actually qualified for TI11, not the Virtus.pro roster playing under the Outsiders tag. This was confirmed today by the official Dota 2 Twitter account and a blog post, leading to mass discourse within the competitive community.

We are aware of a discrepancy regarding how the DPC standings are calculated when compared to unofficial sources. The DPC website https://t.co/lqfXMpOBmD reflects the official standings for the 2021-2022 season.

According to calculations run by multiple sources, including Liquipedia, after being eliminated from the Arlington DPC Major over the weekend, Outsiders qualified for the final TI11 direct invitebeating out Fnatic by just .05 points at 1020.05 total.

At least, that is what it appeared had happened, until today.

Now, according to Valves official standings, Fnatic is actually the team that nabbed that last spot because some of Outsiders point penalties for removing players mid-season, along with every other penalty step, have been rounded rather than being directly applied at their initial value. This leaves Fnatic at the static 1020 DPC points earned, while Outsiders is officially sitting at 1019. 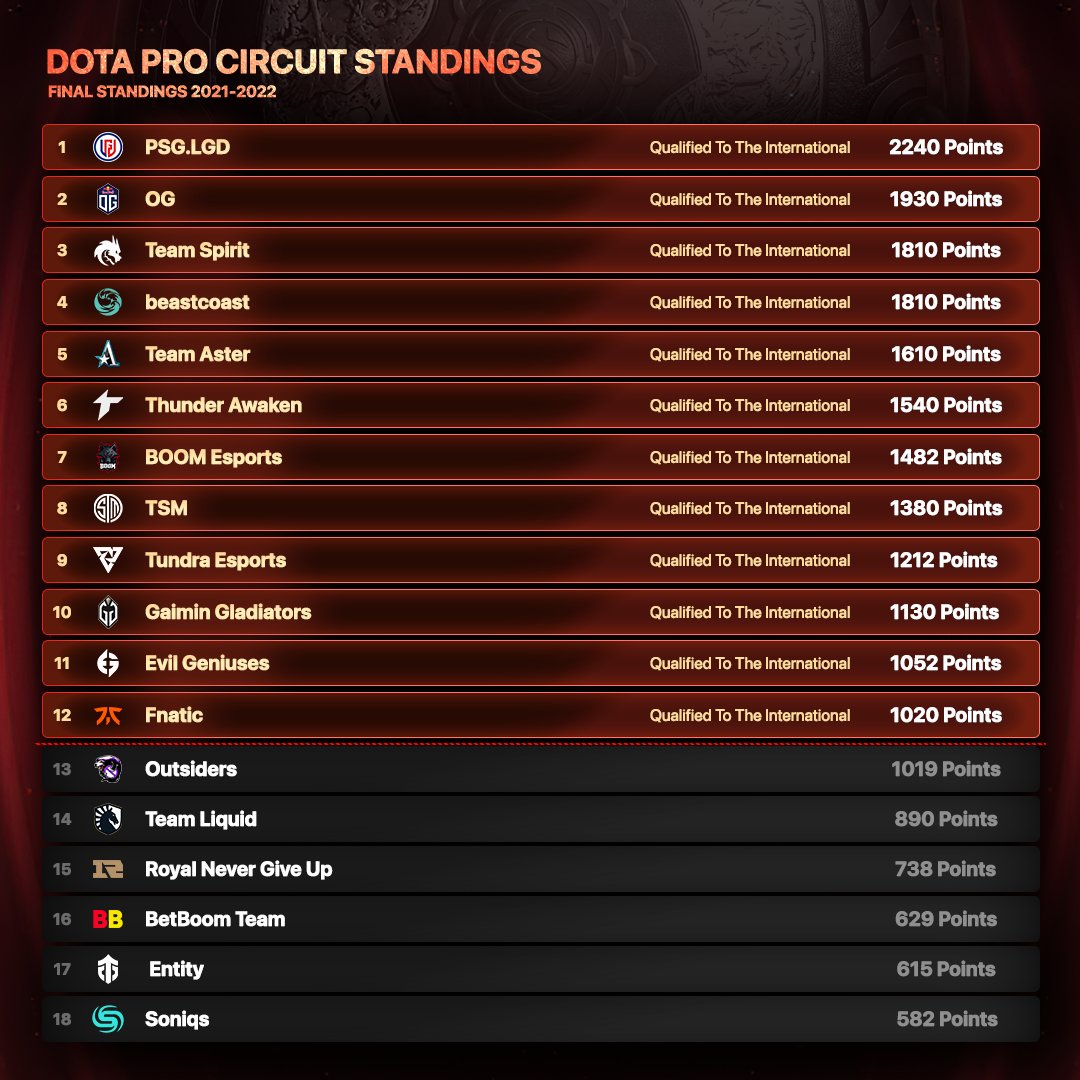 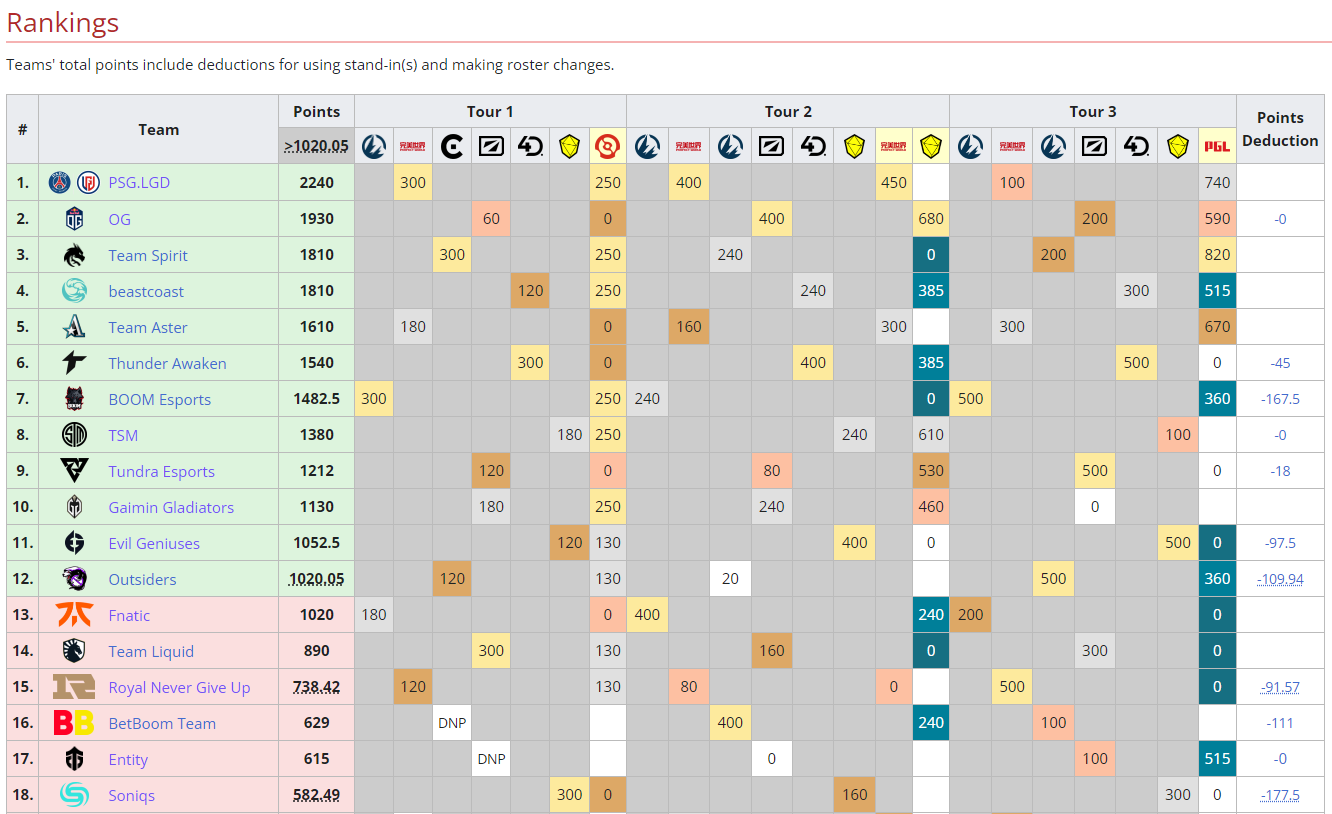 There is no mention of rounding penalties or points of any kind listed anywhere on the official DPC rule page, meaning that, up until today, everyone was using exact math based on set percentage deductions to calculate placements and Valve just decided to spring this on everyone and make it official with no real statement provided.

Applying rounding at each penalty step is not part of the published rules, not is there any indication to suggest it would work this way.

This is Valve freestyling in a nonsensical manner. https://t.co/a3OkJGwzeZ pic.twitter.com/f7rc7lKC7e

This isnt the first time discourse around the DPC website popped up either. Listings for Soniqs and other teams like Royal Never Give Up were not up to date with proper DPC pointsthough Valve did update Sonqs listing after announcing Fnatic qualified.

Valve have now updated the Soniqs point amount to what it should be.

It doesnt help Valves stance when they are not only openly discrediting one of the best upkept information resources for Dota and several other games competitive scenes as unofficial sources.

The Spanish version of the official blog listed Outsiders instead of Fnatic as claiming an invite too, leading to some believing communication is being handled poorly internally too.

As of now, it appears Fnatic will be attending TI11 through a direct invite, unless something changes, meaning Outsiders will have to play in the Eastern Europe regional qualifiers for a shot at qualifying or reaching the Last Chance Qualifier.

Regional Qualifiers will run from Sept. 3 to 18 with that LCQ being held in Singapore from Oct. 8 to 12 ahead of the main TI11 event.

Regardless of how this situation ends, this is another negative mark against Valve, both for putting down Liquipedia, a source it has used for its own benefit several times in the past, and being heavily inaccurate with its own standings upkeep to the point almost every fan turns to outside sourcing for accuracyand fans are already saying its not a great look.

Latest comments
No comments yet
Why not be the first to comment?
Featured news
Dota 24 hours ago