Urza officially gets a Planeswalker card.

The Brothers’ War doesn’t come to Magic: The Gathering until Nov. 18, but several new cards were revealed during the Weekly MTG monthly announcement stream today.

Magic‘s next set in its current story arc is a time travel story taking place during the Brothers’ War, a major conflict on Dominaria between brothers Urza and Mishra. This setting guarantees both Urza and Mishra will be represented in the set as powerful Mythic Rare cards.

While Mishra’s Standard-legal version will be revealed on Oct. 4., Weekly MTG showed off the new Urza card. This spell marks the return of meld, a mechanic last used in Eldritch Moon.

Melding Urza, Lord Protector and The Mightstone and Weakstone will give the player Urza, Planeswalker. Despite having to do what amounts to a side quest to get your deck’s big finisher is laborious, the reward might just be worth it.

This combo is only going to be playable if both pieces are worth playing on their own. First is Urza, Lord Protector: a three-mana Creature that is slated to become a popular Commander card when Brothers’ War releases. 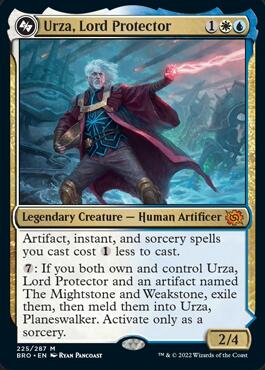 On its own, Urza is a solid three-mana card with good stats and a cost reduction ability. Urza, Lord Protector being a four-toughness Creature means it dodges most damage-based removal methods and avoids Cut Down, Black’s new one-mana removal spell introduced in Dominaria United.

Cost reduction is always strong. Being able to save mana leaves room to double spell or hold up interaction while pressing an advantage. Reducing the cost of three different card types provides Urza great versatility, allowing it to fit in various decks. 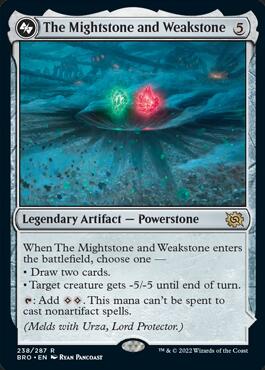 This Artifact is fine but doesn’t make much sense outside of a deck also running Urza, Lord Protector. The Mightstone and Weakstone is a five-mana card that can be either card draw or removal. There are cards that do those things for much cheaper. The two-mana ramp ability is alright, but for five mana in Standard, you want to affect the battlefield more.

When used alongside Urza, Lord Protector, this card is pretty good. It comes down a turn earlier thanks to Urza’s cost reduction. It also helps pay for Urza’s activated ability, which helps create the overwhelmingly powerful Urza, Planeswalker. 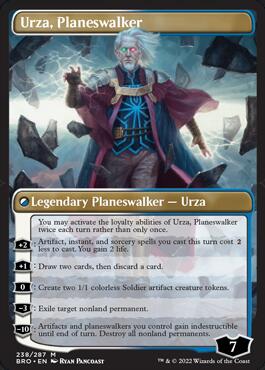 The reward for jumping through the hoops of having to meld two separate cards is Urza, Planeswalker. This powerful Planeswalker comes with five loyalty abilities and a static. Urza can activate two loyalty abilities each turn. Urza comes with enough starting loyalty that any ability, except the -10 ultimate, can be used twice the turn it comes down.

The card’s wall of text is filled with value. Urza is token generation, card draw, removal, cost reduction, and life gain all rolled up into one neat package. Players will likely use the card draw and removal abilities in most situations. Being able to take out two nonland permanents is a massive tempo swing. It’s always powerful to draw two cards.

The ultimate is fine, but at the point where you’ve resolved an Urza, the game is probably in your favor. It’s not worth it, outside of Commander, to pursue the ultimate in any meaningful capacity.