Twitch has previewed a new feature that will allow the platform’s content creators to share a list of banned users with fellow streamers, according to a report by Zach Bussey.

Blocking and suspensions have been a crucial part of Twitch streamers’ safety tool kits since the website’s inception. In the streaming service’s nearly 12-year tenure, Twitch has significantly grown its safety functionality, adding services such as AutoMod, keyword bans, chat restrictions, and more.

Twitch will be giving creators another form of safety precautions with the implementation of shared bans. This new service will permit creators to send each other a list of banned users. The screengrab preview of this function shows that creators will also be able to add details on specific blocked users. 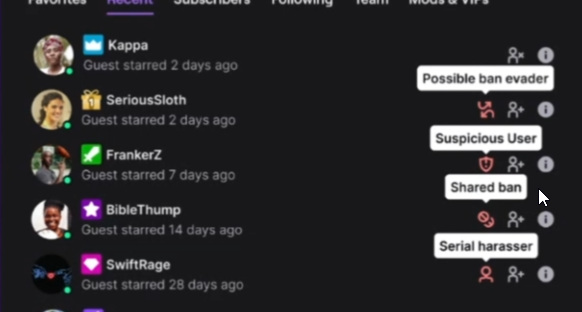 Within the shared ban list, users can label banned users with tags such as “suspicious user” or “serial harasser.” By naming accounts as “possible ban evader,” streamers can help each other avoid users attempting to circumvent channel-specific bans.

Over the past few months, Twitch has actively sought to rework the platform’s available services. The website initially saw significant cuts to tighten its services, such as disabling the Twitch desktop app, removing friends function, and removing autoplay. In a flurry of new updates, however, Twitch has reworked its ban appeals system, launched custom tags, and even plans on adding a new feature specifically for Just Chatting streamers.

The shared ban feature is still in its developmental phase, with only a select few content creators able to use the function at this time. Should the new system integrate well into the website, users can likely expect to see it implemented in the near future.