Udyr mains are a passionate bunch, and Riot listened to them.

Udyr’s update, arguably one of the most long-awaited and comprehensive reworks to a League of Legends champion in recent years, landed with a bit of a flop. This has led Riot Games to deploy some hotfix buffs to the Spirit Walker in the short term.

The buffs come shortly after Udyr’s rework hit the live servers, which by extension was also after he spent a patch on the PBE. A versatile champion thanks to his unique kit, Udyr mains hasn’t seen that fantasy lived out in his more damage-oriented builds as opposed to the tank ones, prompting swift, immediate action by Riot’s developers.

Riot Ray Yonggi, a gameplay analyst who masterminded the Sivir rework just a few patches ago, was knee-deep in the Udyr mains Discord channel, working closely with the people who know one of League’s most one-trick-able champions better than anyone. This was where he gave an update on subsequent incoming tweaks to the champion, screengrabs of which were posted to Reddit earlier today. 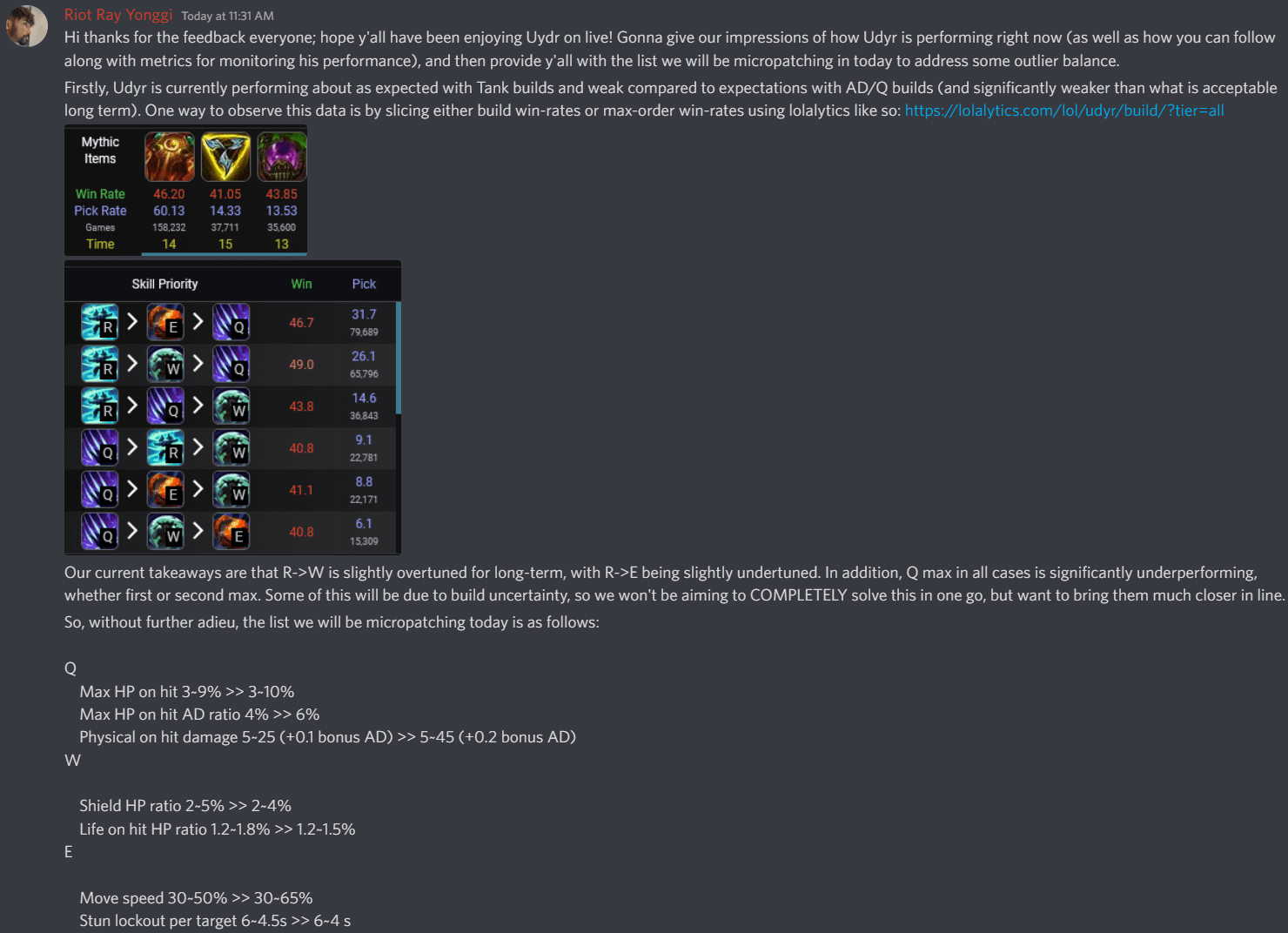 His Wilding Claw (Q) now scales much better with AD, and Blazing Stampede (E) gives Udyr 65 percent additional movement speed, up from 50 percent. His defensive capabilities conversely took a bit of a hit in the form of nerfs to Iron Mantle (W). These changes reflect a desire to bring down the top and bring up the bottom in terms of the viability of Udyr’s many playstyles, which are a quintessential, unique part of what the champion has brought to the game for over a decade now.

Tank builds, for now, are seen to be in a good enough spot as there’s always a learning curve with new champions and reworks that manifests itself in a temporarily artificially low win rate on release.

As Ray Yonggi alluded to in the Discord post, this won’t be the last we see of changes to Udyr in the near future. Aside from the “build uncertainty” he referred to having the potential to fix the upfront burst damage that Udyr mains want for the champion, there’s also a bug with Tear of the Goddess that results in his passive-empowered auto attacks not properly granting stacks on the item. But this is only the case after Wingborne Storm (R) specifically is cast. In other forms, the item interaction seems to be behaving as intended. Given the complex nature of these types of interactions, these changes will more likely be rolled out in later patches as opposed to a hotfix.