Numbers are still up compared to the same time in 2020 despite the drop.

Overall viewership is continuing to dip across streaming platforms, with both Twitch and Facebook Gaming seeing a third straight month of decline through April. But this continued drop has yet to bring either platform back down to their previous numbers that shot up in April 2020.

The continued loosening of restrictions regarding travel, events, and other activities has seen more people leave their homes, and thus their screens, more frequently than any time since the COVID pandemic began in March 2020, according to a new report from Rainmaker, StreamElements analytics partner. 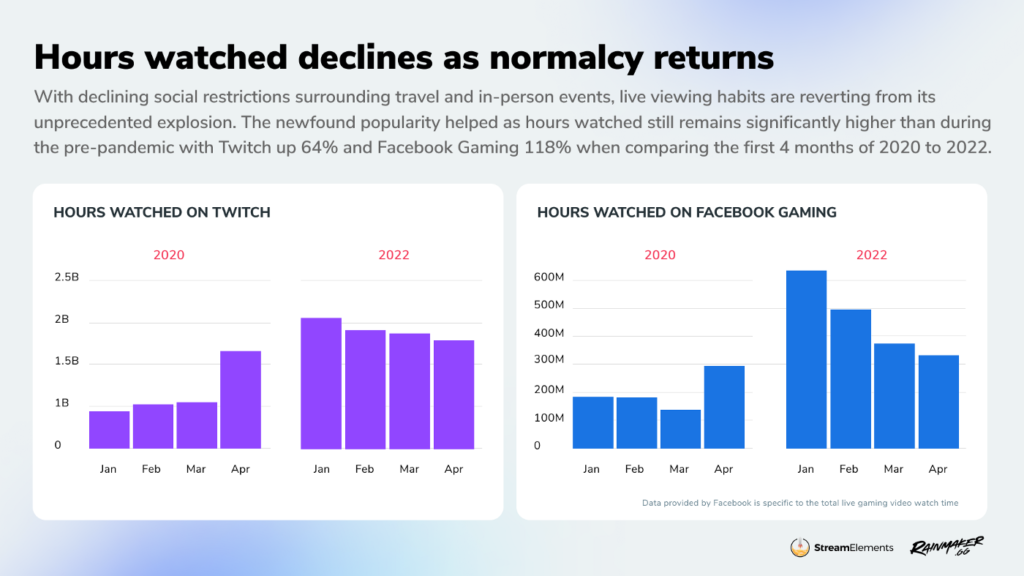 “Based on what we are seeing across livestreaming platforms, viewing habits are starting to revert to what they were pre-pandemic as the world opens up again for travel, events, and gatherings,” StreamElements CFO Jason Krebs said. “Even with the decline, so many creators, viewers, and brands were exposed to the appeal of the medium that even the lowest month in the future will likely be above the highest month in the past before the pandemic started.”

During April, Elden Ring also maintained a top-10 spot on Twitch despite dropping 70 percent of its total viewership from March as streamers move on to other games. Meanwhile, Just Chatting, Grand Theft Auto V, and League of Legends continue to hold those top-three spots on the platform. 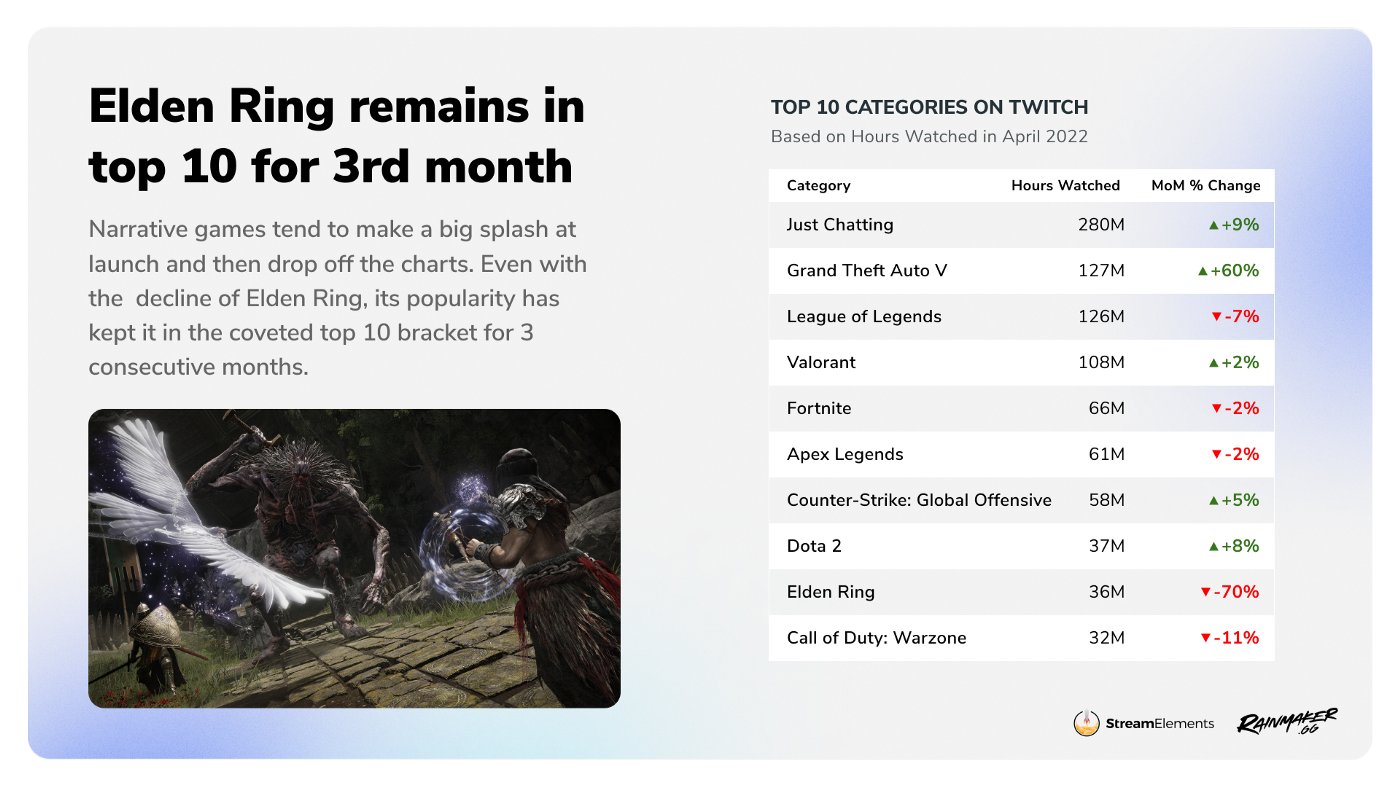 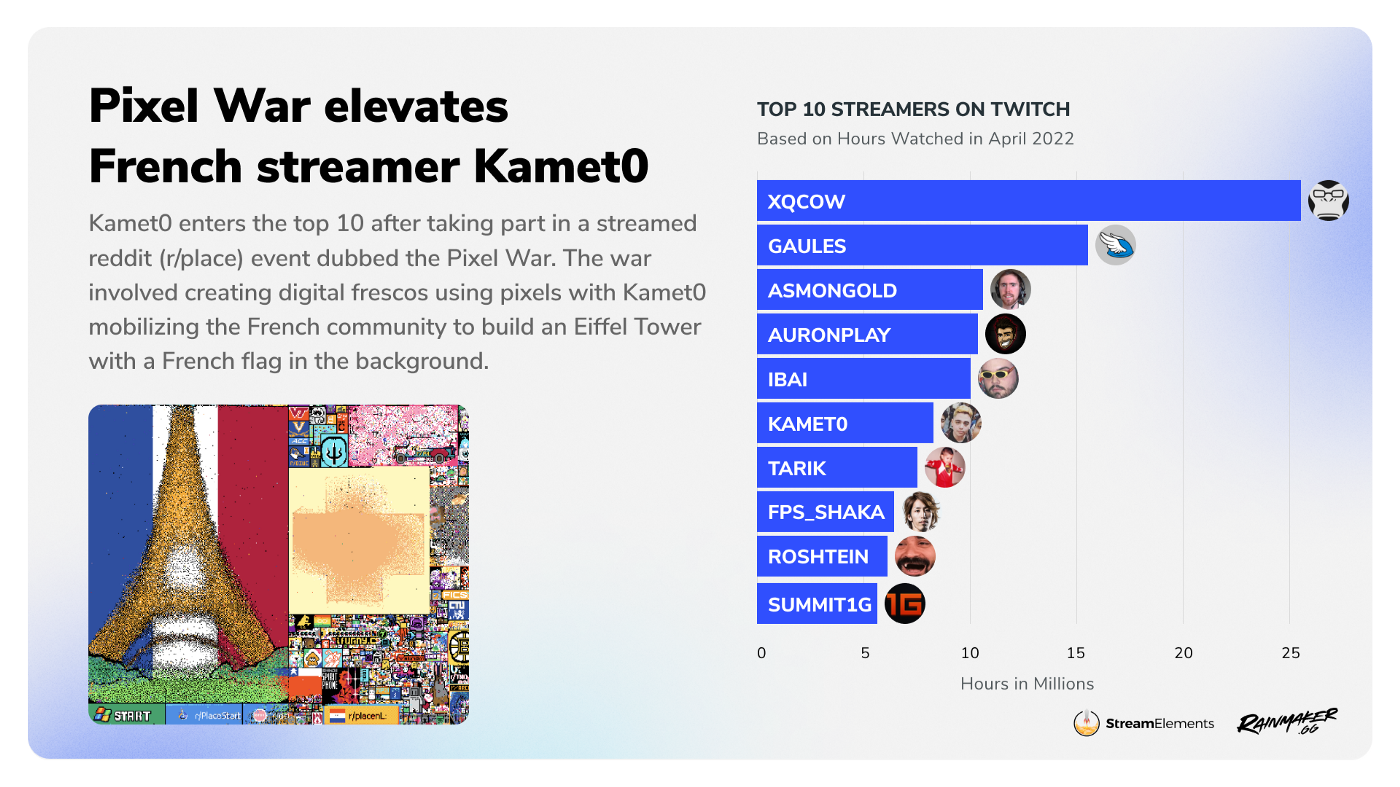 To no ones surprise, xQc continues to dominate Twitchs individual viewership metrics, recording more than 25 million hours watched to sit over 10 million hours over Gaules in second place. Rainmaker also notes that the r/Place phenomena played a big role in Aprils viewership, including propelling French streamer Kamet0 into the top 10 most-watched channels for the month and helping xQc break his all-time viewership record.

Latest comments
No comments yet
Why not be the first to comment?
Featured news
Streaming3 days ago