The classic toughness matters in Magic: The Gathering is gaining a new legendary monk via Rasaad yn Bashir in Commander Legends: Battle for Baldur’s Gate, doubling toughness via Initiative.

Wizards of the Coast dropped a Commander Legends: Battle for Baldur’s Gate (CLB) spoiler today that has big butt fans rejoicing. The slang Magic term, big butt, refers to a creature whose toughness becomes their power level upon attacking. The tribal theme supports Walls and Defender creatures, with Arcades, the Strategist as the ideal commander for a big butt deck. The addition of Rasaad yn Bashir not only supports the Arcades, the Strategist Commander deck but also opens up toughness matters support within Baulder’s Gate Limited via Draft and Sealed. 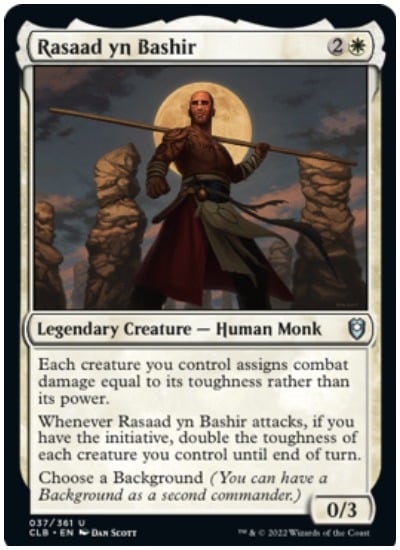 The Initiative is a new mechanic within the CLB set, triggering a Venture into the Undercity dungeon while also having similar qualities to the Monarch mechanic from the first Commander Legends set. Having the Initiative within a Baldur’s Gate Limited match has its benefits, which are now increased when playing big butt creatures with Rasaad yn Bashir as a commander.

It’s still early in the Baldur’s Gate spoiler season but a paring of Rasaad yn Bashir and Dungeon Delver has potential within CLB Limited Draft, especially since Defender and high toughness creatures are often found in the MTG colors White and Blue.

Players can test out Rasaad yn Bashir in an Arcades, the Strategist commander deck when the CLB set releases on June 10 or during Baldur’s Gate Draft from June 3 to 5 at pre-release events.