Team WE are now the only team without a match win in the LPL.

ThunderTalk Gaming finally picked up their first win of the 2022 LPL Spring Split today after taking down Anyones Legends in a close three-game series.

Game one of this League of Legends match began relatively slowly since both teams opted for a more passive early game. AL jungler Xiaohao grabbed an eight-minute Rift Herald and the eventual first turret of the game in the top lane, while ThunderTalk jungler Frigid secured the Ocean Drake as a trade-off. The first kill of the game came at the 14-minute mark when AL took the second dragon and ThunderTalk grabbed an exit kill onto Xiaohao.

The game slowed down once again, where ThunderTalk secured a nearly uncontested Baron at 26 minutes. ThunderTalk gained tempo advantages in both top and mid before ALs XiaoHao found a nice engage onto TT AD carry Puff, which resulted in three ThunderTalk members dying. AL began to find skirmishes and picks onto the ThunderTalk side and climbed back into the game.

But that comeback was short-lived. ThunderTalk landed the game-ending blow after they found a successful fight around the dragon pit. This ultimately led to a ThunderTalk win in game one at 36 minutes. 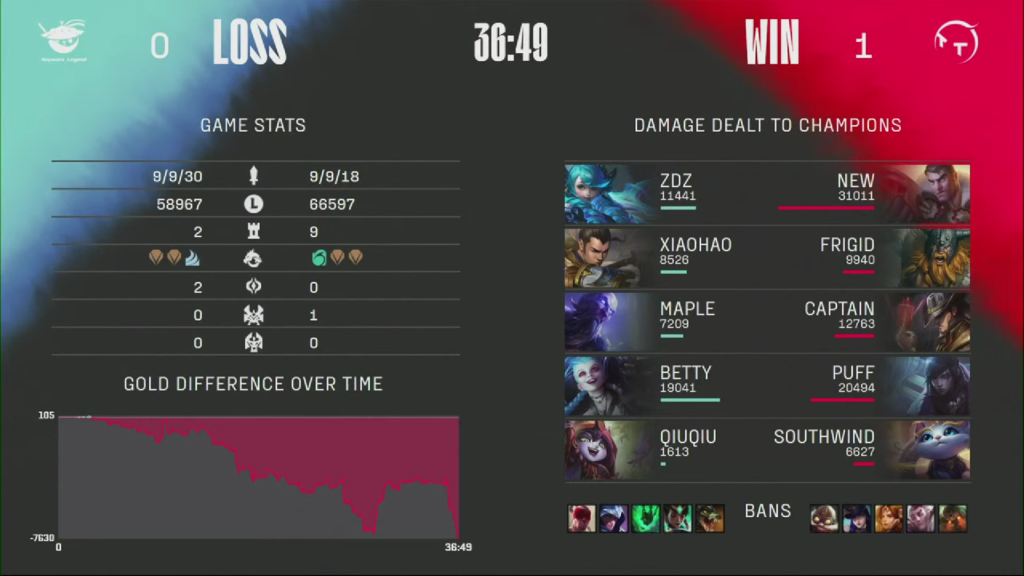 In game two, first blood once again came around the 14-minute mark. ThunderTalk mid laner Captain found the opening kill onto ALs QiuQiu before TT lost four members of their own during the same fight.

The rest of the game completely tilted in AL’s favor. They were able to snowball a lead into all of their lanes, which led to a 27-minute victory, forcing the series to a decisive game three. 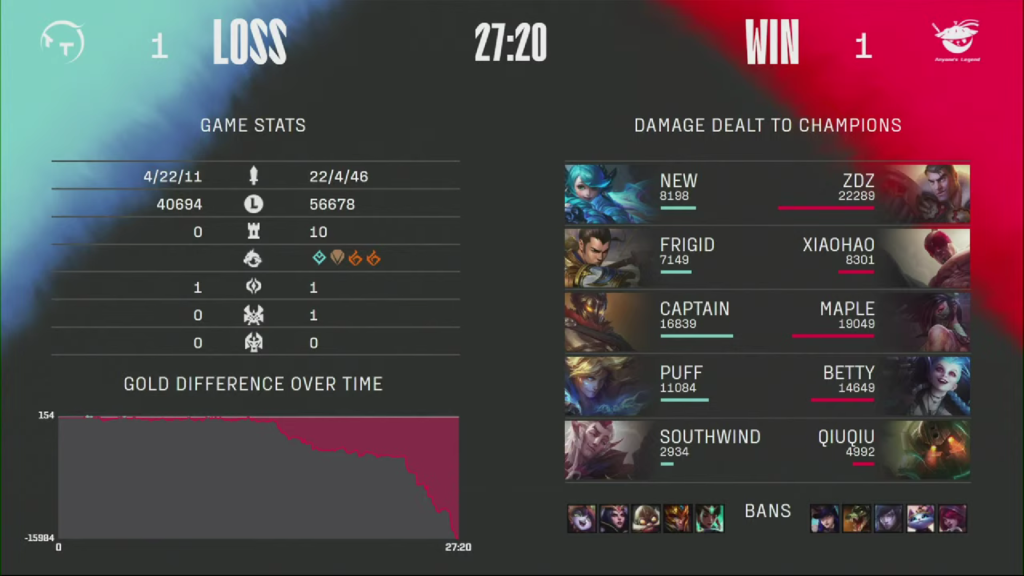 In the game three draft, ThunderTalk were granted blue side and opted to steal the Jinx pick from AL AD carry Betty, who had played the marksmen in the past two games.

The early game sped up slightly this time. First blood took place at the three-minute mark when ALs Maple found a kill onto opposing mid laner Captain before Xiaohao was traded to make the mid lane skirmish a one-for-one.

Both teams continued to trade evenly throughout the early to mid game. Even when a fight broke out around the dragon, they still managed to keep the gold relatively even. This held true up until a fight started behind the Baron pit where ThunderTalk traded their support for four kills onto AL, which broke the game wide open. 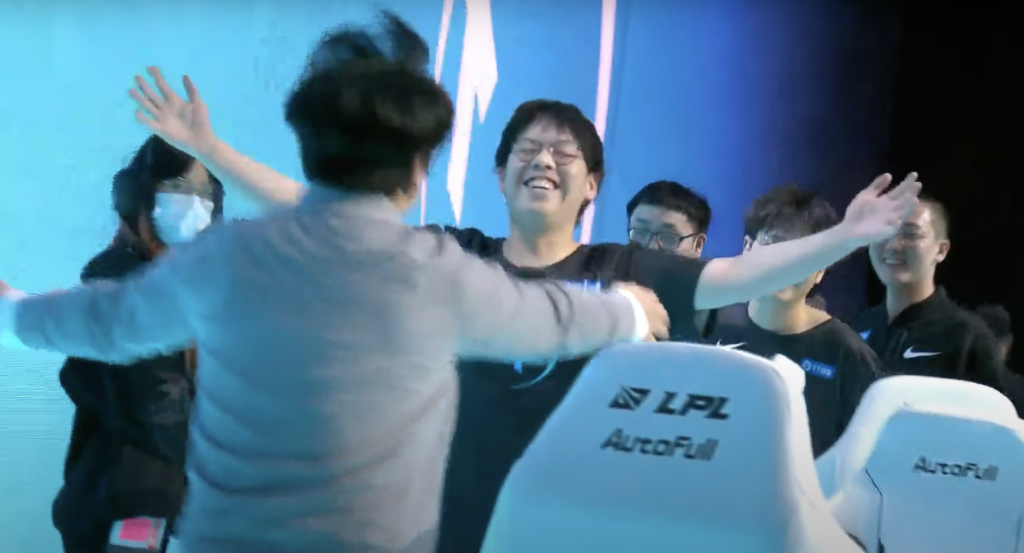 ThunderTalk then immediately turned back to the Baron after gaining mid priority. While AL temporarily halted ThunderTalk’s advancements, the gold lead was too much to come back from and the previously winless TT finally added a victory to their record. 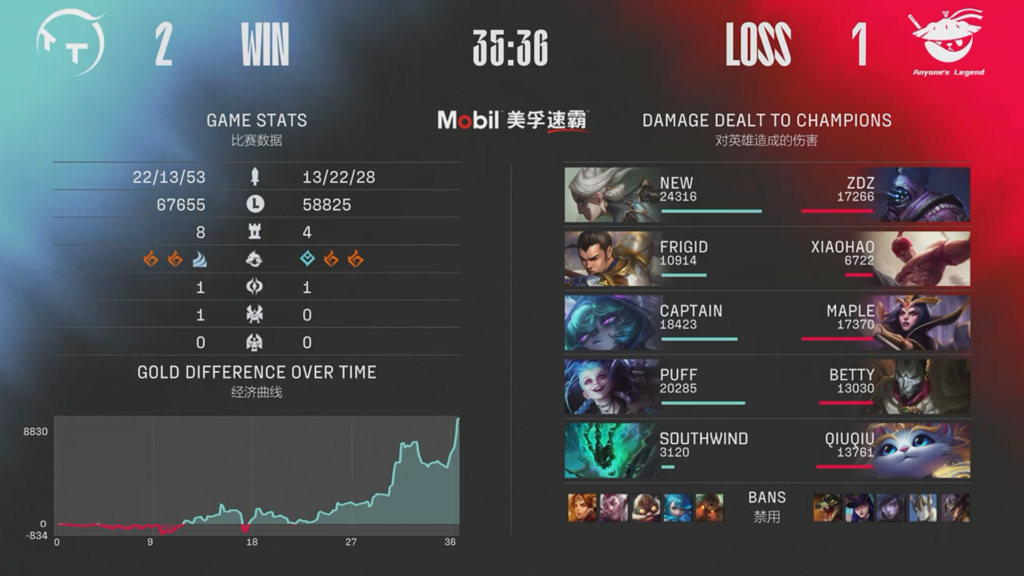 While this was still a messy and passive series from both teams, the win for ThunderTalk marked the end of their winless start to the 2022 LPL Spring Split. With this victory, TT are now tied with a number of one-win teams in the league. Team WE are the only LPL team left with zero wins on the season.

After winning their first game of the 2022 season, ThunderTalk will look to play spoiler when they take on the LPL superteam Bilibili Gaming on Feb. 11.

The post ThunderTalk Gaming have won their first match of the 2022 LPL Spring Split appeared first on Dot Esports.