Let's see who's the real problem.

Overwatch 2s release brought a series of both welcome and unwelcome changes. The game is still in its infancy, but as the seasons roll on, the game adapts. Before the first Overwatchs unfortunate demise, the game had spent 35 seasons changing the meta and maps and creating the FPS experience that it became.

Overwatch 2, however, still has some work to do. This is where the community comes in. Blizzard has a hands-off approach, which gives OW2 players nothing but time to get creative. Players create art, skins, and characters every day.

Among those creative ventures, one Overwatch player’s Reddit post has not only brought back nostalgia for the fans, but could even improve the competitive experience.

In Overwatch 1, there were end-screen extras that showcased other players’ impact in each game. Overwatch 2 scrapped that approach for a more barebones layout. An OW2 player has reimagined the old-school design with a concept of a new end screen.

The theoretical post-game lobby from “Gio_diamondy” on /r/Overwatch (pictured below) adds various stats that highlight the impact teammates had in matches. Heroes that typically don’t have high damage like Widowmaker can be redeemed through certain statistics shown in the postgame menu, per the player’s creation. Characters who have low health and can die easily like Tracer can have their moment of glory with a stat showcasing killstreaks.

It has the potential to help players better understand the role every character has in a match. This could lead to fewer arguments in lobbies, and better matches overall. If implemented, you’d be able to see all the little details from every OW2 battle. 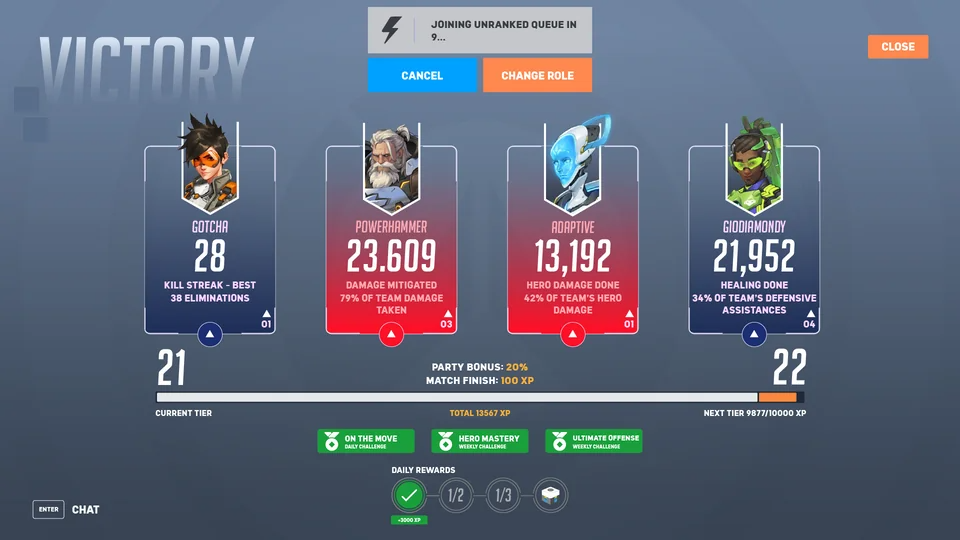 Then the nostalgia floodgates opened, sparking conversation amongst the community. Nothing felt better than an MWP card playing ana, one OW2 player said.

The discussion also included ideas for other returning features like the on-fire system. It provided voice lines that added a bit of spice when a player was playing well, and its a feature OW2 could use to its benefit. Everybody loves to be hyped up when theyre carrying.

The endorsement system is the only thing in place (as well as XP) after the match finishes. Half the time players just endorse the healers/tank because, according to the players, the statistics disappear too fast to really mean anything.

The community has spoken, and the Overwatch 2 devs may have to listen. They should def (sic) add those cards back, said another player, as a full stop to the conversation.

Its a feature that definitely needs to be implemented, according to most Overwatch 2 players. Hopefully, the developers see the traction this Jan. 17 post gathered, and think twice about why they removed the feature in the first place.