The strongest Pokémon of each type, ranked

Do you wanna be the very best, like no one ever was?

The Pokémon franchise has been constantly expanding since its inception in 1996 with the original Pokémon Red and Pokémon Green. Since then, the series has only skyrocketed in popularity over time, leading to a lot of mainline games and spin-offs as well.

With every mainline series game came new additions to the Pokémon roster since the original 150 were released in Generation one. As of 2022, the list of Pokémon has expanded to a whopping 898. But not all of the Pokémon included in that list are as strong as each other, some of them do tend to outperform the others. As such, we have curated a list of all of the best Pokémon of each of the 18 types in the game.

This list will include all Mega Evolutions, Legendary Pokémon and Ultra Beasts, just to be completely thorough. These entries will be based on each Pokémons stat total.

Without further ado, here are the best Pokémon of each type: 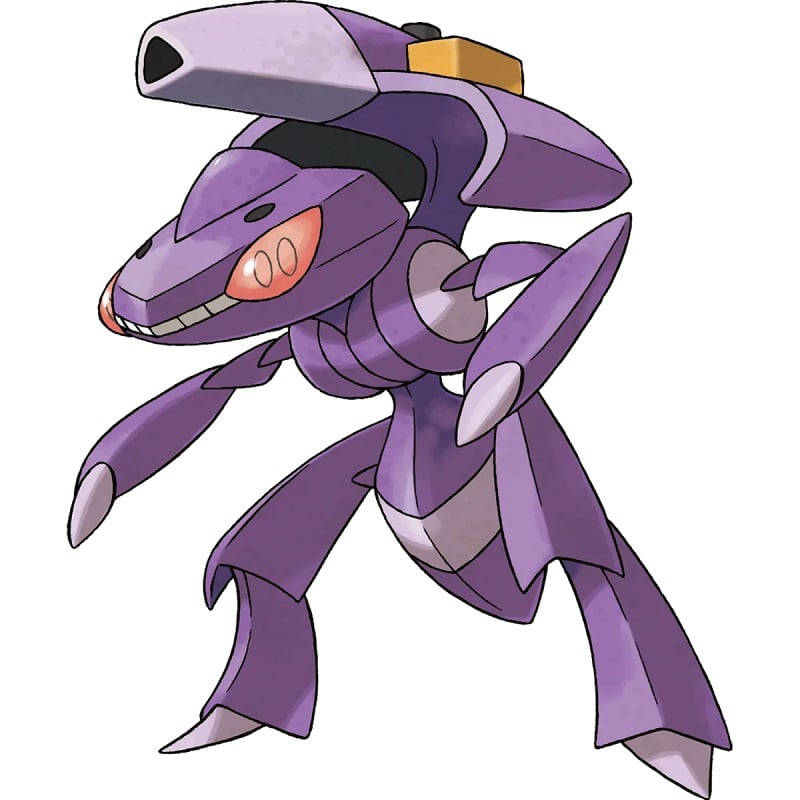 This Legendary Pokémon was introduced in Generation fives games: Pokémon Black and Pokémon White. Genesect is a Bug/Steel-type Pokémon with a base stat total of 600. While this may seem low compared to all of the other entries in this list, its strong typing more than makes up for it in battle.

Genesect also shares this stat total with Mega Pinsir, Mega Scizor, and Mega Heracross, all of which are deadly in the right hands.

This Pokémon counts as a pseudo-Legendary Pokémon thanks to its high base stat total of 600. Its Mega Evolution just takes it up a notch, boosting it all the way up to 700. This overtakes even Yveltal, and later Hoopa Unbound, who previously held this position. 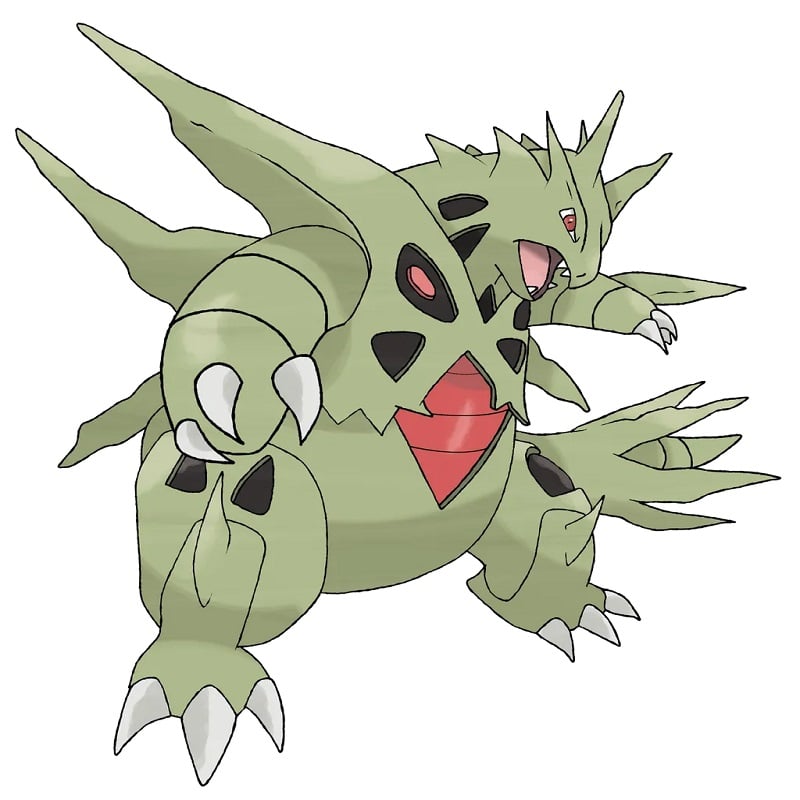 Being a Dark/Rock-type Pokémon, Mega Tyranitar also comes with heavy defenses that are hard to take down in general, as long as he is kept at a distance from Fighting-type Pokémon. 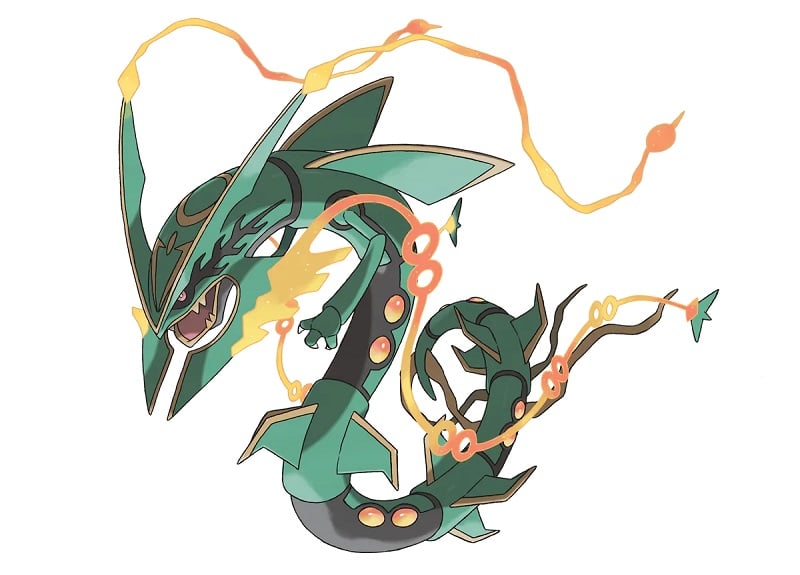 This Pokémon is so overwhelming that it carved out a new category for itself in the competitive scene. If that isnt enough to cement its supremacy, nothing else will. 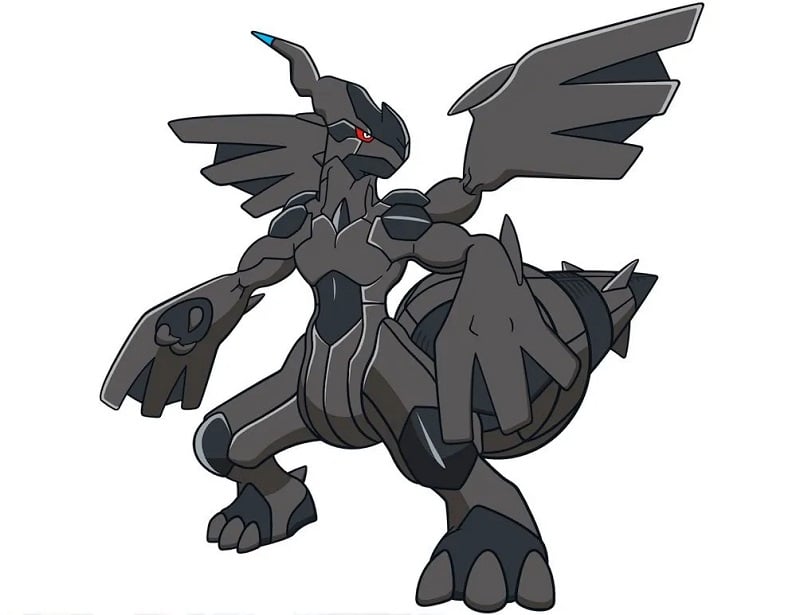 One of the two cover Legendary Pokémon from Pokémon Black and Pokémon White, Zekrom has a powerful typing of Electric/Dragon-type with a stat total of 680, evenly spread out across all primary stats except Speed, which is the reason is just falls shy of that magic 700.

Electric-type Pokémon are generally strong in their own right, but Zekrom stands head and shoulders above the rest, owing a lot of it to his Legendary status and Dragon typing as well. 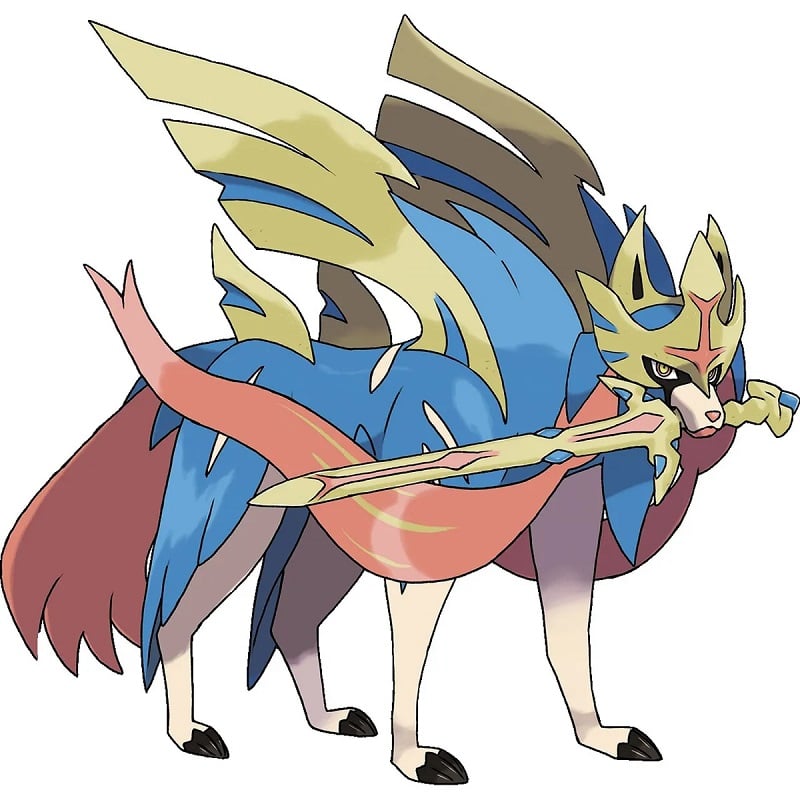 The newest type of Pokémon introduced to the franchise in the Generation six releases of Pokémon X and Pokémon Y, Fairy-type Pokémon was the answer to all of the anguished trainers cries for help against the rampaging Dragon-type Pokémon throughout the previous five generations, with the advent of Hydreigon being the final nail in the coffin.

Zacian, however, is the cover Pokémon of the Generation eight games of Pokémon Sword and Pokémon Shield. Its Crowned Sword form makes it a powerful Steel/Fairy-type, capable of tackling almost any target that trainers throughout the franchise can throw at it, especially with it having the highest Speed and Attack stats of any Fairy-type Pokémon. 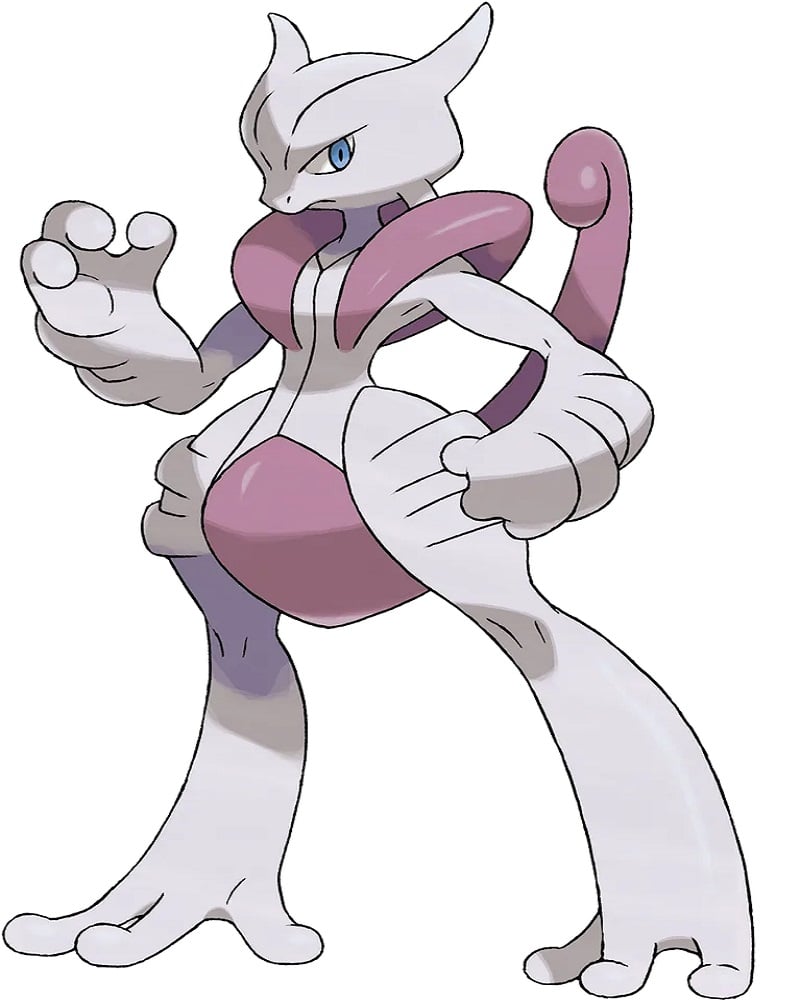 Mewtwo has been a household name in the Pokémon series, known as the strongest Pokémon in the original games. With the advent of Mega Evolutions, Mewtwos power only got even more monstrous with Mega Mewtwo X being the strongest Fighting-type Pokémon while its Y counterpart shares the title for the strongest Psychic-type Pokémon.

If that was not enough, this beast also holds one of the most powerful typings in the game being a Fighting/Psychic-type Pokémon. Taking down one of these almost guarantees a world of pain. 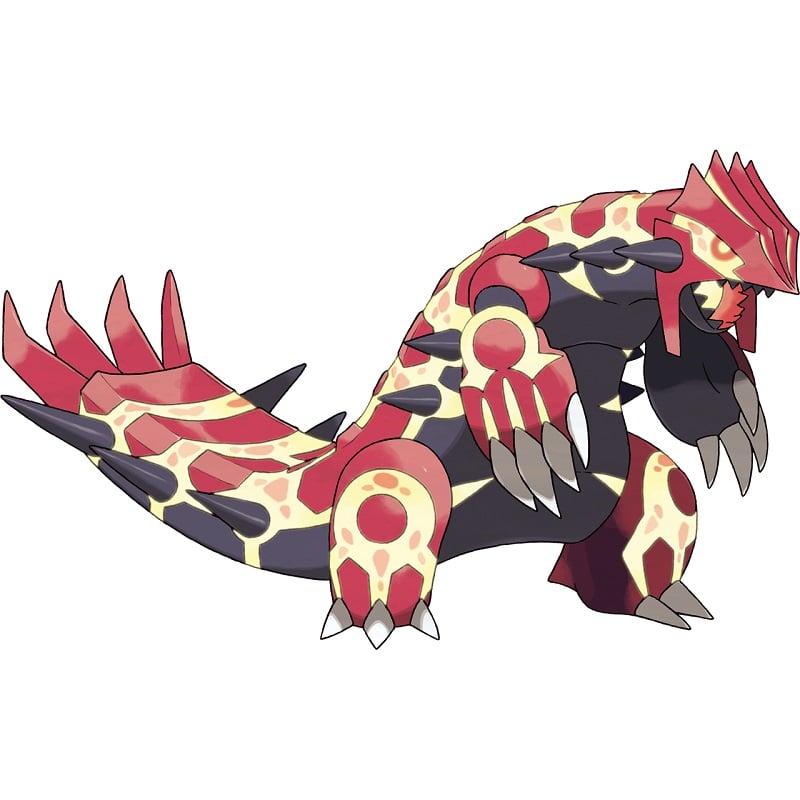 One of the two Legendary Pokémon of Generation three, the creator of all landmasses, Groudon holds the top spot for both Fire-type and Ground-type Pokémon. Primal Groudon takes it a step further in terms of power. With a stat total of 770 and its Desolate Land ability that essentially evaporates its Water-type weakness, there are extremely few Pokémon capable of taking down this behemoth. 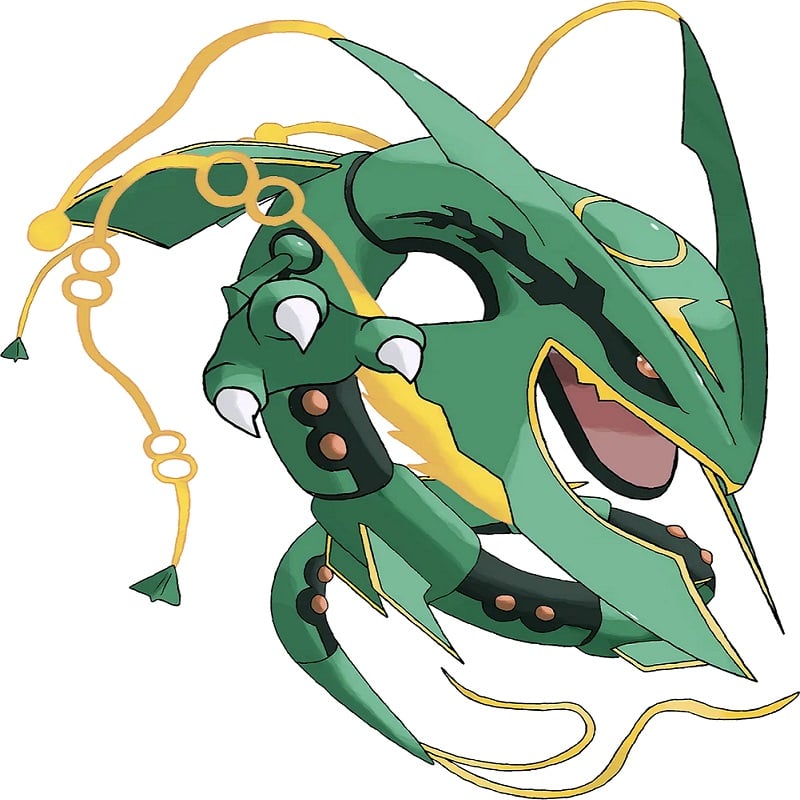 Look who flew back into the rankings. If it wasnt enough for Mega Rayquaza being the strongest Dragon-type, it is also the strongest Flying-type by a large margin. Going from its signature Air Lock skill to the more powerful Delta Stream skill eliminates the rest of its Flying-type weaknesses as well, making Electric-type, Rock-type and Ice-type attacks only deal normal damage to, instead of being super effective against, all Flying-type Pokémon in the field. 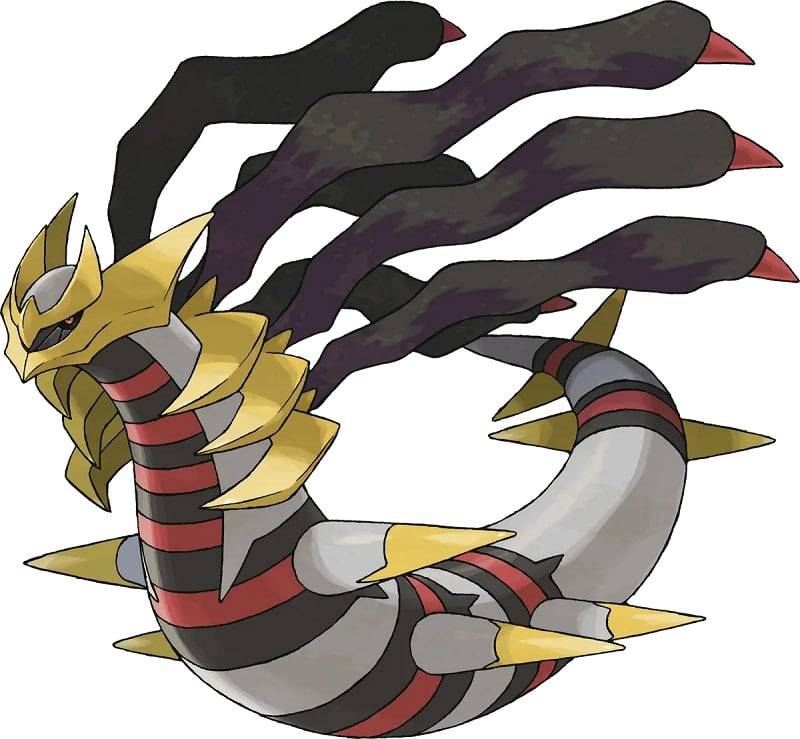 The creator of the parallel Distortion World, Giratina shoots up to the top of the Ghost-type Pokémon list. Being the counterpart to his Time and Space creator siblings, this world-ending beast is as scary as he is deadly. With the dreaded Ghost/Dragon-type combination along with its signature Shadow Force move, fighting Giratina is an equally terrifying prospect in both his Origin and Altered formes.

Giratina shares this stat total with Lunala, Dawn Wings Necrozma, and Shadow Rider Calyrex as well, which leads to a five-way tie if we rank them purely by stat total. 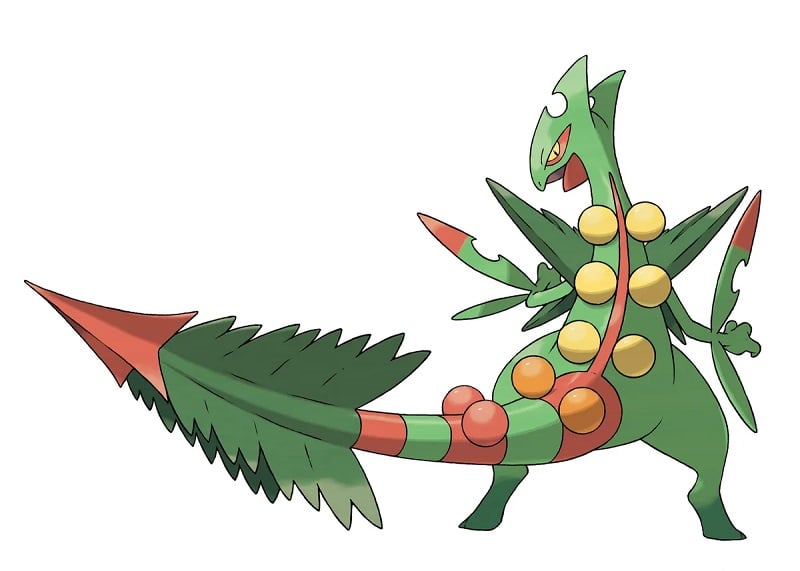 Starter Pokémon are generally picked as such due to their typing and equitable stat distribution. As such, they are all quite powerful by themselves, but some of them tend to stand out from the rest.

Enter Sceptile, a Pokémon that used to be quite popular back in the day, but with the introduction of other Grass-type starters like Torterra, its usage in the competitive scene started reducing as well. That changed when Mega Sceptile was introduced. Adding the Dragon-type made Mega Sceptile incredibly powerful, even overshadowing Mega Venusaur and claiming the top spot for itself. 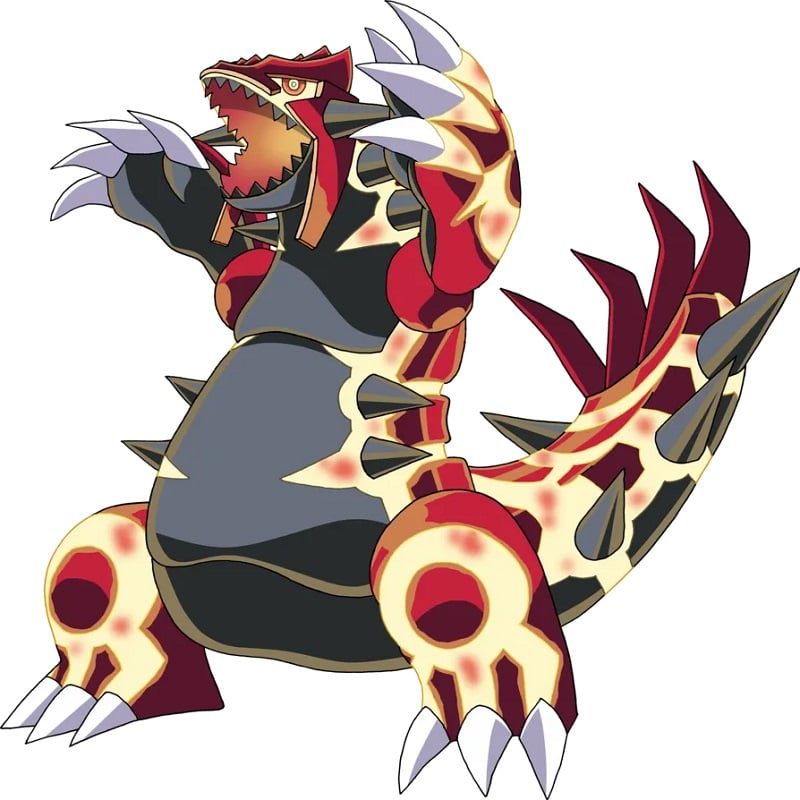 The champion of both of his typings, Primal Groudon makes his return to top the Ground-type Pokémon charts as well. This landmass enthusiast ensures he is stronger than all of the other Ground-type Pokémon on this list, with Desolate Land eliminating his major weaknesses. Legendary Pokémon are powerful in their own right, but adding a Mega Evolution-ish ability with Primal Reversion just makes them incredibly unfair to fight against. 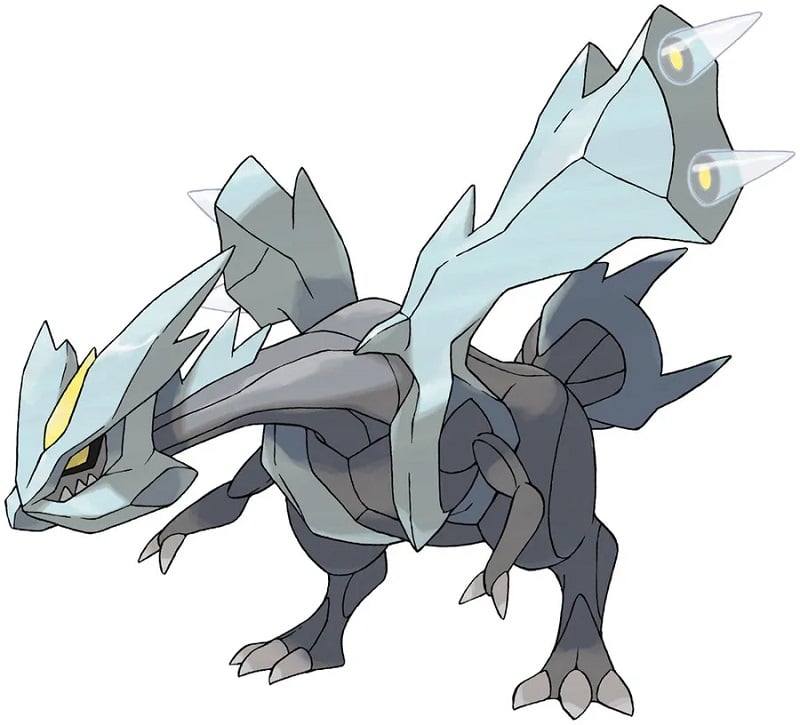 The Ice Dragon from Unova is a monster by itself, but it does not quite make the top of this list by itself. Once it fuses with either Reshiram or Zekrom, this amalgamation of the two fast tracks this Pokémon to the top of the list of Ice-type Pokémon.

Although both variations of Kyurem are strong individually, there is quite a power discrepancy in competitive battling with Kyurem Black being a staple in the meta even today while Kyurem White doesnt quite make the list. Needless to say, each of them is a destructive force of nature that cannot be ignored. 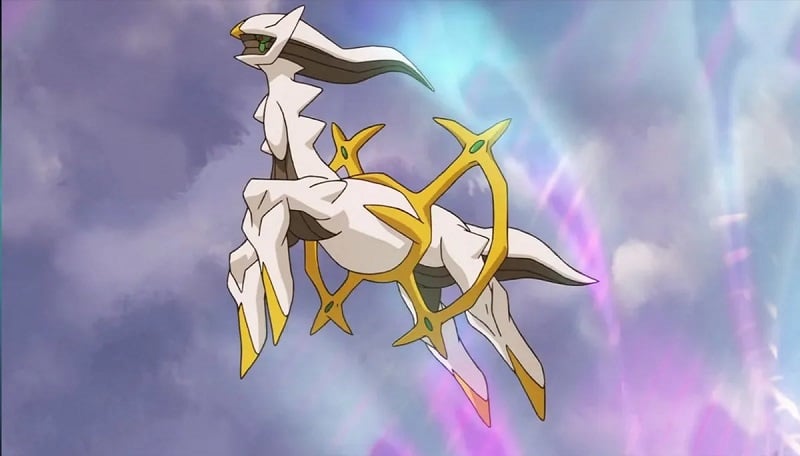 Going from kings to Gods, the God of all Pokémon, Arceus, holds the top spot for the Normal-type rankings. With its incredibly high stat total and its team-wiping Judgment skill (which was made even stronger in Pokémon: Legends Arceus), Arceus is hard to stop by normal means.

If that wasnt enough, Arceus can also morph into any type of its choosing for the occasion, depending on what Plate is equipped. This makes Arceus highly unpredictable and a wild card to have in any lineup. 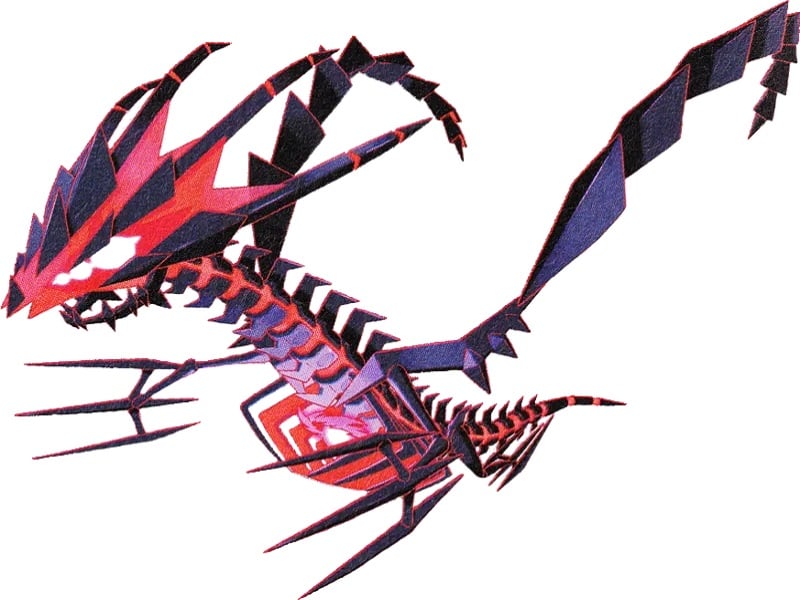 A relatively new entry to the franchise, Eternatus blows away any other Poison-type Pokémon out of the water when it comes to sheer power. Being a Poison/Dragon-type further cements its spot on the top of the Poison rankings.

It has a Dynamax form as well, aptly named Eternamax, which has the highest stat total in the game at an astounding 1125. This form, however, isnt obtainable in-game by any means. Nintendo may make it possible to capture one in a future event, but for now, Eternatus in its base form is here to stay. 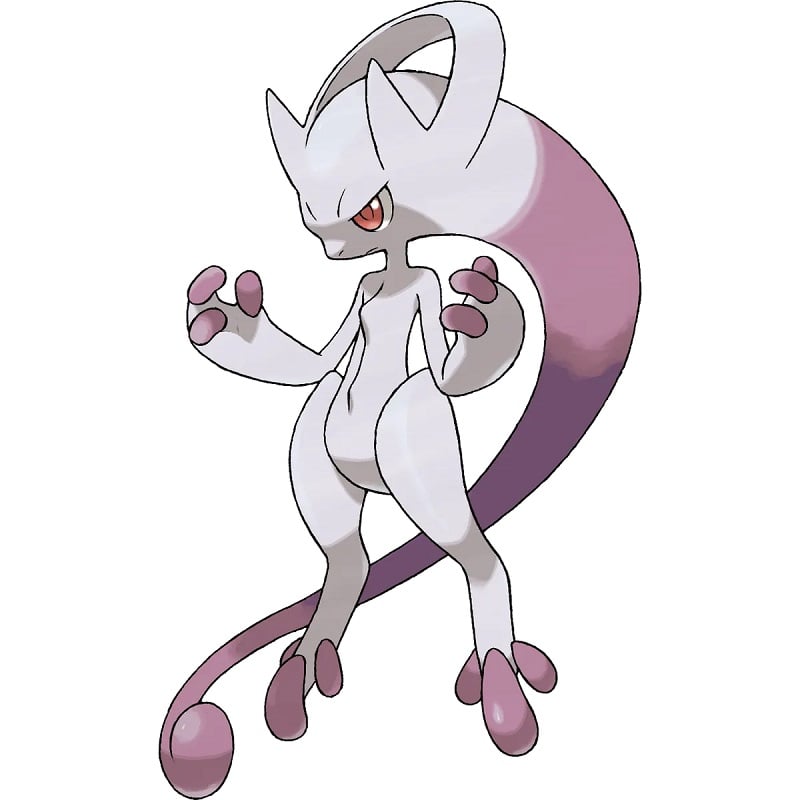 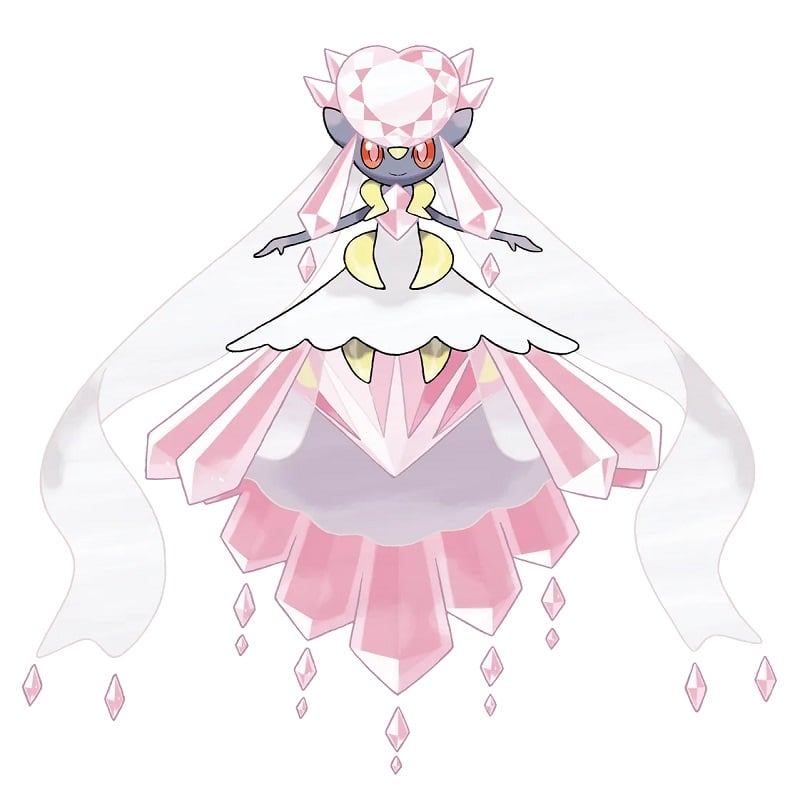 Once upon a time, this Fairy Pokémon was at the top of the rankings until Zacian came along. Today, Mega Diancie takes the top spot for strongest Rock Pokémon instead. This Rock/Fairy-type Pokémon has quite an interesting typing with a high stat total that is quite evenly spread out but, as is with any Rock-type Pokémon, it focuses more on its high defenses. Coming in with a very respectable 164, Diancie is not easy to take down.

The mascot Legendary Pokémon of Generation eights Pokémon Sword and Pokémon Shield, Zacian and Zamazenta in their Crowned forms top the list of all of the Steel-type Pokémon.

Both of them top the charts for their Steel-typing, but they vary in terms of their secondary typing. While Zacian is a Steel/Fairy-type, Zamazenta is a Steel/Fighting-type Pokémon. While both of them hold their own well in any type of lineup, they are only made more formidable by their signature Crowned Sword form and Crowned Shield form. 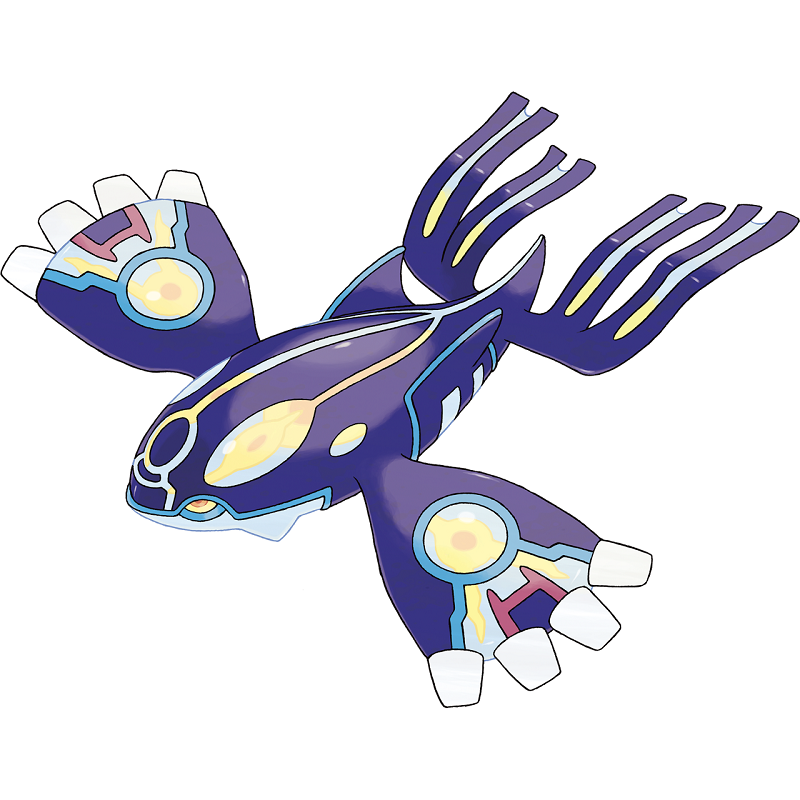 The other half of the creator Legendary Pokémon from Generation three, Kyogre is the creator of the sea in Pokémon lore. Forever locked in an eternal war with Groudon, after their Primal Reversion, both of them become even greater threats.

With a stat total of 770 and a game-breaking ability in Primordial Sea which makes all Fire-type moves fizzle out, this Pokémon tops the rankings for the Water-type and is also always up there in competitive battling, leading Water-type rain lineups.

While most of these Pokémon depended strictly on stat total in the making of this list, some of them that top the charts with similar stats to others are purely opinion-based. Always remember that no matter how powerful the Pokémon is, everyone has a weakness.

Latest comments
No comments yet
Why not be the first to comment?
Featured news
Pokémon8 days ago