Hanwha put up a good fight.

Kwangdong Freecs kicked off the 2022 LCK Summer Split with a dominant 2-1 victory over Hanwha Life Esports today. In front of a returning live audience, they showed strong execution of their compositions and an aggressive playstyle.

Hanwha tried to count on their teamfighting skills by taking ultimate-based compositions with champions such as Galio, Alistar, and Wukong. They were successful in the second game with Karis’ Vladimir and OnFleek’s Viego, winning teamfights despite strong mechanical prowess from The Freecs players.

A massive Gnar ult from DuDu and a QUADRAKILL for SamD are taking us to game 3! #LCK pic.twitter.com/nGBgZsqxCZ

Ultimately, though, The Freecs came back stronger in the last game after taking an early-game focused composition, with jungler Ellim on Nocturne, and mid laner FATE on Twisted Fate.

They executed early ganks to pick up a gold advantage and then snowballed in the mid game to take the objectives from their opponents, before finally destroying the Nexus and earning themselves their first victory of the split.

The team have proved they are strong contenders after qualifying for the Spring Split playoffs and returning with an unchanged roster. Kiin also showcased the full potential of Gwen in the meta, earning himself strong stats in games one and three. He was also crucial in game two even though they lost, successfully locking down targets using his ultimate on Sejuani. 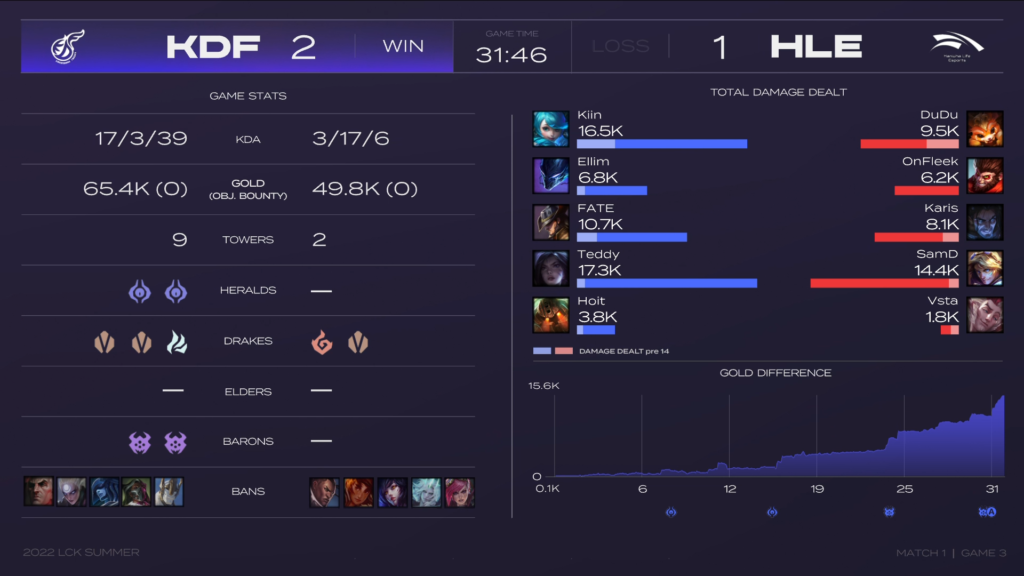 After a last-place finish in the 2022 LCK Spring Split, Hanwha Life made changes to their coaching staff with DanDy and Key joining the roster in April. They seem to have solidified their strengths during the break, as they showed clean coordination in the early game and interesting compositions to adjust to the meta.

“I think they have what it takes to do well in Summer,” The Freecs top laner Kiin said in an interview before the game, even though he felt confident in winning the match.

In the post-game interview, Fate and Teddy said they’re confident in adjusting to the new meta. “There are a lot of teamfights, and it’s fun because I love fights. There are picks like Kai’Sa and Ezreal, and they are a good fit for me,” said Teddy, who was voted MVP of game one on the Daughter of the Void.

Fate, on the other hand, said “with the patch, skirmishes and fights are so important, it’s fun to play but at the same time, really difficult. Because it’s really hard to get a pick by yourself because opponents have more health and armor. It’s tricky.”

In his next matchup, Fate will face off against his former team Liiv Sandbox on June 17 at 3am CT. Meanwhile, Hanwha will try to earn their first victory against Gen.G on June 18 at 3am CT.