The film room: 3 signature strategies to watch for at MSI 2022

Let's break down the playbook from Evil Geniuses, T1, and G2 Esports.

From the powerful emergence of Evil Geniuses’ Danny to the seamless mid-fight adaptation of Faker and T1 and the fearless leadership of G2 Esports’ Caps, practically each team in the world has a player who serves as the focal point of their gameplan.

With the bright lights of MSI pouring down, look for teams to turn to their comfort strategies in late-game teamfights and high-pressure situations. These high-profile, pattern-developing tactics are relatively straightforward to spot and could make or break a team’s MSI run.

Danny perfects the art of pentakills 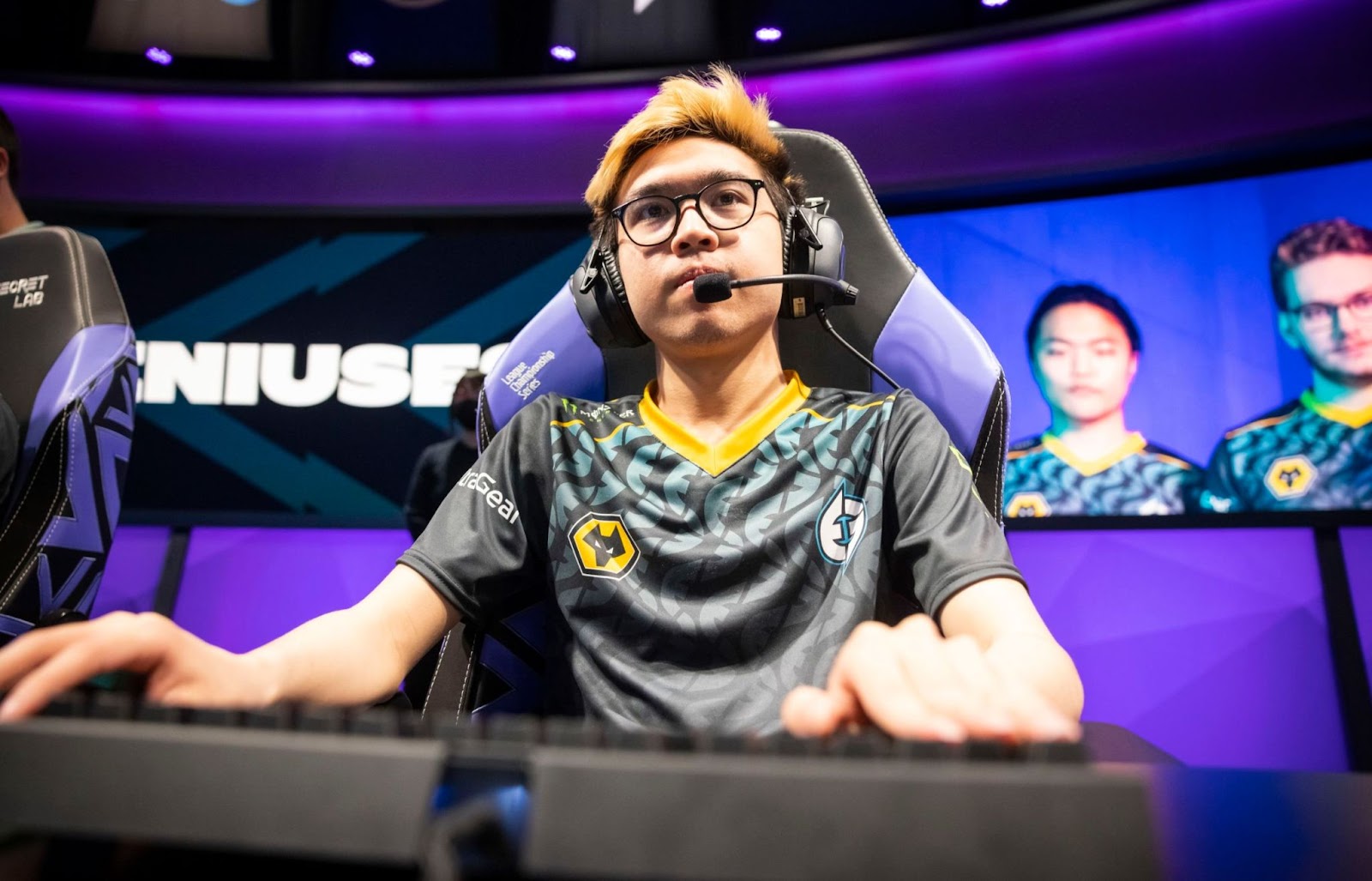 Although EG’s upstart AD carry Danny has only been in the LCS for 10 months, hes already one of the most exciting players in the leagues history.

In teamfights, Danny is an absolute kill machine. If he starts to ramp up in any five-vs-five situation, there’s always a chance fans are going to be treated to a pentakill. Through his first 49 games of 2022, hes already earned fourmore than any major region player has earned in a single season. Reminder: its only May. Theres plenty of time for him to add to that record-breaking statistic.

At MSI, look for Danny to rack up at least one moreespecially if EG continue to feed him resources, just as they have been throughout the Spring Split.

That wasnt always their approach, though. Danny only ranked sixth among all ADCs in total gold share throughout the Lock In tournament. But when the regular season began, EG started to funnel more farm into him. Across the split, Danny had the highest average share of his teams total CS post-15 minutes. He accumulated 34.7 percent of EGs mid-to-late game minion kills, the most by any LCS player. And frankly, the strategy of give Danny the spoon has been working for EG. Hes dealt 30.9 percent of his teams damage on average in games this season.

With so much gold in his back pocket, Danny carries games effortlessly, and its due to his ability to isolate individual enemies and take them down before moving on to his next target. Theres no better example of that than his pentakill on Zeri against TSM in the opening game of the regular season.

In this play, Danny initially uses Spark Surge (E) to slide into TSMs backline and isolate Shenyi for his first kill. He uses the ability again to close the gap between himself and Jojopyuns Realm Warp (R), which places him behind an isolated Keaiduo and earns him a second kill. From there, he forces TSM to retreat as he aggressively flashes over a nearby wall and kills Spica, Tactical, and Huni one by one.

In his now-signature pentakill against Team Liquid in the LCS Spring Split playoffs, Danny kicked things off by focusing down the Baron before swapping his attention to Hans sama, who had been Liquids primary source of damage at the time of the teamfight. Shortly after, he uses Jinxs passive, Get Excited, to move to his left, turning his focus to CoreJJ. As soon as CoreJJ uses Renata Glascs Bailout (W) to keep himself temporarily alive, Danny stops on a dime, moving to his next high-priority target in Santorin. Following two clean-up kills on Liquids tanks, the play, which only lasted 12 seconds, was etched into LCS history.

Danny thrives on champions like Zeri and Jinx that allow him to reposition himself easily in a teamfight. To beat EG and Danny, the objective may be as simple as banning those two champions. This season, Danny has played nearly half of his total games on Jinx and Zeri (24/49) and holds a win rate of over 80 percent with each of them. The teams combined record this year when Danny plays a different champion is a far less impressive 13-12.

To derail the Danny Show, teams have to start making plans and adjustments during the draft phase, long before they load onto the Rift or when Danny has the chance to decimate them in the later stages of a game. 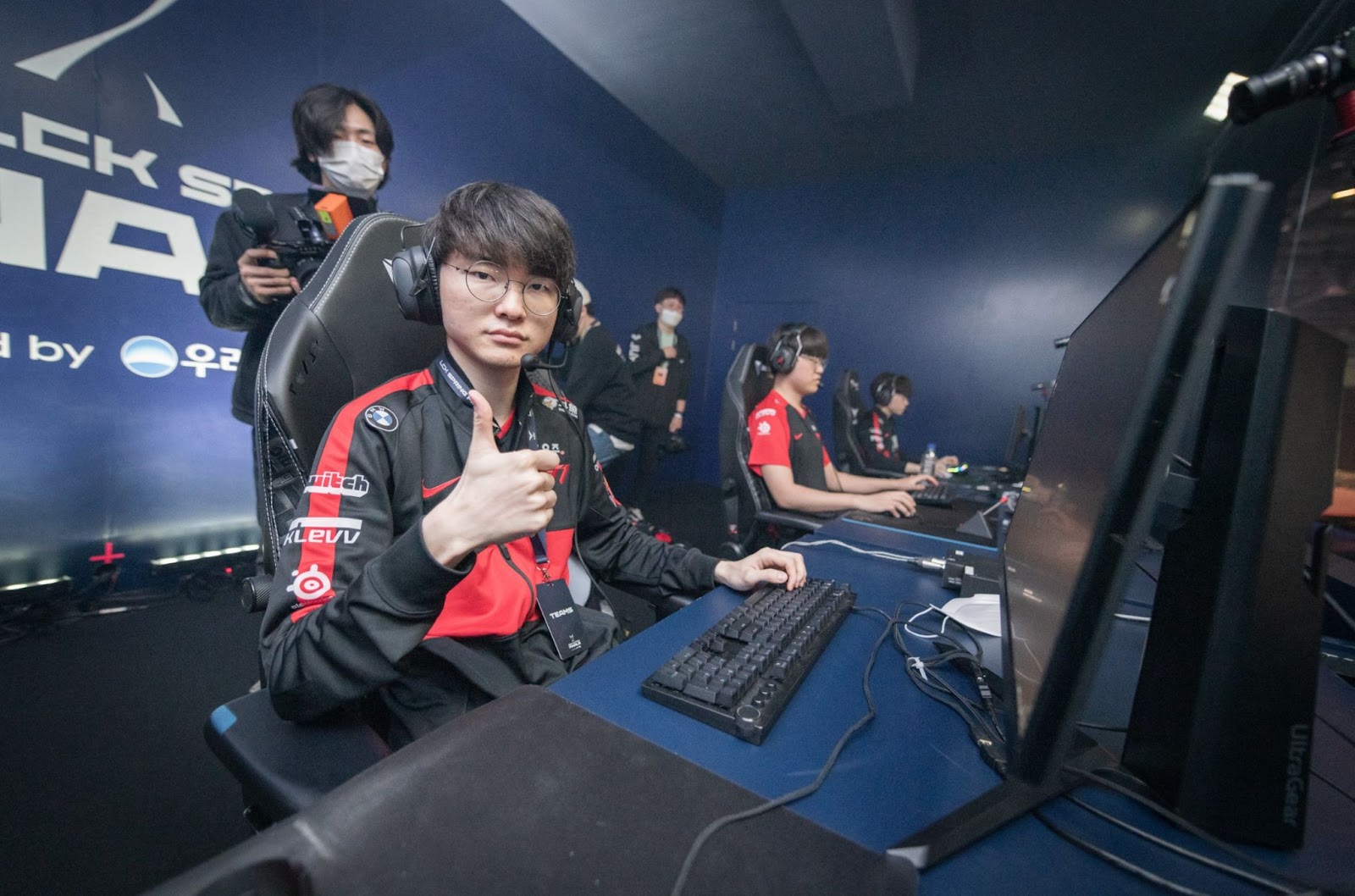 T1s discernable patterns are harder to figure out than most teams, likely because their game-to-game unpredictability is what makes them so good. But the common factor in nearly all of their successful teamfights is the presence of Faker as the teams go button. Practically every five-vs-five situation T1 initiates is kicked off by Faker, who tends to dive headfirst into a crowd of enemy players, giving his teammates enough space to follow through and re-establish the frontline of a teamfight.

Even when T1 is behind, Faker is going to be the player who wills them into a position where they can win a fight, and potentially a game. Fakers aggressive engagements stand on their own, independent of whatever champion hes playing. Whether hes on a pick like Azir who has the inlaid tools to ignite a fight or a damage-focused backline-diver like Corki, Fakers mission remains the same.

A great example of Fakers willingness to fearlessly initiate a teamfight came during week nine of this years LCK Spring Split in a match against Liiv SANDBOX. In game one of that series, Faker picked KaiSa for just the second time in his professional career and used the squishy ranged carry like she was a CC-heavy bruiser.

In this play, Faker uses KaiSas ultimate, Killer Instinct (R), to effectively start the teamfight, grab the attention of Liivs mid-jungle duo of Croco and Clozer, and then immediately flash backward to safety. Liivs attention was disjointed after Faker jump-scared their mid-jungle duo, allowing top laner Zeus and jungler Oner to climb through the window of opportunity that was thrust open, pouncing on a then-clumped-up SANDBOX squad, despite T1s gold disadvantage.

Something T1 have done consistently well in 2022 is swap which players are peeling in a teamfight, allowing them to rebuild the frontline at the halfway point of each encounter. T1 can throw its mid laner and support into the mix to initially engage a teamfight, then have them slowly peel backward while their top laner and jungler make their way to the front of the fight. Just as hockey players take shifts and basketball players switch up on-court formations, T1 are proving on-the-fly adjustments are a part of the winning formula for any pro League team.

If T1 arent confident in their position from a macro standpoint, you can essentially guarantee they wont be confident in taking a teamfight on a micro level (unless, of course, theyre initiated upon by the opposing team). Forcing T1s hand might be the only way to defeat the undefeated giants. If you can get them on the back foot early, you might have a chance at preventing them from pushing their advantage late.

Still, that approach isnt exactly foolproof since its nearly impossible to put T1 behind early. During the LCK Spring Split, T1 had an average gold lead of 1,896 at 15 minutes, according to Oracles Elixirnearly 1,200 gold more than the next-highest mark in that department, which belonged to DWG KIA.

Furthermore, they have a win rate of 88 percent in games this season where theyre ahead at the 15-minute mark, according to Games of Legends. To beat T1 and prevent the late-game fireworks theyve become so famous for, youll need to find yourself in that fortunate 12 percent of teams who somehow grab (and hold onto) the early edge.

G2s solution within the shadows 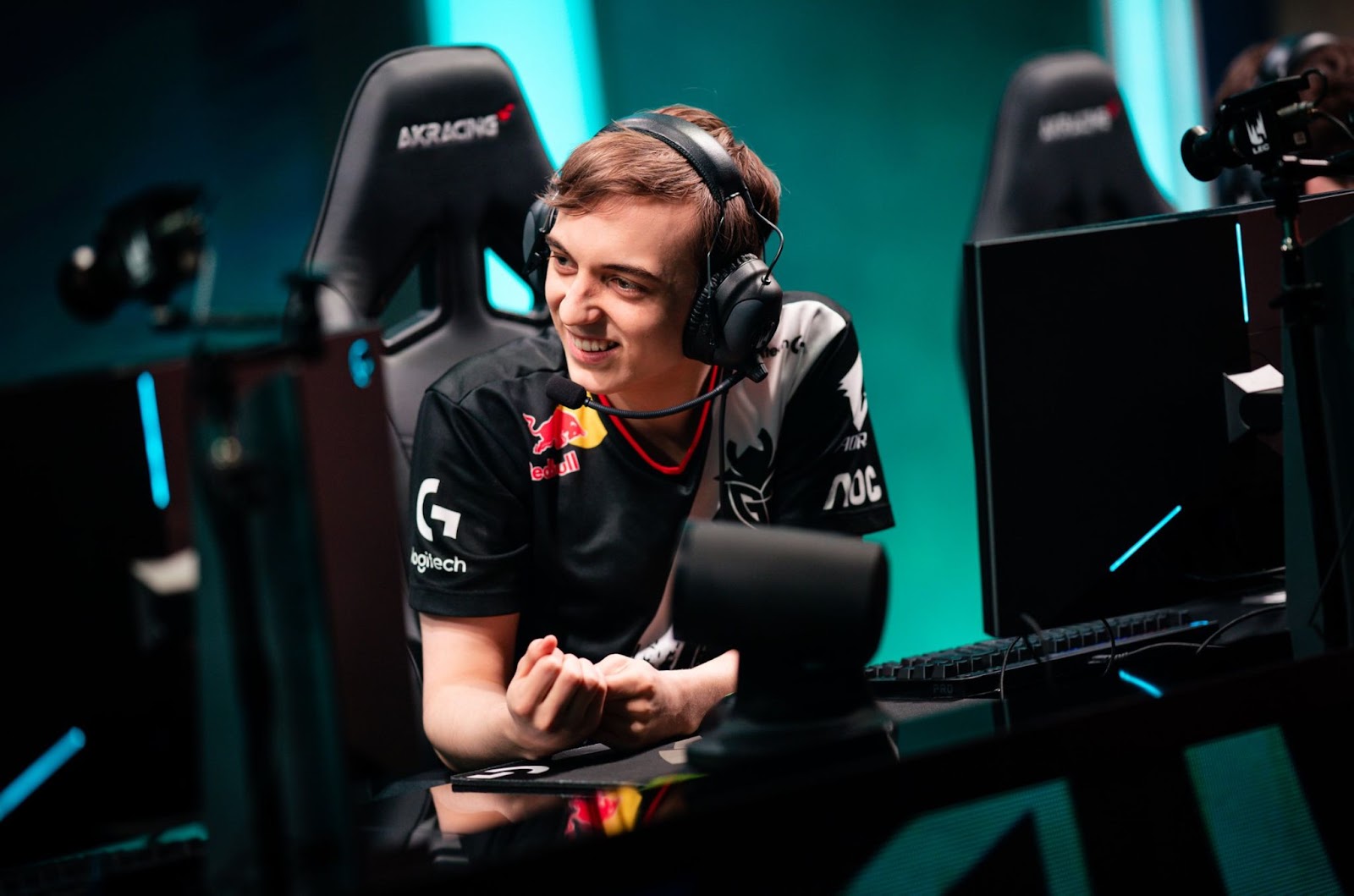 In 2021, fans across the world watched as G2’s kingdom crumbled in one of the most unexpected falls from grace in European history. It was also one of the worst seasons for the teams superstar mid laner Caps. Across the five and a half years hes been in the LEC, the 22-year-old only has three events where hes had a KDA under three: the 2017 World Championship, MSI 2018, and the 2021 LEC Summer Split playoffs.

After G2s massive rebuild at the end of 2021, however, Caps looks revitalized. The superstar mid laner is playing with renewed confidence, leading G2 in kill participation, while holding nearly even damage and kill shares with his new top laner and ADC, according to Oracles.

G2 have found the perfect recipe for success, especially with their destructive mid-to-late game teamfighting. Their explosive skirmishing skill had multiple teams looking for a solution, especially during the spring playoffs, but the answer was always thereit was just lying in wait within the shadows.

During the postseason, G2 often placed Caps on a champion that could either burst forward past the enemy frontline or sneak behind the opposing backline with a deadly flank. Whether he was zipping around on Ahri or jumping forward with Sylas, Caps continuously surprised enemies with a sudden rush of speed and damage from the fog of war.

For example, G2 were down 4,000 gold at 36 minutes during the third and final match against Fnatic in the playoffs. The team pushed Fnatics minion wave to gain Baron priority but was forced into a teamfight. Instead of staying grouped with his team, Caps immediately jumped over the Baron wall for a flank, causing Wunder and Humanoid to hesitate and give G2 time to re-engage.

Another example of Caps great positioning comes from G2s first playoff match against Rogue. At the start of the encounter near the dragon pit, Caps sat on a control ward, hidden from his opponents. The situation looked like the start of a front-to-back teamfight, but Caps bided his time, unseen until he locked down Trymbi with a well-placed charm that dropped the support almost immediately.

G2 used this as a green light to start the fight off with Targamas and Jankos diving in, while Flakked stood back and fired away. Caps continued forward, taking down Larssen, while the rest of the teamfight dissolved for Rogue as they stumbled away to lick their wounds.

Anyone who faces G2 must realize that if Caps has the right tools for the job, he will look to dive to the backline in most teamfights. The best counter is by maintaining vision on all five members of the team and stretching out a fight so the four other members of G2 can’t follow up on Caps first move.

Fnatic, for example, pulled off a great counterplay during game three of the spring semifinals against G2. During this fight, Hylissang pulled the trigger by hooking Targamas but immediately died. This, however, prompted Wunder and Razork to jump onto Flakked, causing the rookie marksman to path down and away from the bulk of the fight.

Caps, on the other hand, saw Humanoid and Upset alone on the other side of the skirmish and dove forward in an attempt to assassinate one of the targets. Because the fight had been spread so thin, however, he didnt have much support from his teammates. Meanwhile, Wunder outplayed Jankos, Flakked, and Targamas by hitting a Gangplank barrel that deleted both Braum and Xayah.

Keeping tabs on Caps should be a huge priority for any team facing against G2 at MSI because it will allow them to maintain relative control over a fight without worrying about a cheeky flank from the side.

Latest comments
No comments yet
Why not be the first to comment?
Featured news
League of Legends17 minutes ago