Mobile shooters make for some of the most popular games Android and iOS have to offer. Many fan-favorite FPS titles have trickled down into pocket-sized form, including big names like Call of Duty, PUBG, and Apex Legends, ready to bring the adrenaline rush of hitting headshots in handheld form. There’s also plenty of other top-tier FPS shooters on mobile that aren’t as widely recognized, ready to be discovered and enjoyed at a moment’s notice.

The competition is fierce for the best free-to-play FPS games for mobile. Re-playability, ease of controls, how smoothly the game runs on mobile, graphics, and overall gameplay are all key considerations.

Here are the best FPS games for mobile, ready for gamers to jump into the action. 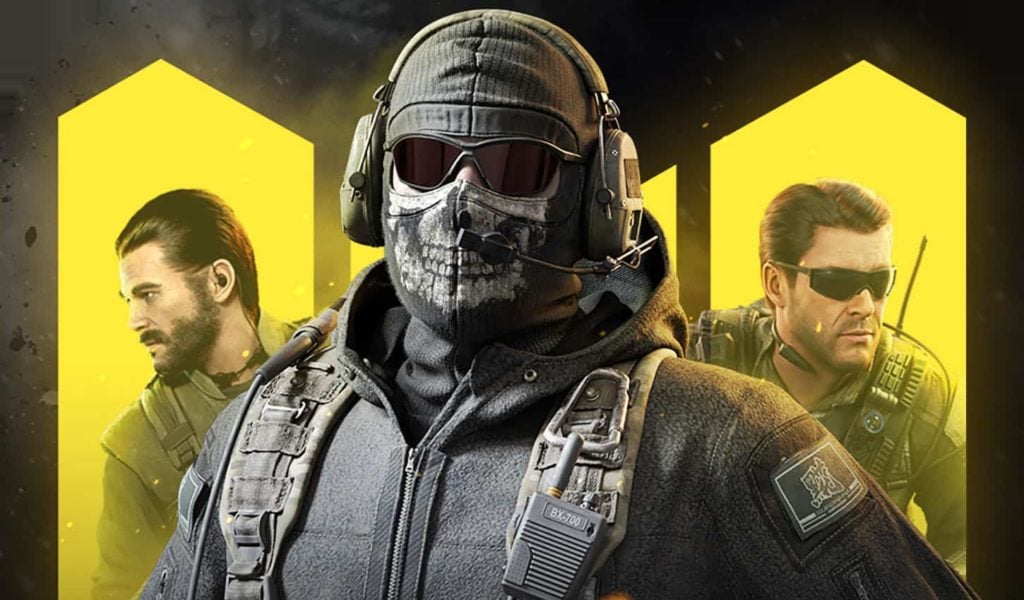 Developed by the same team behind PUBG Mobile, Tencent was hired by Activision to develop a Call of Duty adaptation in handheld form. The result is Call of Duty: Mobile, which offers an action-packed experience across numerous playable game modes. Team Deathmatch, Search and Destroy, Domination, Free-for-All, and Battle Royale are all at players’ disposal, many of which long-time COD players will instantly recognize.

Call of Duty: Mobile has given PUBG a run for its money, becoming the go-to shooter destination for many mobile gamers. The FPS features excellent gameplay, impressive graphics, easy-to-use controls, and a player base substantial enough to ensure you’re unlikely to wait around for too long before the next match starts. There’s even a competitive esports scene amassing tournaments with lucrative prize pools. 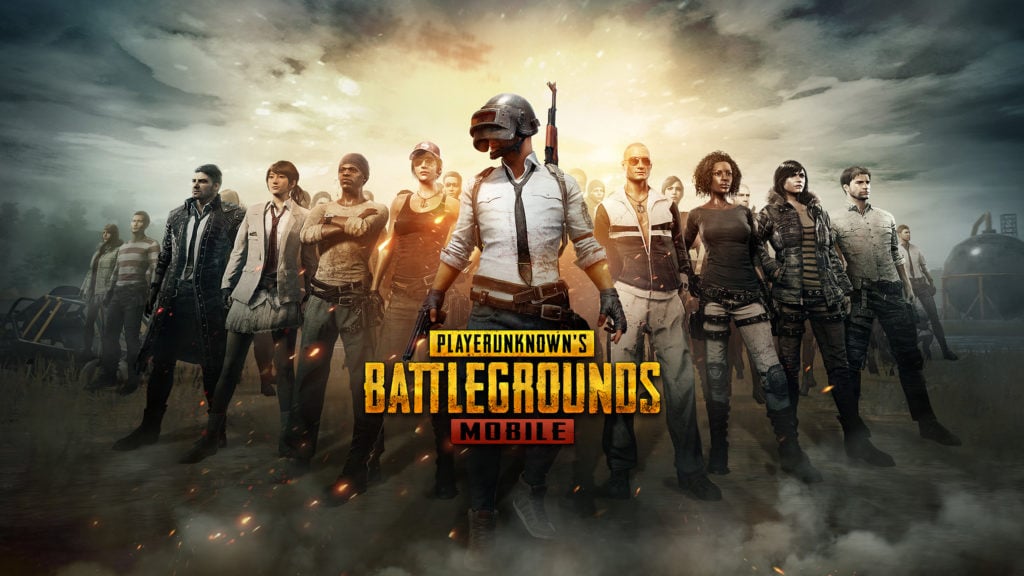 PUBG Mobile rolled out in March 2018, bringing the original PC battlegrounds into handheld form. Since its release, it’s gone on to be one of the most downloaded and played games on both Android and iOS. In fact, PUBG Mobile is more popular than its PC predecessorand it’s not even close, surpassing 700 million downloads and averaging over 40 million daily players. That pales in comparison to the PC version, averaging just over 200,000 players in April 2022.

PUBG Mobile‘s gameplay is smooth and easy to customize, offering a number of graphical settings users can play around with. Using the same tried-and-true formula as the original iteration, PUBG Mobile pits 100 players on an island in true battle royale fashion, although there’s smaller maps and other game modes, too. Parachute onto an island either solo, duo, or with a squad, and take out the other survivors in an intense firefight, looting weapons, attachments, and medical supplies along the way. For many, PUBG Mobile is considered the go-to shooter on mobile. 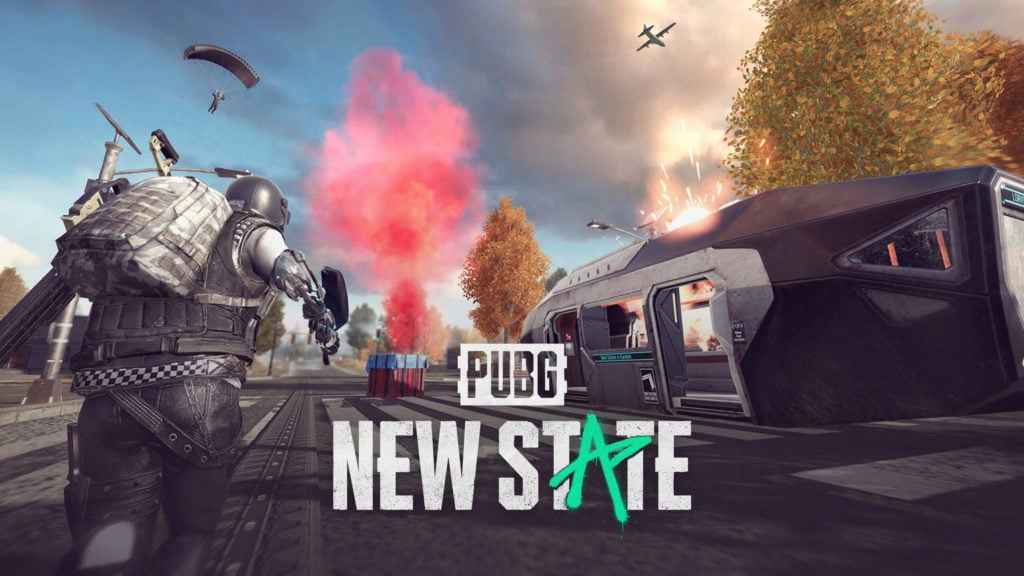 Parachuting players into a futuristic world, PUBG New State offers a fresh take on the original PUBG formula. There’s still plenty of traditional PUBG infused into the gameplay of New State, but the setting is a few decades into the future, taking place in 2051 on a map titled Troi. Two new vehicles include the Volta, a brand new sports car, and the Vulture, a futuristic chopper-like motorcycle. There’s also fully operational drones for delivering supplies around the map to fellow teammates, or baiting unsuspecting enemies.

New State still feels like the battle royale millions have grown to love in PUBG Mobile, but with an in-the-future twist. The principle here is still the same: 100 players engage in an intense firefight on an island until only one player or team remains. There’s also a familiar blue zone that closes in, forcing the action until the final circle remains. For many, New State offers a fresh take. If you’re a fan of PUBG Mobile, New State is worth the price of admission. 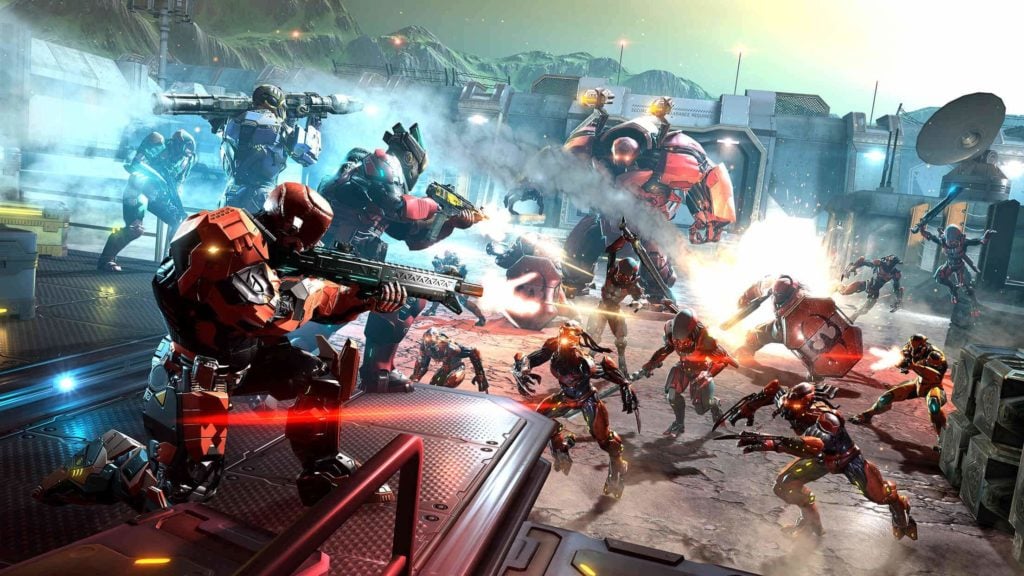 If you’re a fan of Destiny, Halo, or Gears of War, Shadowgun Legends is going to feel familiar. The shooter offers fast-paced action, intense co-op gameplay, and an epic storyline to partake in. There’s also a socialization hub where players can communicate, encouraging player interaction that’s often lost in many other mobile titles.

The FPS revolves around a group of mercenaries called Shadowguns who hunt down and eliminate aliens, known as The Torment. The customization options for your character and guns are endless, leading to gameplay that constantly feels different. Controls are user-friendly and effective enough, with just enough buttons on the screen to get the job done. However, the mechanics don’t feel as satisfying as some of the bigger names on this list. Still, Shadowgun Legends offers a handheld sci-fi experience well worth the free install. 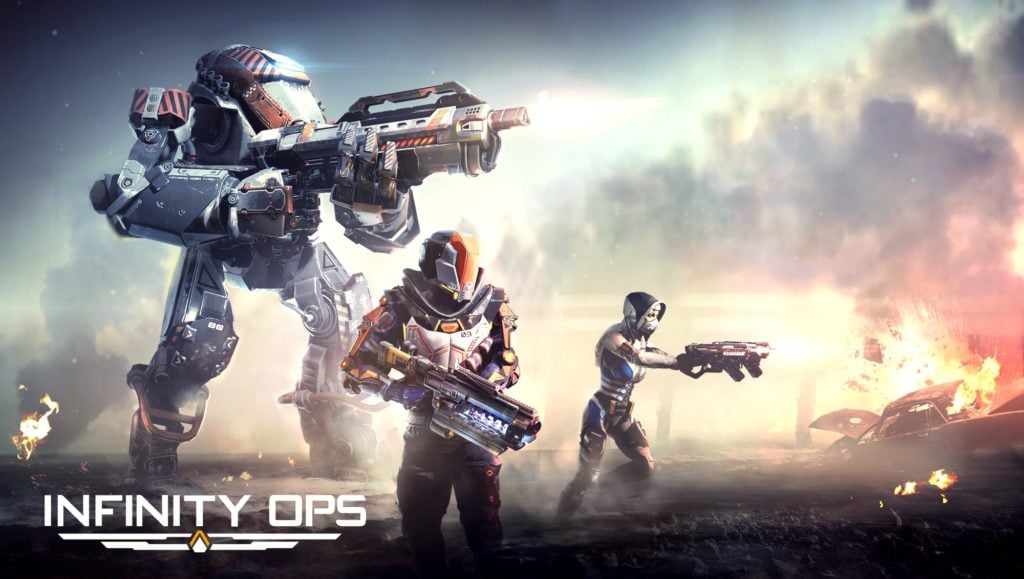 Set in the future, Infinity Ops feels similar to Battlefield 2042 and Apex Legends in a number of ways. The sci-fi FPS features various character classes to choose from, paired with a wide array of weapons and armor to suit up with, allowing players to wreak havoc on their opponents in endless ways.

Players can enjoy multiple game modes, including Team Deathmatch, Hardcore, Deathmatch, Duel, Launcher Battle, and Base Defense. Each mode is capable of providing a fresh take on the FPS formula.

On top of being well-optimized, making Infinity Ops run smoothly on most devices, the gameplay is loaded with features that make the experience even better, with stand-out movement and shooting mechanics. That’s not always an easy thing to achieve on mobile, yet Infinity Ops does a fine job of hitting the mark. The in-game textures and visuals are also impressive, particularly the weapon and character designs, making for an attractive shooter to play. All in all, Infinity Ops provides a solid free-to-play FPS experience that shouldn’t be overlooked. 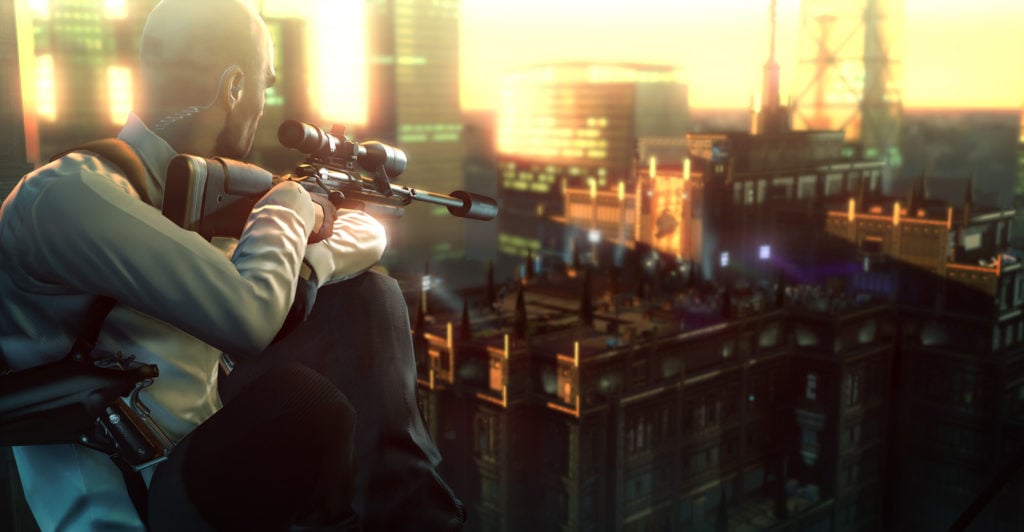 Hitman is one of gaming’s most-storied franchises, with the first release Hitman: Codename 47 rolling out all the way back in 2000. Fast forward to today, and everyone’s favorite hitman returns to mobile form. Developed by Square Enix Montreal, Hitman Sniper offers a handheld FPS experience that centers on stealthy gunplay. Not to be confused with Hitman Go, a turn-based mobile puzzle game, Hitman Sniper focuses mainly on sniper rifle gameplay, taking out enemies from afar.

As a professional killer, players patiently wait for the right moment to take out certain targets. Patience is critical in completing the variety of mission objectives at your disposalwhich might not be an attribute every gamer is looking to exercise. Each sniper rifle shot needs to be carefully assessed before you take it. Mindlessly firing your weapon in trigger-happy fashion isn’t going to get you too far in Hitman Sniper. As you progress, improve your sniper rifle to bigger, more powerful versions, unlock weapon attachments, and head into varied mission challenges that each offer something fresh to accomplish. 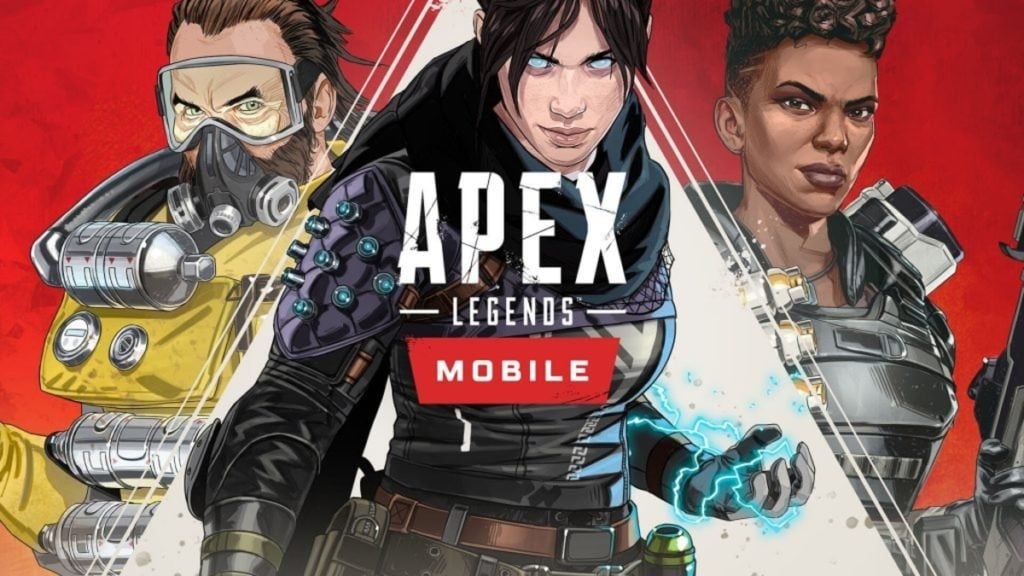 Set within the immersive Apex Legends universe, Apex Legends Mobile offers a pocket-sized version of the same formula as the original PC version. It features a strategic battle royale affair, with a cast of legendary characters to choose from. Intense squad battles and speedy combat make up the Apex Legends Mobile experience.

The gameplay puts 60 players onto a single map, making for fiery engagements. Players choose between one of eight Legends, with each possessing their own unique skills, styles, and fighting ability. The goal is to eliminate the opposing teams, which is best accomplished by electing teams that combine Legends’ skills that complement one another. Strategy is a key element of traditional Apex, and that statement stays true with Apex Legends Mobile. With the game’s limited regional launch ending, Apex fans can expect to see a global launch in the latter part of May 2022. 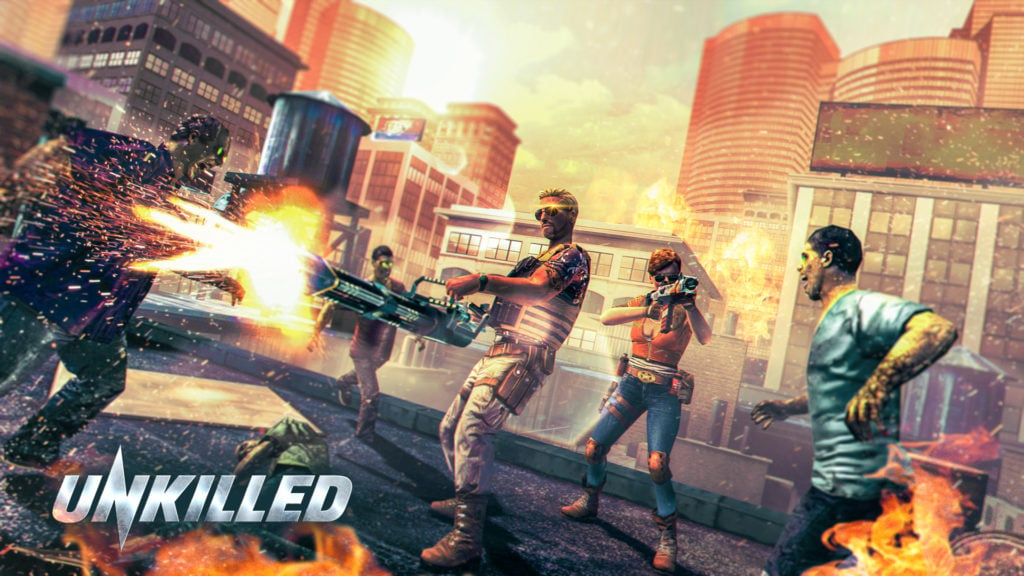 From the creators of Shadowgun and Dead Trigger, Unkilled pits players in a New York setting to take on endless hoards of zombies.

There’s dozens of weapons to choose from to take on the undead, from machine guns, to sniper rifles, to hatchets. Choose between one of five characters, where you can personalize your appearance and weapons in countless ways. A major highlight of Unkilled is the ability to engage in co-operative multiplayer, allowing players to team up with others. Taking on waves of zombies is always better with friends, especially when you come across the variety of boss fights in Unkilled, which adds to the replayability of the shooter.

PvP multiplayer mode is also available in Unkilled, perfect for taking a break from eliminating zombies. For a good-looking, intense, and fun zombie shooter best played with friends, Unkilled delivers.

Latest comments
No comments yet
Why not be the first to comment?
Featured news
Best of18 days ago

Read more
Best of20 days ago