Check out some of the best third-party Joy-Cons around.

Nintendo Switch owners know all too well the perils of Joy-Con drift. The gradual wear down of the thumbsticks on Joy-Cons has plagued the console since its 2017 launch. Because of the phenomenon, many Switch players have turned to third-party controllers as replacements for the dual gamepads. Here are the six best third-party Joy-Cons of 2021.

What to expect with third-party Joy-Cons

Third-party controllers can be hit or miss when going in blind. Some companies sell cheap knockoffs that could break within the first few uses or not at all. While the Joy-Cons on this list are top selections among gamers, anything outside of this list should be double-checked. Companies like Nacon and Nyko have made third-party controllers for over a decade and have good standing within the gaming community.

However, there is one caveat that comes with third-party controllers: missing features. Switch Joy-Cons have an IR sensor that gauges how close or far something is from the controller. They can also scan collectible Nintendo Amiibo figures that give bonuses or exclusive features in games using the near-field communication (NFC) sensor.

Other features include HD rumble, which is similar to the DualSense controllers haptic feedback, and motion controls for specific games. Third-party controllers are less likely to have the NFC Amiibo feature, same with the IR sensor or HD rumble. Most players dont use the NFC sensor when gaming as it requires buying Amiibos, and the IR sensor is barely used in games outside of Ring Fit Adventure. 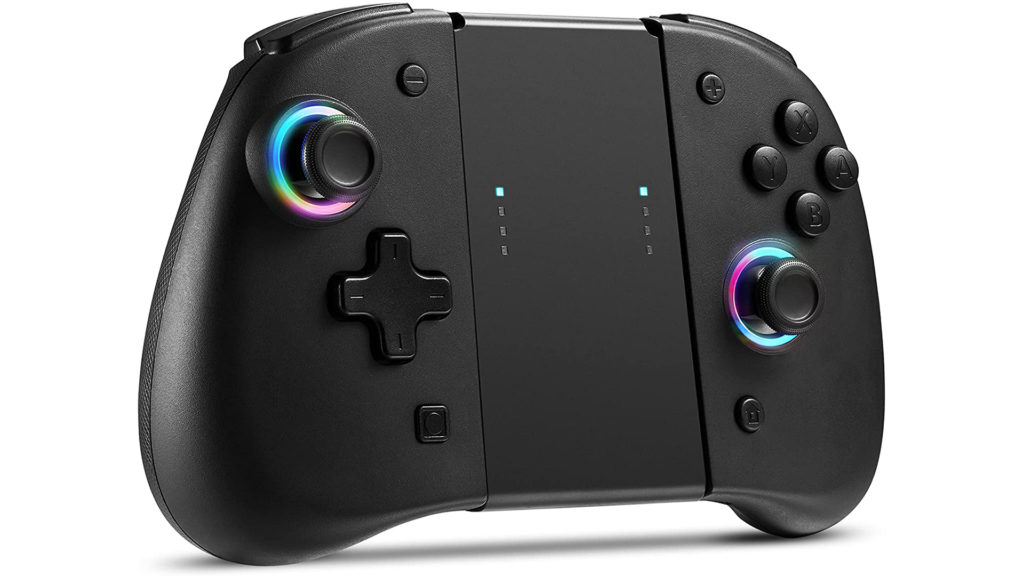 Image via binbok via Amazon

With its Pro gamepad design and special LEDs, the binbok Joypad for Switch is the best overall on this list. The binbok Joypads LEDs surround the concave thumbsticks on both controllers. The shells of the controllers are rounded, giving it more of an ergonomic feel than the original Joy-Cons small and flat shape.

The LEDs come in eight different colors: red, orange, yellow, green, cyan, blue, purple, and rainbow. The colors can be displayed in three different lighting modes, including two breathing effects and a static color mode. On the left Joy-Con, the directional buttons are replaced with a D-pad, which many gamers prefer on a gamepad.

Binboks Joypad comes with programmable macro and turbo buttons, which is common among most third-party gamepads. It also has a gyroscope for motion controls and four adjustable rumble settings ranging from light to heavy. When not mounted on the Switch, players can also use these Joy-Cons either with or without the grip and individually.

While it doesnt support HD rumble, the custom rumble settings might make up for it for some users. Amiibo scanning is also missing, in addition to the IR sensor, but both features are sparingly used in among Switch titles. 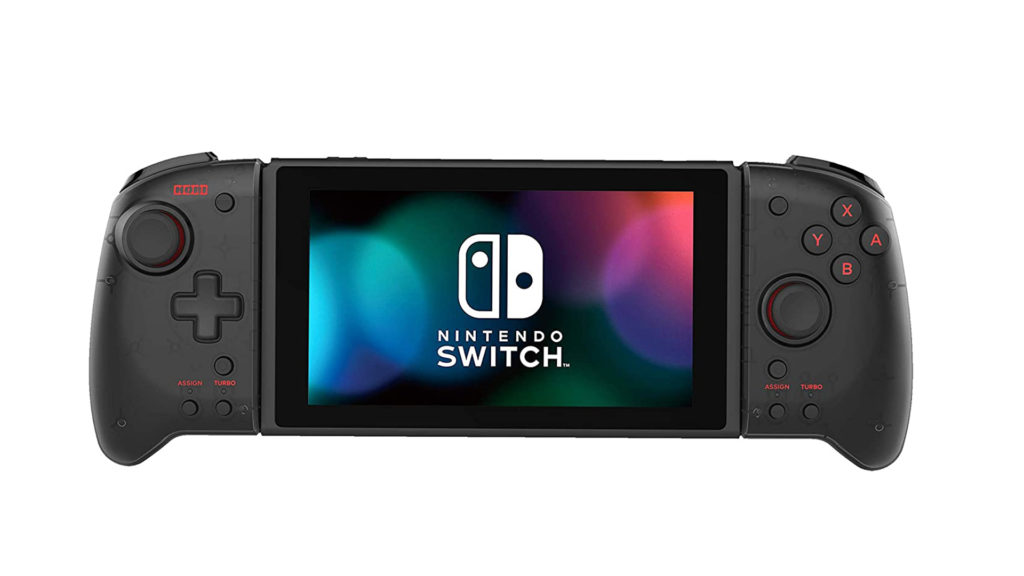 Image via Hori via Amazon

Coming in as the only officially licensed third-party controller on this list, the Hori Split Pad Pro is for those who prefer to use the handheld mode of the Switch. This gamepad gives the feeling of holding a full-sized gamepad with an additional programmable button on the backside of each controller. Despite the more prominent form factor, the Hori Split Pad Pro can fit with the Switch docked.

A drawback of the Split Pad Pro is that it is unusable unless it is attached to the Switch. Other controllers on this list can use the Switchs rails and grip or a custom one. It also doesnt have any features expected from an officially licensed controller, like HD rumble or even motion controls, which is disappointing. 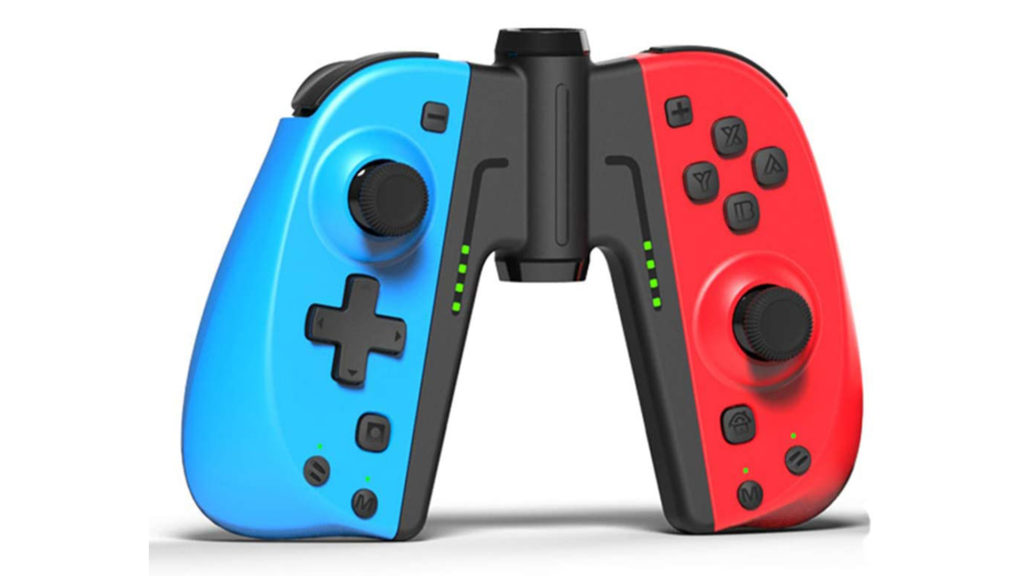 Image via KINVOCA via Amazon

The KINVOCA C25 JoyPad has a unique grip to mount both Joy-Cons. It also comes with turbo and macro buttons, motion controls, and individual charging ports for each Joy-Con. Where this third-party controller shines is in the versatility of its grip and enhanced thumbsticks.

Unique to the KINVOCA C25 is its universal grip that works with other third-party Joy-Cons, including many on this list. Although the grip is universal, the controllers are not as they cant work with the original Joy-Con grip. It comes with concave thumbsticks and a Y-shaped USB-C charging cable to charge both controllers simultaneously. These Joy-Con also come with larger ZL and ZR shoulder triggers.

Like most other third-party controllers, these Joy-Cons dont support HD rumble, Amiibo scanning, or have an IR sensor. It is also consistent with the other controllers on this list in terms of features. In comparison to other third-party Joy-Cons, however, it is among the most popular selections available. 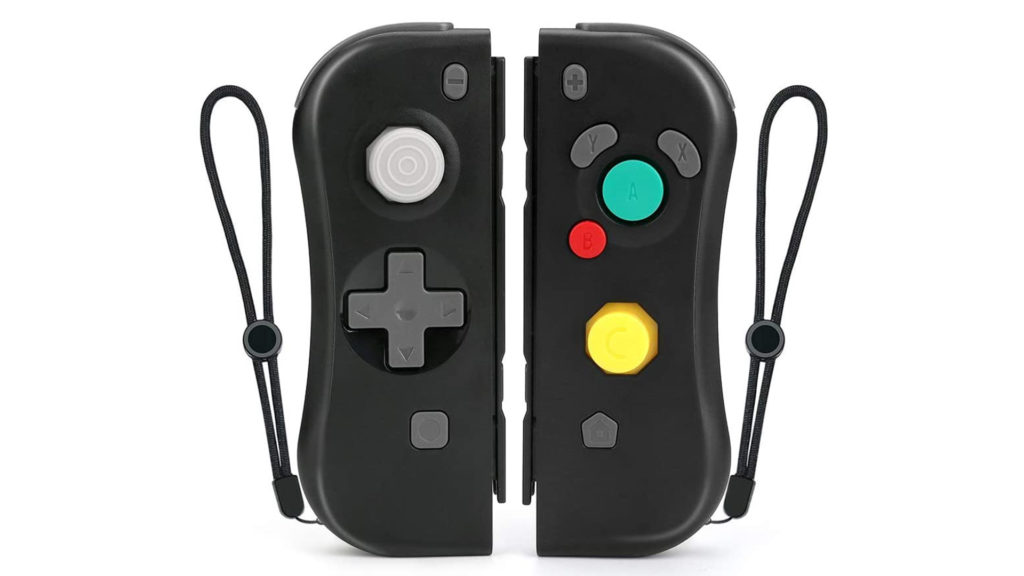 Image via BestFire via Amazon

These Joy-Cons are the only ones on this list that come with Amiibo support. Smash Ultimate players tend to use Amiibos more than the average Switch user, so it is a welcome feature. Additionally, although the shape doesnt match the original Gamecube, the face buttons on the right Joy-Con match the location of its inspiration. Those who prefer using an adapted Gamecube controller to play Smash Ultimate should feel more comfortable using these Joy-Cons rather than the standard.

Like other third-party controllers, BestFires Joy-Cons dont have an IR sensor or HD rumble. Instead, these controllers use a dual rumble motor like all of the other controllers on this list but cannot control the level like binboks Joy-Cons can.

BestFires Joy-Cons are also among the lowest on the list in terms of battery life, with six hours of battery life using rumble. The battery can be extended with the rumble turned off, but many Smash players prefer to use rumble during matches. 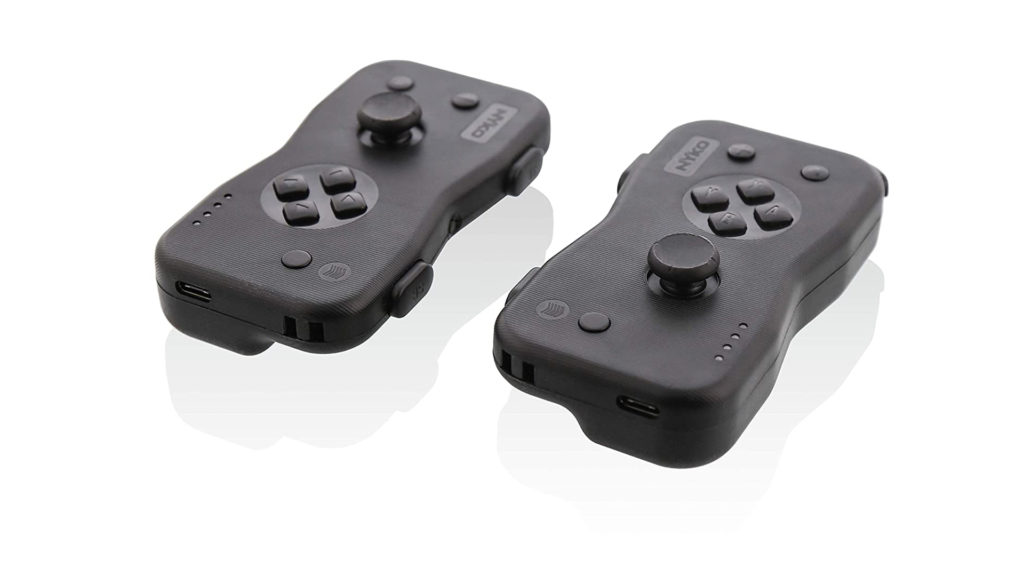 Image via Nyko via Amazon

Rounding out this list is the Nyko Dualies. Unlike the Hori Split Pad Pro, the Nyko Dualies cannot mount onto the Switch or even the grip, for that matter. What the Dualies do have are detachable thumbsticks.

Thumbsticks can wear down pretty easily, especially in games that require spinning them. They can also be slippery depending on the materials used. Having detachable thumbsticks means that more comfortable custom sticks can replace them.

Additionally, the individual charging ports on the controller allow a user to charge one Joy-Con during games without having to charge the other one simultaneously. This feature is useful when multiple people are playing on the Switch, and a controller needs to charge. Standard Switch Joy-Cons only charge when attached to the console, meaning a player would need to sit out until it recharges.

Similar to the other controllers on this list, the Dualies have turbo buttons and larger ZL and ZR shoulder buttons. The Dualies also have dual vibration motors but do not support HD rumble.

Like most other third-party controllers, the Dualies support motion controls but cannot scan Amiibos or have an IR sensor. However, these Joy-Cons are the only ones that cannot mount onto the Switch or a grip on this list. Because of this, some may want to look for other options on this list.

The post The 5 best third-party Joy-Cons of 2021 appeared first on Dot Esports.

Latest comments
No comments yet
Why not be the first to comment?
Featured news
Hardware2 hours ago

Everything we know about AMD’s refreshed Zen 3 Ryzen CPUs