Welcome to the hi-res life.

SteelSeries is a Danish company known for its gaming peripherals. It was founded in 2001 and went on to build many groundbreaking products like the worlds first gaming headset and one of the first mechanical gaming keyboards. The brand continues to make some of the most trusted gaming products and has partnerships with esports organizations like Fnatic and FaZe Clan.

The Arctis series of headsets is one of SteelSeries more well-known products. Arctis headsets are known for their solid construction and outstanding sound quality. There are currently many models in the range with different feature sets and pricing.

These are the best SteelSeries headsets. 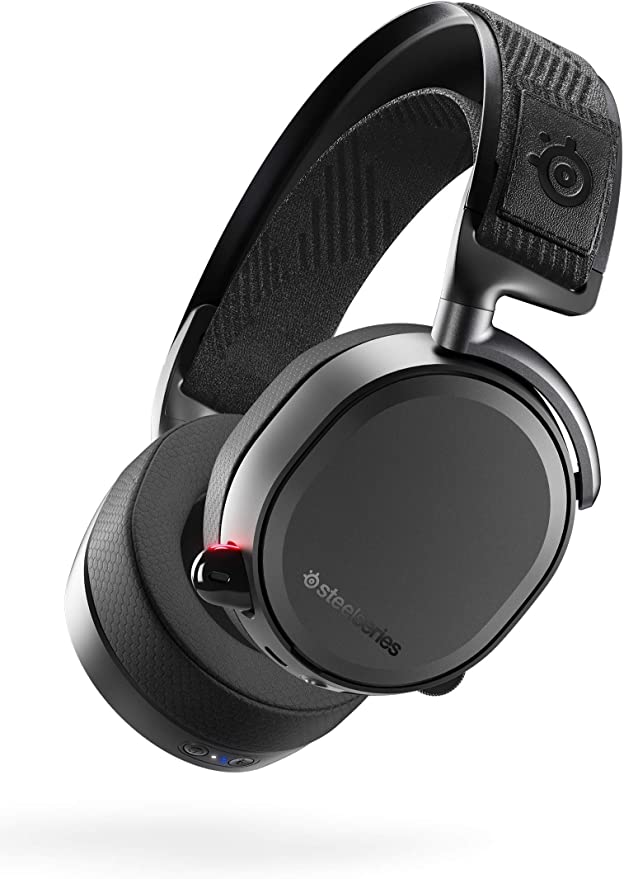 The Arctis Pro Wireless is SteelSeries top-of-the-range wireless headset. It has multiple connection options and is capable of hi-res audio through its included transmitter base station.

One of the best features of the Pro Wireless is its transmitter base station. The transmitter allows users to adjust the sound and equalizer settings without needing software. Its also capable of hi-res audio, also known as lossless audio. Many audio formats, like MP3 and AAC, compromise on sound quality to keep their file size low. Hi-res audio sounds better because its not compressed and has a higher sampling rate. While this feature might not make much of a difference to gaming, its worth it for music lovers in search of the best sound quality possible.

The built-in charger is another impressive feature of the transmitter base station. Unlike most gaming headsets, the Pro Wireless comes with two swappable batteries. Users can charge one on the transmitter while they play, and when the headset dies, they can swap the batteries around.

Theres no doubt about the quality and performance of the Arctis Pro Wireless, and it has certain functions that are unmatched by its rivals from other brands. Most competitors dont offer a separate base station, hi-res audio, and spare batteries with their headsets. That said, the extras increase its price drastically and put the Pro Wireless out of reach for many gamers. 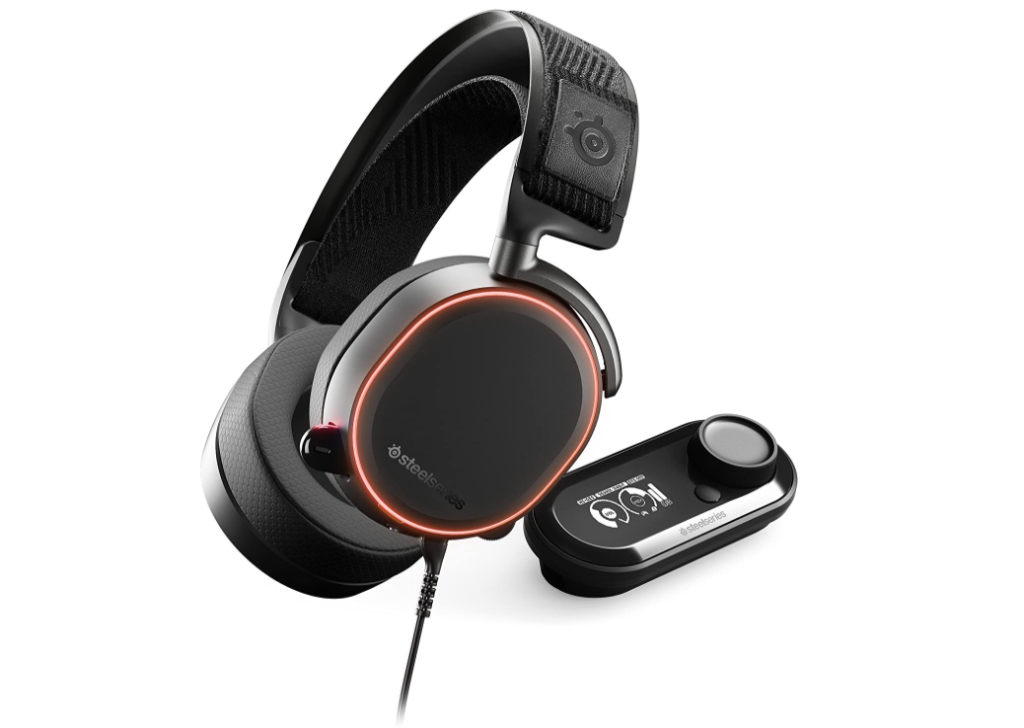 Users looking for hi-res audio without a wireless connection might consider the  SteelSeries Arctis Pro + GameDAC. This headset boasts the same hi-res audio capabilities as the Pro Wireless, but it comes with a small digital-to-analog converter (DAC) instead of a transmitter.

Most of the features on the Arctis Pro + GameDAC are controlled using the GameDAC. Apart from its audio capabilities, it allows users to adjust the audio settings, including the chat and game volumes, and switch the DTS surround sound on and off. Theres also an OLED screen making it easier for users to scroll through the customization menus. Despite its small size, the DAC also houses an optical port and a 3.5-millimeter jack for connecting the headset to a phone and another one with line-out capabilities.

When it comes to design, the Arctis Pro + GameDAC is unmistakable as a SteelSeries product. It has an aluminum headband with the companys usual ski goggle fastening system. This system features a velcro strap on the headband, allowing users to adjust its size.  Like most SteelSeries headsets, the Arctis Pro + GameDAC has oval-shaped ear cups with a retractable microphone and volume and mute buttons on the left side.

The Arctis Pro + GameDAC was the first headset to receive hi-res certification and has nearly unparalleled gaming headset sound quality. While it costs less than the Arctis Pro Wireless, its still more expensive than many high-end headsets, like the Logitech G Pro X and Razer Blackshark V2, because of the GameDAC. 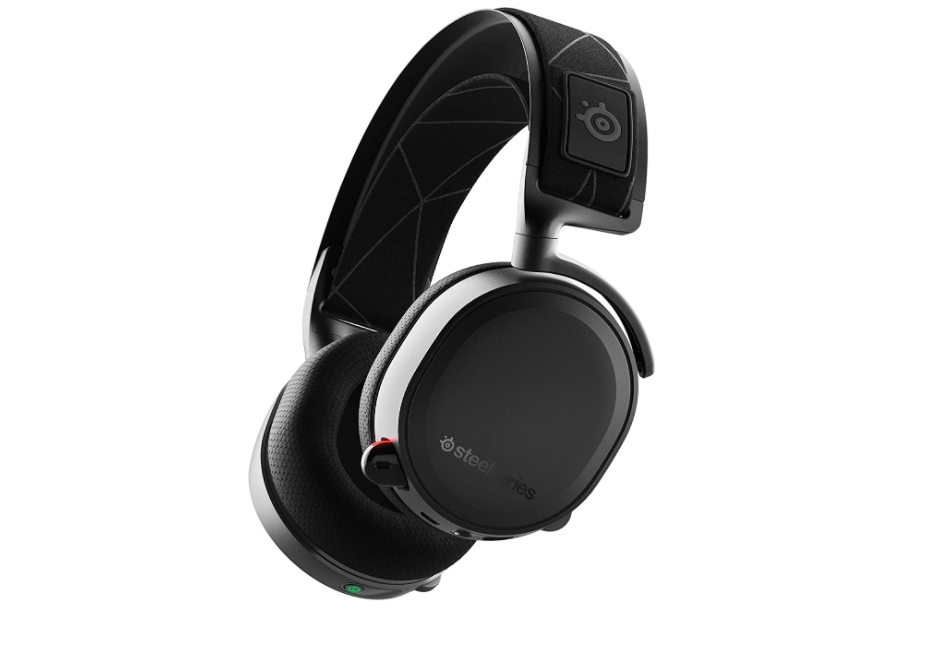 The SteelSeries Arctis 7 has similar build quality to the two previous options but costs far less. Its a wireless headset like the Pro Wireless, but theres no Bluetooth, and it works on a 2.4GHz connection only. While the lack of Bluetooth may be an issue for some users, it lowers the price and wont be an issue for gamers, who will mostly use the 2.4GHz connection. The Arctis 7 features a smaller transmitter with a 40-foot (12 meters) range and an expected battery life of around 24 hours.

Console players can use the Arctis 7 as a wired headset. There are two 3.5-millimeter jacks for line in and out functionality. Its possible to connect the Arctis 7 to consoles, phones, and other devices with the line in port. The line-out port allows PC speakers or surround sound systems to connect via the headset. When the headset is on, the sound will come through its drivers. If the headset is off, the sound gets routed to the eternal speakers automatically.

Its easy to see the family resemblance when comparing the Arctis 7 to other SteelSeries headsets. Like the previously-mentioned options, it has oval earpads and a velcro strap to adjust the headbands size. Theres also a retractable microphone along with the mute and volume controls on the left ear cup.

While the Arctis 7 doesnt offer hi-res sound it still has stereo and DTS 7.1 virtual surround sound. Considering the lower price tag, the Arctis 7 is a viable alternative to the Pro Wireless for users wanting performance without the premium price. 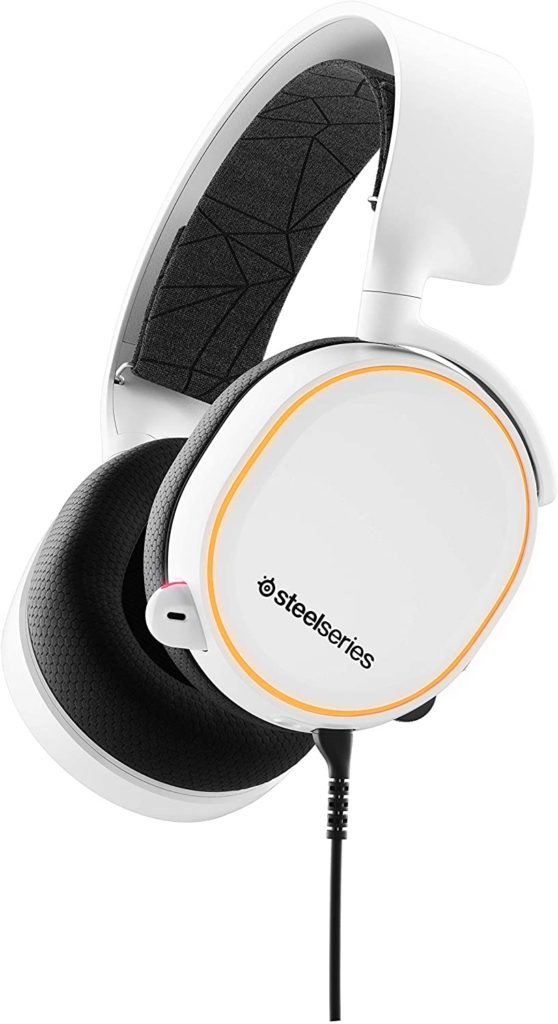 SteelSeries Arctis 5 is almost half the price of the Arctis 7, but it has fewer connectivity options. Theres no wireless capability, and it connects to PCs and PlayStation consoles via a USB sound card. Mobile users can connect using a 3.5-millimeter cable.

Like the Arctis 7, the Arctis 5 offers stereo and virtual 7.1 surround sound. By default, it has stereo sound, and users can switch to DTS virtual surround sound using the SteelSeries Engine 3 software.

As expected, the Arctis 5s design mimics the other headsets in the SteelSeries range. All the usual features make an appearance, including the adjustable strap, oval earpads, and retractable microphone. Its surprising to find RGB light strips on the more affordable Arctis 5 when its not available on the more expensive Arctis 7.

Of all the headsets on this list, the Arctis 5 has the best price-to-performance ratio. While it doesnt offer hi-res sound like two Arctis Pro options, it can compete with the Arctis 7 for sound and build quality. 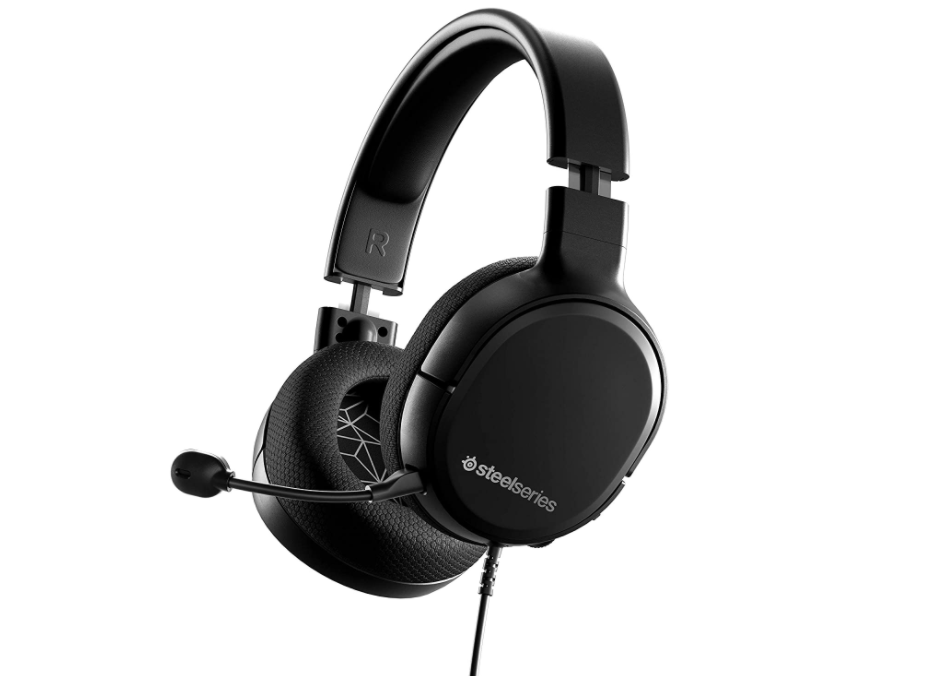 The Arctis 1 is the most affordable way to get a SteelSeries headset. Considering its cheaper than the other models in the range, users can expect many trade-offs in design and performance.

One of the biggest differences between the Arctis 1 and the other headsets listed here is its design. Its the only headset that deviates from the adjustable strap and has a more conventional slider. Connectivity options are limited to a 3.5-millimeter connection only, and theres no USB soundcard or wireless capability. Another big difference is that the Arctis 1 is the only headset in the SteelSeries range with a detachable microphone instead of a retractable one.

Even with all of the differences, there are some similarities between the Arctis 1 and other SteelSeries headsets. Despite the different headbands, the Arctis 1 has the same oval earpads as the other headsets listed here, and it has the customary on-ear controls for the volume and mute functions on the left ear cup.

While the Arctis 1 cant compete with the more expensive SteelSeries options, it comfortably beats other headsets in its price range. Having features like a detachable microphone and on-ear controls at such a low price makes the Arctis 1 a practical choice for users wanting a quality headset without spending much cash.

The post The 5 best SteelSeries headsets of 2021 appeared first on Dot Esports.

Latest comments
No comments yet
Why not be the first to comment?
Featured news
Hardware44 minutes ago

Everything we know about AMD’s refreshed Zen 3 Ryzen CPUs