Only the strongest tactician walked away with the title, prizes, and a chance to compete at Worlds 2021.

A total of 16 players earned their spots at the Regional Finals after a wave of qualifying tournaments. The Regional Finals took place over two days, between Sept. 4 and 5, when players battled it out for their share of $6,000 AUD in prizes, as well as a guaranteed spot to participate at Worlds later this year.

Tacticians showed off their skill and determination through six rounds each day, fighting for a chance to advance. The competition dropped to just eight players following the first day of matches. 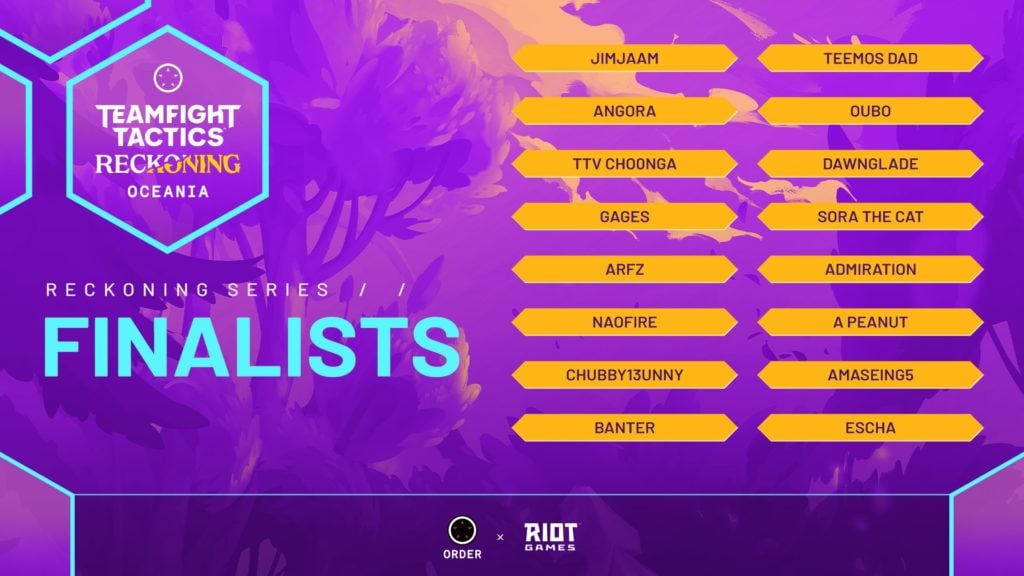 Day one of Regional Finals 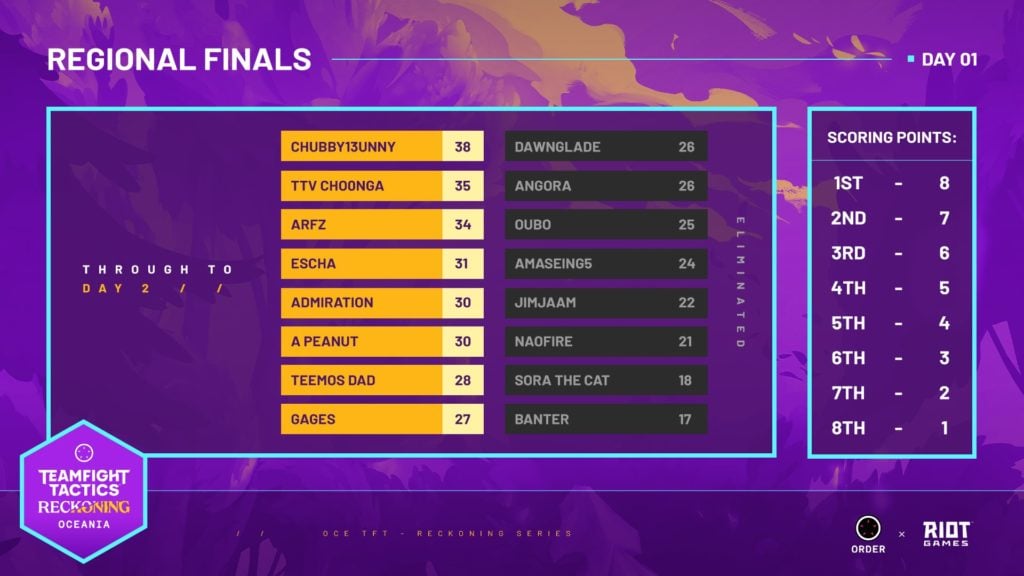 Here were the top eight TFT players advancing to the second day of competition at the Set 5.5 Reckoning OCE Regional Finals.

Chubby13unny and Cho0nga both started the first day with lobby victories, playing two of the more popular comps of the day in Redeemed Kayle and Spellweaver Vel’Koz. The two would go on to have a stellar day of performances, each with just one lobby placement outside of the top four.

The following games saw multiple players in each lobby clamoring for Recurve Bows and early Kayles since it turns out a one-star Kayle with a Guinsoo’s Rageblade can carry a team to a top-four placement quite easily by herself. Teemos Dad, Escha, and Admiration made up some ground on the early leaders with lobby wins. After four lobbies, Cho0nga was pulling far ahead of the competition with 27 points. Chubby13unny, Teemos Dad, and Escha followed in pursuit, each with 18 points.

Heading into the final round, some of the favorites to make it through to the next day of play were on the verge of being cut. Angora, Oubo, and Dawnglade were some of the better performers in the Reckoning Series qualifiers earlier this year but fell just short of making the cut in the finals following relatively middling results early on. Popular streamer and TFT personality Escha found a victory in the final game of the day, proving that he can mix it with the best of them and qualifying for the final day in fourth place overall. 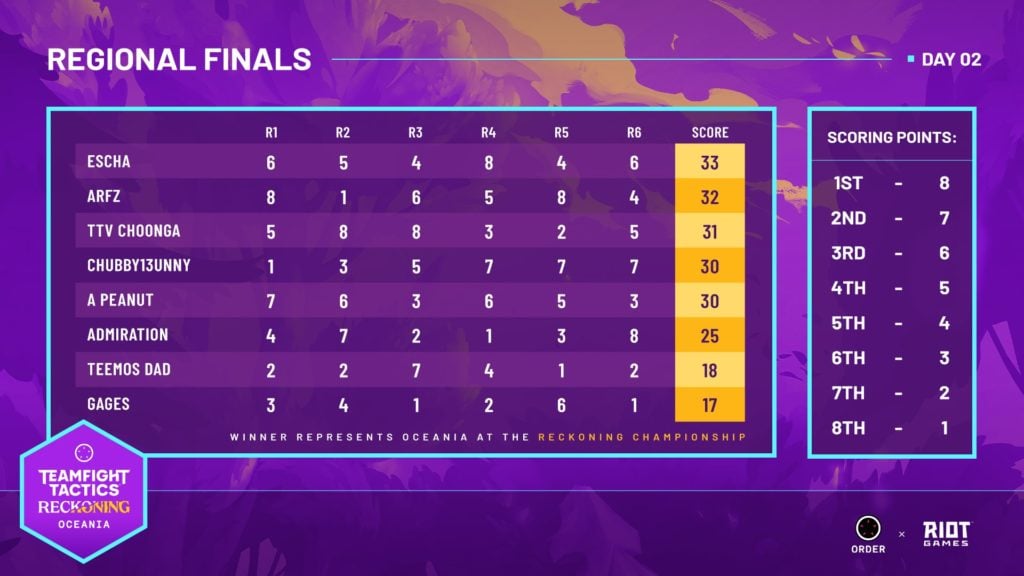 The second and final day of the Reckoning Series Regional Final saw the best eight players in the region competing over the course of six lobbies, with the tactician with the highest point total at the end of the day earning a spot to represent Oceania at Worlds.

Just as it was on day one, it was Cho0nga starting the day with three top-four finishesincluding two firsts in the first half of the dayputting him well ahead of the competition early. Well known for forcing Spellweavers in most lobbies recently, many other players were respecting that by not wanting to contest the composition, allowing him to play his comfort comp every game.

In the second half of the day, Cho0nga faltered in just one game, finishing seventh, and with that, Escha and Arfz were hot on their heels after winning a lobby each. It all came down to the final lobby, with Cho0nga, Arfz, Escha, and A Peanut all within two points of one another.

The only one of those four players that finished with a top-four placement in the final lobby was Escha, playing a shakey Lucian composition, only saved by his quick reactions and brilliant positioning. Often regarded as only being here for the memes, Escha proved he was here to play.

With both previous winners Oubo and Razza both failing to qualify for the final lobby of the Regional Finals, Oceania TFT will have its third new champion and international representative in as many seasons. Escha has won his share in $6,000 AUD in prizes, as well as a guaranteed spot to participate at Worlds later this year.

Latest comments
No comments yet
Why not be the first to comment?
Featured news
Oceania6 days ago