Four more will earn their places at the Mid-Set Invitational here.

A select handful of Oceanias best Teamfight Tactics players are battling it out in the Challenger Series event in the Gizmos and Gadgets Oceanic Series for a chance to represent their region at the TFT Gizmos and Gadgets World Championship later this year.

The Challenger Series will take place over two days of intense competition, on Jan. 15 and Jan. 16. The tournament features 16 tacticians that have been battling it out week by week on the ranked ladderincluding TSM’s Keane, a former LCS League of Legends pro turned TFT content creator who is once again competing at the highest level in a game.

The Gizmos and Gadgets Series begins Nov. 17 and will run all the way through Set Six and its mid-set expansion before culminating in the Regional Finals, set to take place between March 25 and 27.

The first day of play saw five games decide the top eight players that will advance to the all-important second day, where four players will earn their way into the Mid-Set Invitational. The point scoring system differs slightly on the first day in this series compared to day two.

The second day features a checkmate system, in which players need to reach a certain score before they can clinch victory. The higher reward for first place on the second day allows for these players to obtain this goal a little easier. The points are awarded on day one as follows:

And on day two as follows:

The first day of the Challenger Series was marked by numerous disappointing Mercenary cashouts, a resurgence of one and two-star re-roll compositions, and some fast level nine gameplay à la everybody’s favorite TFT streamer Soju.

The meta on the current patch is quite diverse, allowing players to flex their game knowledge in the mid-game by pivoting between many different compositions and letting the concept of strongest board carry them past the weaker opposition in the tournament.

Tamura77 and Cho0nga ended up being the two strongest players of the day, both of them applying this concept of the strongest board to their early game before settling into their late-game teams. The two first-placing tacticians dabbled in Fiora and Jhin carry compositions, which is another high-level trend at this tournament. Both Jhin and Yone/Fiora can utilize the same item set, so flexing between the two carries lets players find at least one or the other with some reliability.

Here are the eight players that made their way through day one of the TFT Challenger Series event: 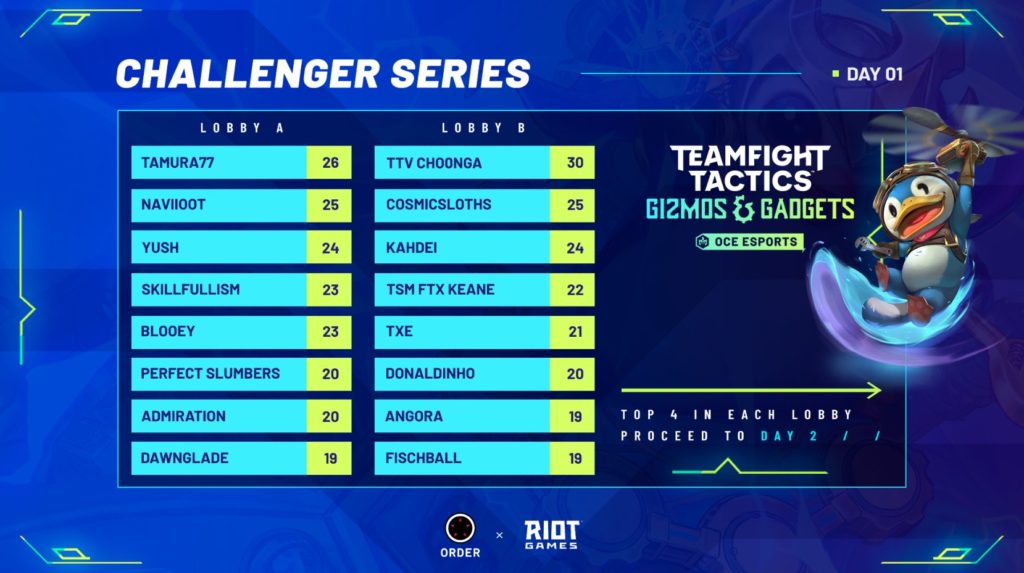 Play will resume tomorrow Jan. 16, at 1am CT (6 pm AEDT). We will update this article with the results.

Latest comments
No comments yet
Why not be the first to comment?
Featured news
Oceania12 days ago