Travel back in time with this five-mana Planeswalker.

The next stage in a multi-set story is coming with Brothers War, a time-traveling journey that brings back classic characters and a heavy Artifact theme.

Spoilers began today with several heavy hitters as previews continue throughout the weekend with several coming at Magic 30, the 30th-anniversary celebration that hosts the Magic World Championship.

A major figure in the narrative of Brothers War is Teferi, the Planeswalker that can manipulate time. Its rare to have a Standard without a Teferi around to frustrate players that hate playing against control and tempo archetypes. The new Teferi is a five-mana Blue Planeswalker that has a new way to gain loyalty counters. 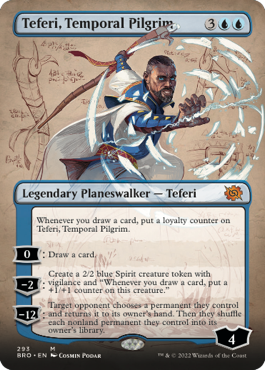 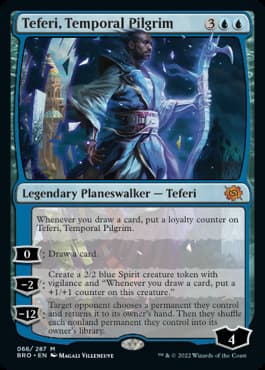 Magic continues to deliver unique planeswalkers that arent generically powerful, but fit interesting deckbuilding niches. Teferi, Temporal Pilgrim has a new way to gain loyalty counters by drawing cards. The 0 ability lets its controller draw a card. This isnt a great ability for five-mana, but in a mono-blue deck thats already ahead on board, itll be sufficient.

The -2 is solid. This allows Teferi to protect itself with a 2/2 Creature that scales throughout the game when you draw a card. This card can get out of hand quickly in a Blue deck, with its critical mass of card draw effects.

Getting to the ultimate looks like a combo finish. Sure, its possible to reach 12 loyalty by drawing cards, but more often than not activating the -2 multiple times is great. This is where a huge card draw spell comes in handy. With something like Cosmic Epiphany in Standard to ultimate Teferi the turn he comes in.

Brothers War releases digitally on Nov. 15 with a full tabletop release on Nov. 18.