This new League champion is becoming immensely popular in the pro meta.

The 2023 LCK season isn’t kicking off until next week, but League of Legends fans can get a first taste of the pro meta by watching show matches today and tomorrow, as part of the 2023 Season Kick Off event.

K’Sante had the highest priority in the showmatch’s first game. He was first-picked by Team Faker’s DuDu in the top lane. He was played alongside Sejuani in the jungle, picked by Liiv Sandbox’s Ruler.

This combo showed how deadly it can be during the game. Both tanks have high potential engage and many crowd-control tools to lock down their enemies.

Related: Heres the full breakdown of all format changes coming to the League Mid-Season Invitational in 2023 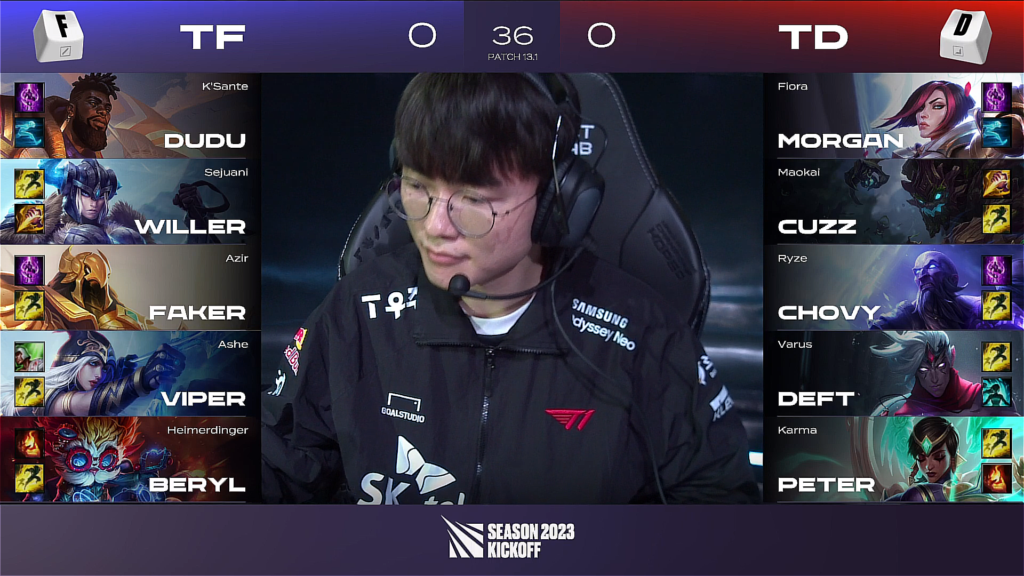 When Ruler’s Sejuani and DuDu’s K’Sante reunited in top lane ganks, Deft team’s players couldn’t do much against their strong combo. Their ultimates aside, K’Sante and Sejuani can use slows, stuns, and knock-ups.

If well coordinated, they can lock down enemies for a long time and can sustain a lot of damage due to their tanky build and resistance provided by their abilities.

“We’re not going to be seeing this too much just because how strong K’Sante is in general, but also this combo,” commentator Valdes said on the broadcast, expecting the champions to be banned in upcoming LCK matches.

This combo blended well with the rest of team Faker’s composition in the Season Kickoff showmatch, including Ashe, Heimerdinger, and Azir. They were supposed to be unstoppable in teamfights. When the moment came, however, players didn’t commit at the same time and lacked coordination.

Team Deft took advantage of Team Faker’s lack of coordination and singled out their players to kill them one by one, led by Chovy’s Ryze’s enormous damage output. It ultimately granted them the first point after a 40-minute match. Team Faker tied the score in the next game, but they ended up losing the series 2-1.

K’Sante shines on the ladder

Although K’Sante’s popularity was lacking when he was released last year, it kept growing during the preseason before receiving a nerf earlier this month. Now, he’s among the 10 most-popular top lane champions in the ladder’s highest ranks, according to League of Graphs. He’s especially popular on the Korean server, where he’s the fourth-most picked top laner with an average win rate of 50 percent.

Team Faker’s DuDu has been training a lot with K’Sante. He played nearly 100 games with him and boasts a 57 percent win rate, according to stats site op.gg.

The champion is likely to become one of the highest-priority picks for top laners in the 2023 LCK overall. Many other top players have been training him, such as World champion Kingen, who boasts a 62 percent win rate as his most-picked champion.

He was also the second most-picked top lane champion in the 2022 Demacia Cup in China behind Aatrox, who took place earlier this month, according to Oracle’s Elixir.

While it’s still unclear if K’Sante will shake up the meta in Western leagues, there’s no doubt he’ll make a splash in Eastern pro play.

Latest comments
No comments yet
Why not be the first to comment?
Featured news
League of Legends31 minutes ago