Tawnos, the Toymaker commands beasts and birds in The Brothers’ War

Build around powerful creatures and copy them.

Wizards of the Coast continues to provide Commander format cards within Standard set releases through Tawnos, the Toymaker, a Brothers’ War spoiler revealed today at Magic30.

Urza and Mishra are the two main characters in The Brothers’ War, slated to release on Nov. 18 globally. The set also focuses on minor characters, like Tawnos, a gifted artificer who apprenticed under Urza. Showcased during the Magic30 future of tabletop panel today was Tawnos, the Toymaker, a legendary Rare for tribal beast and/or bird creature decks. 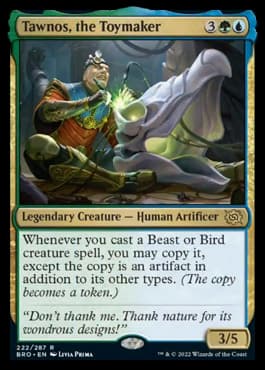 Designed for the Commander format, Tawnos, the Toymaker provides players with a commander that supports both beast and bird creature tribal. It also synergizes with Artifact themes, as the copy tokens are an Artifact in addition to its other types.

Digital formats like Historic and Explorer on MTG Arena can also use Tawnos, the Toymaker. His casting cost is a bit high for the formats, but it still may be worth crafting around. Beasts like Questing Beast and birds like Gilded Goose can provide some wild shenanigans when copied by Tawnos, the Toymaker.

Players can test out the worth of Tawnos, the Toymaker through the digital release of BRO on Nov. 14 or the global launch on Nov. 18.