Steve may be banned from all tournaments in Uruguay, Smash community reacts

The toxic character may be banned from an entire country.

Uruguay might be the first region to ban Steve from Super Smash Bros. Ultimate tournaments.

In a since-deleted tweet from the Smash Uruguay account on Aug. 2, it was revealed that Steve was banned from all events held in the entire country.

“We believe that he is a toxic character that damages the integrity of the game and gives an unfair advantage to competitors,” the account said. 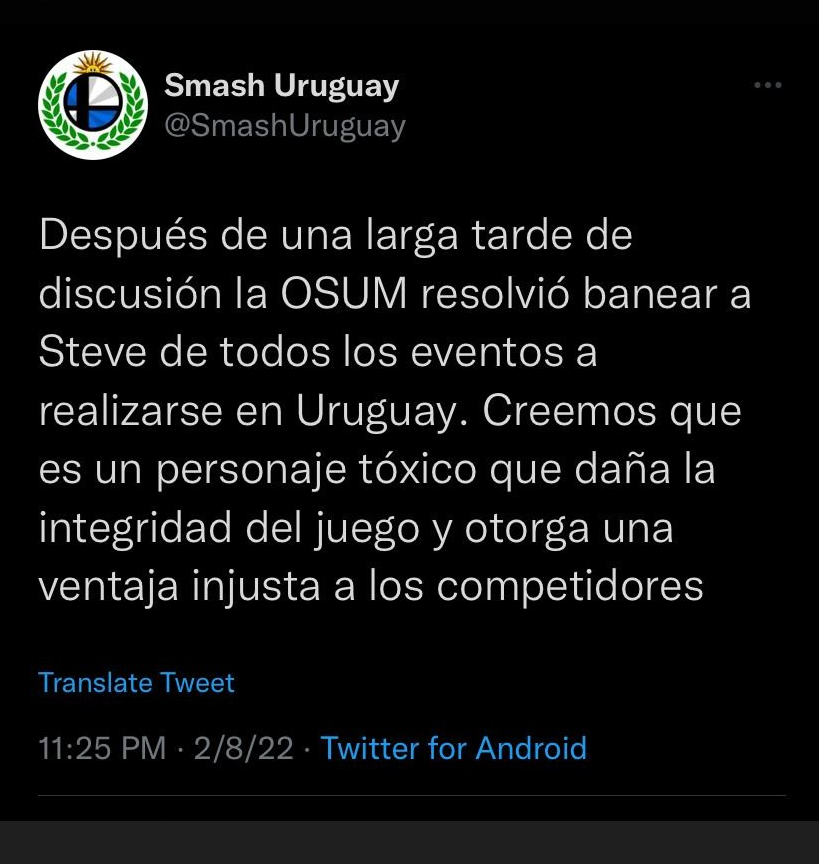 Is Steve banned from Uruguay?

Since Smash Uruguay deleted the tweet, it’s unclear if this will be the ruling for Smash tournaments in Uruguay going forward. But without any further explanation or updates from Smash Uruguay, it’s safe to say that this is the official ruling until stated otherwise.

One Smash figure from Uruguay, Fanca, claimed that the tweet was a joke despite being from an official account. The former director of the Mashito League and Mashito Cup said that “nobody in Uruguay really believes that Steve should be banned.” The tweet was met with skepticism from the Smash community as they await an official response to the deleted announcement.

The news of Steve being banned from an entire country was huge for the Smash community. Melee god Juan “Hungrybox” DeBiedma tweeted earlier today about the update, seeming entertained with the news. Many of his followers agreed that Steve deserved it.

First region to do this??? https://t.co/cJeMJb8o0l

Steve has a strange playstyle that’s unlike any other character in Ultimate’s giant roster. The Minecraft protagonist uses an abundance of tools to play the game in a very campy style, enraging opponents. He will use blocks to wall off enemies but if you happen to get close to him, Steve has a wild combo game that’s seen as much too effective. Steve’s ability to excel at both stage control and up-close combat has many calling him broken.

While it may seem dramatic to ban a character from an entire region of tournaments, the Smash community shrugged it off by saying that there are “no prominent players” in Uruguay anyway. Some joked that the country had about 25 residents total.

Latest comments
No comments yet
Why not be the first to comment?
Featured news
FGC2 hours ago

Daigo on the legacy of Evo: ‘It has nothing to do with the tournament or victory’