The first day of the 2022 Magic World Championship featured three rounds of Dominaria United (DMU) Draft. Each of the 32 players at MTG Worlds was split into three pods of eight. Each player in a Limited Draft format opens a pack, picks a card, and then passes the pack to the next player. Once all the cards are gone, the process is repeated two more times.

Pod one featured Siggy, with Zachary Kiihne passing to him. The first card in Siggy’s pack one was The Cruelty of Gix, a powerful Black Saga within the DMU Limited format. Drawing the Rare Enchantment pushed Sigrist into the color Black, according to Siggy, even though he had a feeling no good Black cards were likely going to get passed to him from Kiihne. 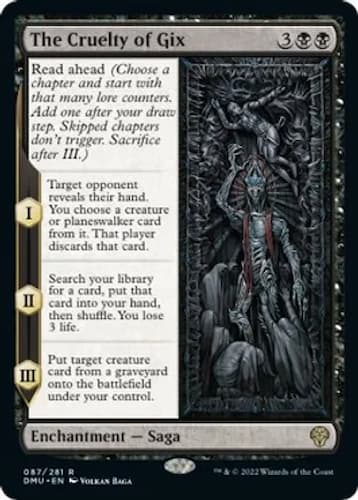 The pack passed to Siggy was missing its Rare, as each Draft booster pack has at least one Rare or Mythic Rare in it. The pack still had all the Uncommon rarity cards, but none of them were legendary, according to Siggy.

The secret of a guaranteed legendary within a DMU Draft booster pack has never been publicized by WotC. Most of the best legendary creatures in DMU are in the color Black, with Sheldred, the Apocalypse, and Sol’Kanar the Tainted rated as the two best, according to Siggy.

Using the knowledge that Kiihne was likely wanting to get into the color Black as well, Siggy opened himself up to other options during the first pack, choosing multiple Blue cards and some White. A second The Cruelty of Gix during pack two solidified Black as the main color for Siggy, resulting in him crafting a BW deck with a splash of Green.