They’ve finally overtaken the success of the 2019 Vancouver Titans.

Many Overwatch League teams have broken (or invented) records over the past five years, from fastest map completion times to consecutive stage championships. The San Francisco Shock has been a part of a fair number of these records, and the team can now add another accolade to the list.

With twenty wins, the 2022 San Francisco Shockwith a small contribution from the 2021 rosterhas broken the Overwatch League record for consecutive regular season victories.

The previous record was held by the 2019 Vancouver Titans roster, which clashed with the Shock numerous times over the course of that season. Though the Titans took the first stage title in 2019, they were later walloped by the Shock in the season’s grand finals. During the regular season, however, the Titans went on a massive win streak, which was broken by a surprise victory from the Los Angeles Valiant.

With a quick sweep of the New York Excelsior on Aug. 26, this year’s Shock roster carved their place in Overwatch League history. The team has racked up 17 wins over the course of 2022 and is currently undefeated. Because the record is measured regardless of season or roster, three of the record regular season wins are attributed to the 2021 Shock lineup.

Though this is a massive accomplishment for the Shock, the team has struggled to translate its regular season dominance into tournament wins. In this season’s first tournament, the Kickoff Clash, San Francisco was eliminated relatively early considering the performance of its players during the qualifiers. 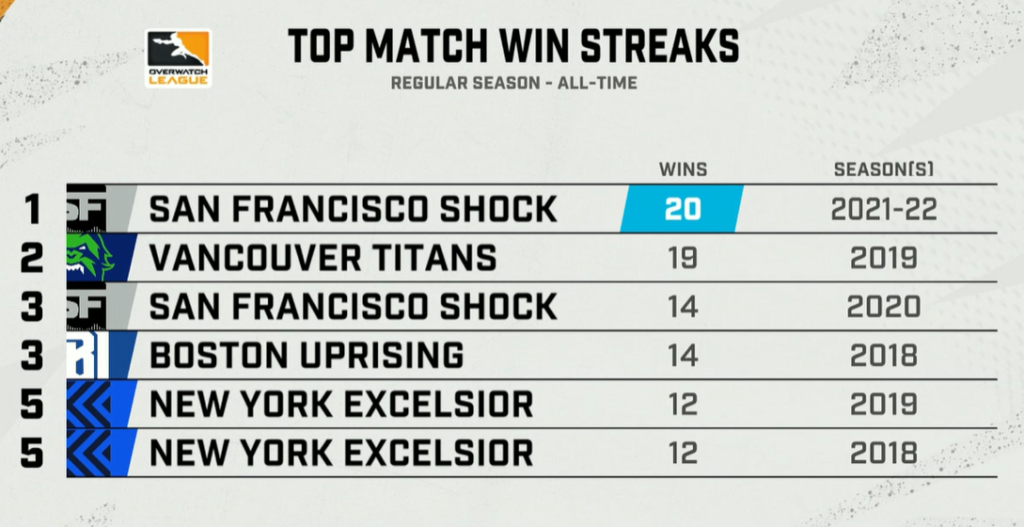 In the season’s first global tournament, the Midseason Madness, the Shock managed to make it to the grand finals. Thanks to clutch plays from the dominant Los Angeles Gladiators roster, however, San Francisco fell to its California rivals in a 4-2 game.

The Summer Showdown may be the Shock’s best chance at a stage victory, considering the Gladiators have gone 0-4 in the tournament qualifiers. San Francisco next plays the Dallas Fuel on Sept. 2 at 5pm CT.