Riot drops host of changes coming in League Patch 12.11, including buffs for 14 different champions from Ryze to Lee Sin

Here's the big follow-up to the game's recent durability update.

When Riot Games dropped the meta-shifting League of Legends durability update on live servers, many people began the mad scramble to find the strongest champions in the newest iteration of the gameand have begun finding them too. The developers, however, are planning to make adjustments in Patch 12.11 in order to balance out the sweeping changes applied last patch.

Riot’s associate game designer Tim “Truexy” Jiang has revealed a whole gamut of changes, with four different pages of buffs, nerfs, and adjustments to skim through. There are a few big names getting some buffs next patch, including Ryze and Lee Sin, who have both been floundering over the past few patches. 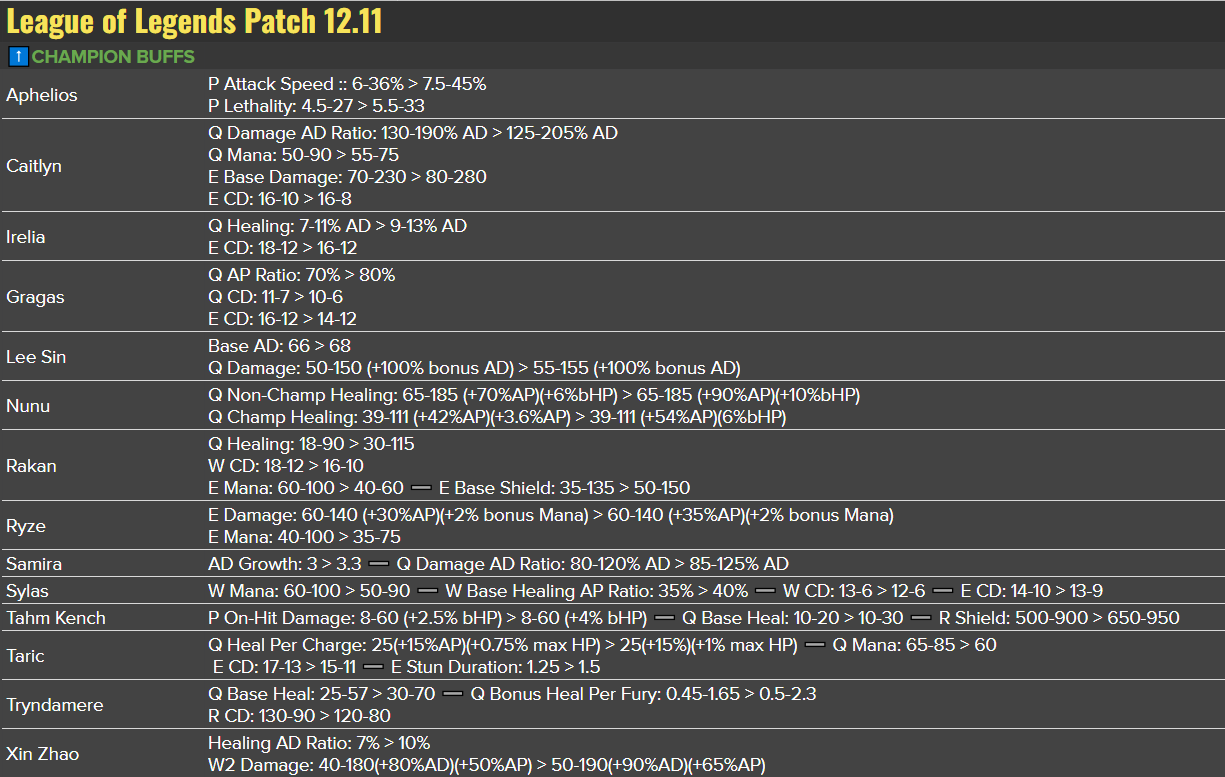 For example, the Rune Mage is getting a decent damage increase to his Spell Flux ability, along with a big drop to its mana cost. This should allow Ryze to spam the ability a lot more often while dishing out damage in late-game teamfights. Buffs for the champion have been a long time comingRyze has been struggling at the bottom of the barrel with a 40 percent win rate, which is the worst win rate of any champion in the game.

On the other hand, Lee Sin will be getting a base AD increase of two. His Q ability is also getting an increase of five at every level. Similar to Ryze, the Blind Monk has seen plenty of better days, since he’s dropped to an abysmal 44.8 percent win rate in solo queue.

Besides Ryze and Lee Sin, other powerful picks could rise in popularity after the patch goes live on Wednesday, June 8. The Sheriff of Piltover, Caitlyn, will be getting buffs to her Q’s AD ratio at all levels, along with a mana cost reduction. She’s also getting more damage for her 90 Caliber Net, with a late-game cooldown reduction.

Champions like Aphelios, Tahm Kench, and Tryndamere are getting some buffs that should help them stay in the meta in both pro and solo queue play. Overall, the list of planned changes is massive and will bring more League diversity moving forward into summer.