She's getting hit with the nerf hammer in the next patch.

Despite initially being slow off the mark, BelVeths win rate in League of Legends has risen to near the top of the ladder over the course of the last week, forcing the devs at Riot to nerf the games latest champion in time for the next patch.

After starting with a pitiful 37 percent win rate in solo queue, according to lead champion designer August Browning, BelVeth has now reached the 50 percent mark, all while climbing on a day-by-day basis. On top of that, her average MMR win rate has gone up to as high as 55 percent, which means shes particularly strong for a champion who has only been out for one week.

In Patch 12.12, which is scheduled to hit the live servers on Wednesday, June 22, the devs plan to ship a series of adjustments to the Void Queen. As well as lowering some of her base stats, theyre reducing the capability of her passive (Death in Lavender) in the late game, decreasing the damage of her E (Royal Maelstrom), and nerfing her ultimate (Endless Banquet).

The following changes should have a serious impact on the champion, pushing her down to a more reasonable win percentage in solo queue: 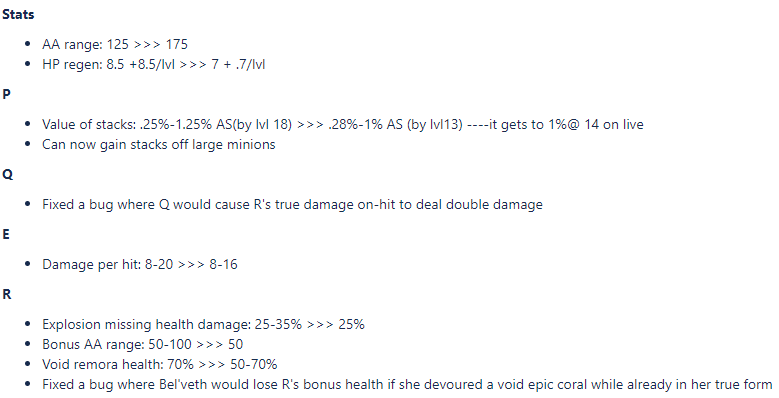 The full impact of these changes will be made clear in the weeks to come. The Void Queen is currently disabled in pro play and likely won’t be making an appearance for some time.