A statement made in the first week of split two.

It’s been an eventful week for Brandon “Respectful” Stones. After being dropped from Natus Vincere’s Halo Infinite roster in the wake of the team’s disappointing performance in Kansas City, Respectful and his new team, Online Warriors, faced off against NAVI in winners bracket round two of today’s HCS Pro Series tournament.

Not only did they take the series against NAVI with convincing objective mode wins for a 2-1 victory, but they also proceeded to hand Acend their first-ever loss in a European tournament in another 2-1 set.

For the first time, the powerhouse Acend roster will not be present in the winners bracket finals. Instead, Respectful and his teammatesMQSE, Phlux, and SoSnakeywill be the ones to face off against Quadrant. 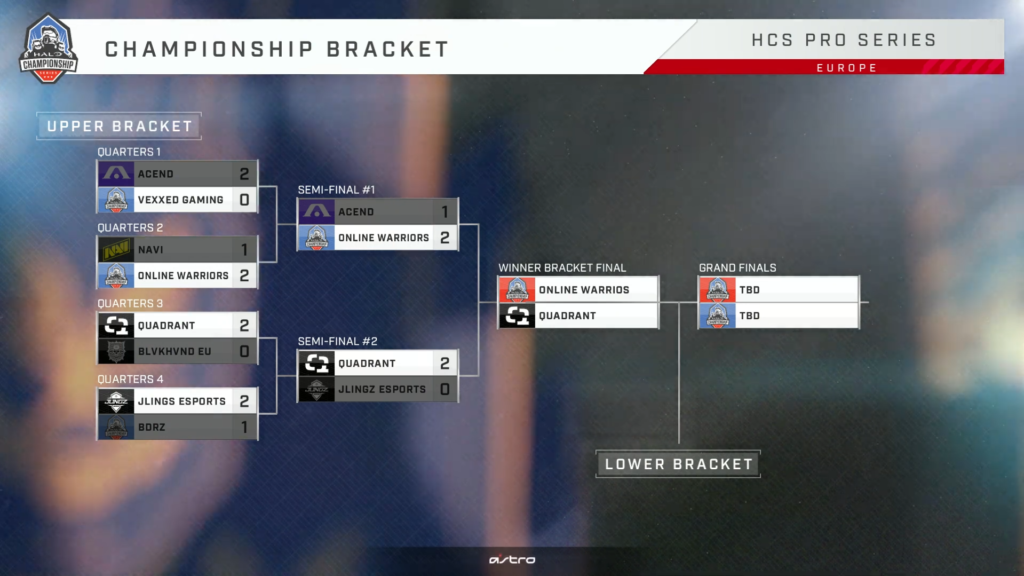 It’s clear from the stats of the NAVI vs. Online Warriors series that Respectful had a point to prove. His teammates milled around an average 1.0 K/D ratio, but Respectful concluded the set with a mighty 1.6 K/D and the most kills in the lobby with 72. Despite the fact that blows were traded back and forth in the slaying department, statistics alone don’t convey how convincingly Online Warriors took the win.

NAVI narrowly managed to take a 50-49 Slayer win on Aquarius to keep themselves alive in the best of three series, but in the King of the Hill and Oddball games where objective efficiency and team synergy were crucial, Online Warriors looked in control.

Online Warriors’ defeat of NAVI would have been enough of a fairytale storyline on its own, but their next matchup against Acend proved to be even more monumental, considering Acend had never lost on home turf. Entering the match, Acend sported a flawless record in European tournaments that was only slightly tarnished by less-than-stellar performances against North American teams.

Whether it was momentum from their revenge on NAVI or errors from the side of Acend, Online Warriors put an end to that streak. Game one on Live Fire Strongholds looked like business as usual for Acend, sweeping Online Warriors in a 250-45 victory. Many already had the series chalked up, but a nail-biting Slayer on Catalyst for game two came down to the wire before Online Warriors sneaked away with a 50-48 win. Respectful was once again the standout player on his team, putting up a 16-12 performance to help push his team over the finish line and keep their winner’s bracket hopes alive.

Even the Slayer wasn’t close to how narrow the margin would be in game three. Both teams took a round off of each other in Oddball on Recharge, and the deciding round would come down to time with only a few points separating them.

We can't quite believe what we've just seen…

Online Warriors are the first team to ever win a match vs @AcendClub online in EU! And they do it in STYLE!

The countdown stops whenever the Oddball is held by a team, but back and forth slays and multiple Oddball resets ended up leaving the timer with only 40 seconds left and Online Warriors enjoying a 10-point lead. Undeterred, a successful rotation by Acend allowed them to squeak out a narrow two-point lead with 20 seconds left followed by an Oddball reset. The team fight over the respawning Oddball was chaotic, but it would be each member of Online Warriors sacrificing themselves for a second or two of scrappy Oddball time in the face of a dozen grenades that would hand them a 92-91 lead as the timer expired and the game concluded in their favor.

What could have been a week of heartbreak turned into a week of redemption for Respectful, proving that whatever reason lay behind NAVI’s choice to replace him on the roster was not indicative of his talent. NAVI will be back to the drawing board following a lackluster introduction for their new lineup, unable to defeat JLINGZ esports in the lower bracket and bowing out of week one before being able to clinch top four.

Latest comments
No comments yet
Why not be the first to comment?
Featured news
Halo2 days ago