Ranked is getting a little more forgiving. But are the changes enough?

After weeks of a divided player base over the sweeping changes made to Apex Legends ranked mode in season 13, Respawn is making more tweaks to the ranked mode. Coming to the game alongside the Awakening collection event, these changes seem to be geared toward making ranked feel a little less punishing for the vast majority of players.

Another interesting change coming to the ranked system is the decision to decrease the severity of the ranked split reset. At the beginning and in the middle of each season, the ranked map traditionally changes, at which time players are automatically sent down several ranks, the goal in mind being to start the season afresh and give players something to climb for.

This reset has been six divisions for a long time, meaning that if you ended a ranked split in Platinum IV, you would begin the next split in Silver II. The new reset total is four divisions. Apparently, with climbing made much more difficult by the ranked system, Respawn thought it was best to soften the blow of just how much players would have to climb.

Tweaks are also coming to how ranked handles diminishing returns for kill points, as well as kill tier differences. At the beginning of season 13, the number of ranked points that kill points would translate to fell off rapidly as players collected more and more kills. The system placed a far greater emphasis on placing high in matches.

Respawn is also dialing this back, now making high-kill games more valuable to players once again, while still trying to retain the importance of high placement. According to Respawn, winning teams with high kill totals will now gain 40 to 60 more RP than the previous version of ranked. Players will also get significantly more points for eliminating players of higher tiers than they are, with values increasing 50 percent per tier difference. 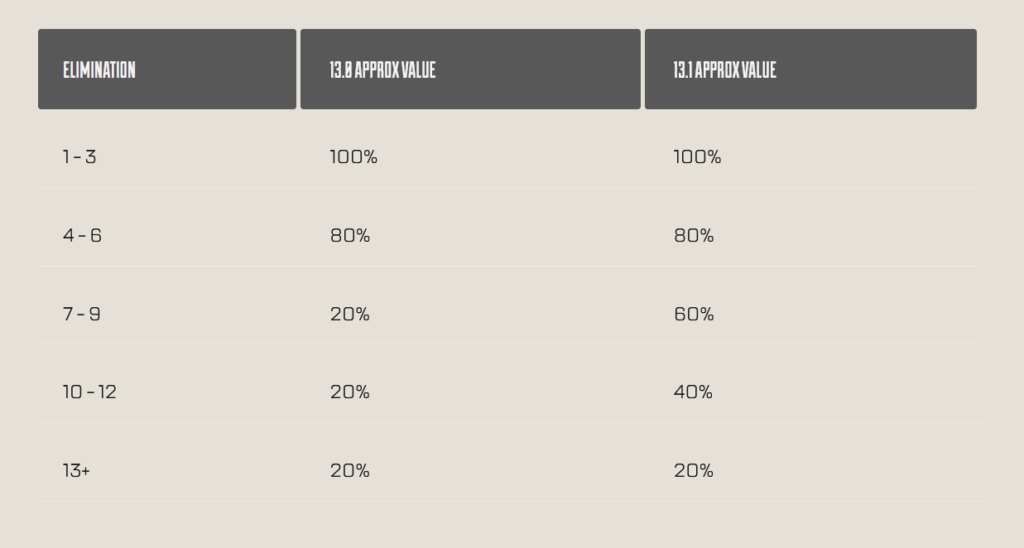 These changes are good for the vast majority of the player base. While the new ranked mode sought to define what should be the playing philosophy of a battle royale, to survive until the end, the means used to reach that goal were particularly harsh. Instead of giving a significant portion of the player base a more interesting and difficult grind, it simply caused many players to lose interest in the mode. The tweaks will potentially lure players back in, especially those solo-queue players who have felt the sting of random teammates hot-dropping and dying a couple of games in a row, which can easily wipe out a players progress up the ranks.

The changes do not seem to really address how unrewarding the mode can feel for players at the top of the ranked ladder, however. With so many Predator players still being matched up against Golds and Platinums, kill point tier differences make grinding and staying in Predator feel like a chore, as lobbies for Predators are filled with players that will only reward them a fraction of the ranked points that players of their own rank would give them.

The hope, then, must be that the tweaks to the ranked system will help more fully flesh out the Masters and Diamond ranks once again, giving the mode a more balanced player population. If it works, ranked might finally find its groove after several seasons of complaints.