The long-awaited romance is finally here.

It turns out, large parts of the VALORANT community were correct all along.

The official VALORANT Twitter account has been following the journey of Killjoy, Phoenix, Yoru, Neon and Raze from Killjoys perspective. Various images of the groups trip to Salvador can be found where they can be seen talking with locals, partying it up, and more. There was little context as to what the purpose of these images could be until the VALORANT account posted yet another image today. Unlike the other posts, this one had no caption and just saw Raze and Killjoy kissing in the middle of a party where they had been seen at in previous posts.

There has been much debate over the nature of Killjoy and Razes relationship since early 2021 when Riot Games released a VALORANT dating simulator for April Fools. In the game, Cypher talks about seeing Killjoy and Raze picnicking on the beach which led many fans to speculate whether or not these two mechanical geniuses were more than just friends. 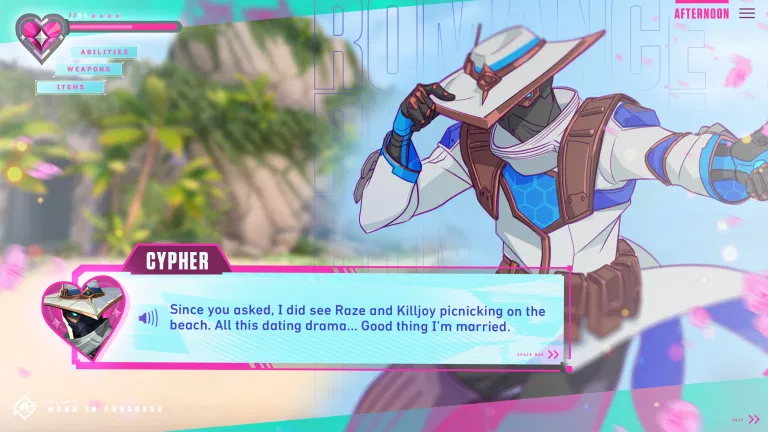 Raze and Killjoy have also have special voicelines between the two of them that many players read as going beyond playfulness and into full-on flirting. With today’s big reveal, it’s safe to say that Riot has been plotting this moment for a while.

The image is not only the first confirmed agent-on-agent romance in the series, but Raze and Killjoy are also the first confirmed LGBTQ+ agents in VALORANT as well. Riot are no strangers to showing that love in love in their titles, as multiple League of Legends champions have also been confirmed to be in LGBTQ+ relationships in the past.

Whether these promotional images were a fantastic buildup to a highly anticipated romance or a teaser for something more is still uncertain, but as VALORANT continues to grow, so do the storylines and lore of these characters.