Phyrexia: All Will Be One Commander precon face cards bring fresh look to known MTG archetypes

Phyrexia: All Will Be One will release with two preconstructed Commander decks depicting different sides of the current multiversal conflict involving the Phyrexian threat.

ONE releases on Feb. 10. Corrupting Influence is the precon centered around the Phyrexian side of the conflict. The other precon, Rebellion Rising, shines a light on the Mirran side fighting against the invading force. Wizards of the Coast revealed the face cards for each precon during the first day of spoiler season. Each lead Commander provides a new take on an established archetype and has built-in card advantage engines.

The full decklists for the ONE Commander precons will be revealed on Wednesday, Jan. 18 by Command Zone and MTG Muddstah.

Here are the two face cards for each ONE Commander precon deck. 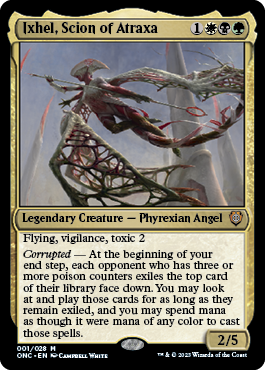 This is a solid body with a nice set of stats. A 2/5 Flying body with Vigilance will allow it to both block and attack effectively. It dodges a lot of damage-based removal and should help keep you safe from a full-out aerial assault.

Ixhel has Toxic 2, which means when a player is dealt combat damage by this creature they will gain two poison counters. Using poison to close out games was a fringe archetype brought back in Kaldheim through Fynn, the Fangbearer. However, the mechanic is now back in full force in ONE.

The end-step ability is solid. It is a nice way to get card advantage and reward you for spreading poison counters around. This isnt an all-in poison counter list like every other deck in the format. An Ixhel list will look to use poison counters to enable a value engine through Ixhel, while also having the potential to use the powerful one-shot combos that are established in Commander. 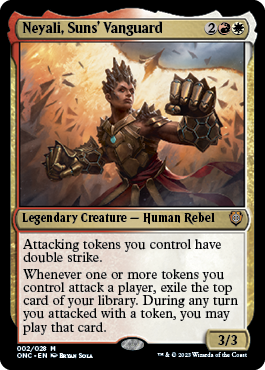 Nayali is Red and White so you can safely assume this list is all about winning the game through the attack step. The twist is Nyali synergizes with creature tokens attacking. This four-mana 3/3 is fragile in Commander, but its ability encourages the player to play it after setting up the board for a few turns.

Giving attacking tokens Double Strike is a powerful effect. RW lists are able to generate tokens quickly and provide wide buffs that can easily make a legion of Double Strike tokens into a game-winning threat. The second ability is a nice bit of card advantage. Its a way to accumulate more resources and either have combat tricks ready to go or supply some action for your post-combat Main Phase.

This is a tough Commander to build around in a format like Commander with three other players to both kill and dodge removal spells from.

The key to good Nayali lists is to use Double Strike to suddenly eliminate a player in an attack step, then point that cannon at the next and the next until the game ends.