Following the initial partnership with Nintendo of America to create the first official Super Smash Bros. circuit for Ultimate and Melee in November, we now have details for the newly revealed Panda Cup.

Beginning in June with CEO 2022, the Panda Cup will include many of the biggest Super Smash Bros. events throughout the remainder of the year, along with a set of online qualifiers, that will lead up to the Panda Cup Finale in December, which will feature a more than $100,000 prize pool.

Between June and November, 32 players will qualify from various events, online competitions, and the last chance qualifier across both Ultimate and Melee to make up the Panda Cup Finale roster from Dec. 16 to 18. An expert community panel will also vote on a handful of invites prior to that last chance qualifier on Dec. 15, with criteria based on placements, win rates, and more. Both the LCQ and Panda Cup Finale will be held in Los Angeles.

Here is the full list of events and dates included on the Panda Cups circuit: 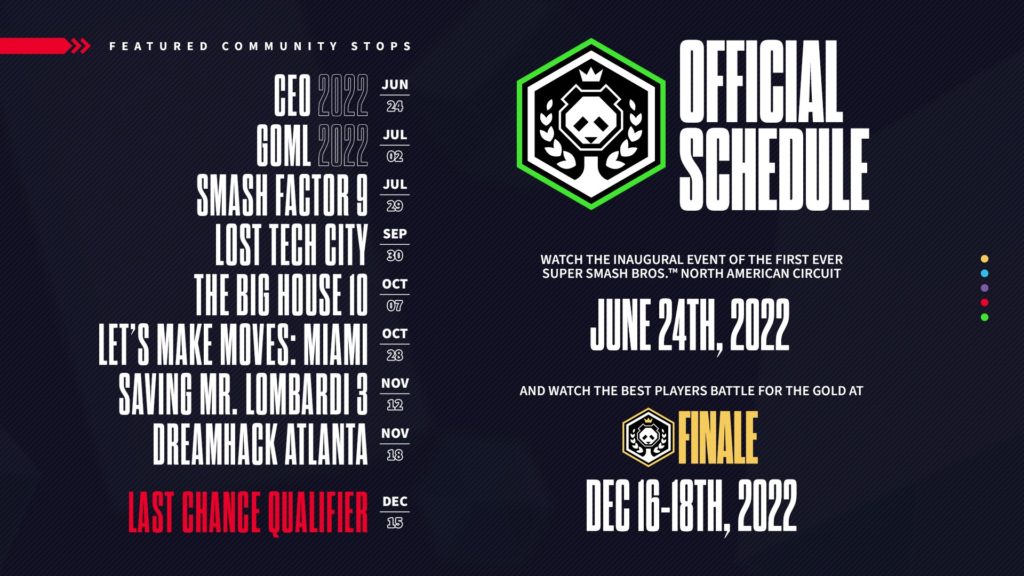 This all starts with CEO from June 24 to 26, where three players from both games will qualify directly.

Panda does note along with this announcement that, while the circuit is officially licensed, Nintendo is not a sponsor, co-sponsor, or administrator of Panda Cup. Though, as NoA senior director of product marketing Bill Trinen previously said, it is a direct effort from the company to “create a more consistent, fun, and welcoming competitive environment” for Smash players.

Dates for online qualifiers, along with more information about those events and the community panel, will be shared closer to when they become relevant in July and November, respectively. You can also view a full ruleset for both competitive circuits and additional details on the official Panda Cup website.