If I see one Junker Queen after this, I swear to god.

Overwatch 2 has an evergrowing list of heroes for competitive gamers to test out. There are currently 11 tanks to take control of in OW2 and every player has their favorite. Players might watch the competitive scene and follow in the pros footsteps, but sometimes you just want to play a hero you find the most fun.

From the list of tanks, there is surely a meta-topping behemoth that can plow through a defensive line and absorb more bullets than the rest, and believe it or not, the Overwatch 2 community has diplomatically come to some sort of agreement.

Overwatch 2 players were asked to list the three best and worst tanks, and explain their reasoning, and like bees to honey, they flocked to share their knowledge.

From all Tank heroes, please pick the top 3 best heroes and the top 3 worst heroes and write down the reason. (Based on the current date.) from overwatch2

Orisa and ‘Hog lead the pack, Reinhardt “the worst”

There were a lot of similarities between the answers.

The best category usually fielded tanks like Roadhog and Orisa, and almost every single worsts list had a Reinhardt sitting at the bottom of the pecking order. Rein cant keep up with the rest of the cast, especially with his Firestrike being kinda meh (sic) and his pin being the worst movement ability in the game by a long shot, one OW2 player said. 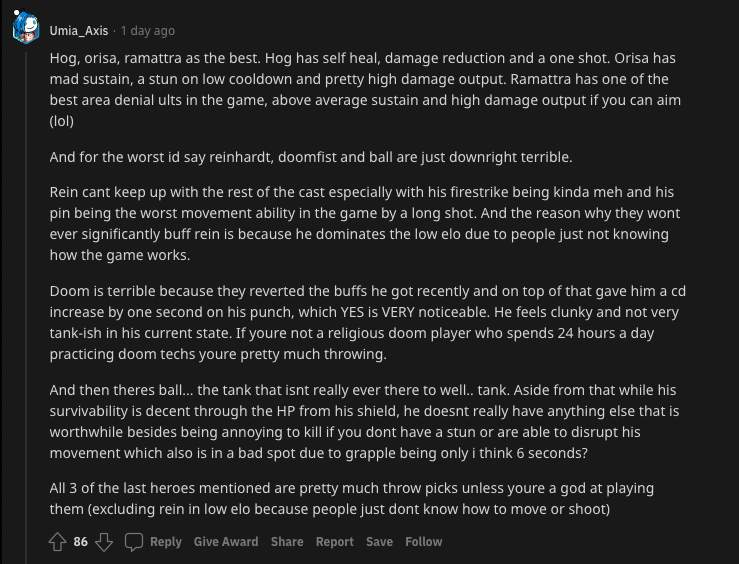 Some players claim Doomfist is clunky and not very tank-ish in his current state, but others beg to differ. Doomfist was one of the tanks that somehow made it into both best and worst lists. The recently buffed and then nerfed hero seems to have left an impression on players in the OW2 community. The players who think Doom is genuinely good seem to think players dont know how to use him or the other tanks just outshine him.

The newest tank on the market seems to be landing some left hooks as players typically enjoy playing Ramattra. Ramattra has great counters to a lot of heros (sic) and ult is pretty good too, one player pointed out.

This could also be the fact Ramattra is a completely new tank, and when characters are just thrust into the meta, they can be hard to play against. Maybe some more time in the server might expose a few of Ramattras flaws. 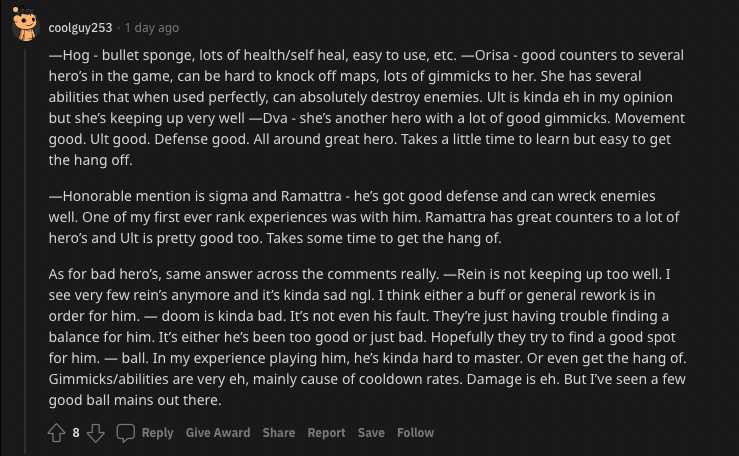 So from now on Roadhog, Orisa, Sigma, and Ramattra are the only tanks you should allow your teammates to main. If you see a Reinhardt, Wrecking Ball, and Junker Queen you may as well leave your match.

There you have it: your hero picks are set until the next Overwatch 2 patch absolutely ruins the tanks you enjoy (cross your figures that doesn’t happen). You may as well learn them all, especially if Reinhardt makes a glorious comeback one day.

Latest comments
No comments yet
Why not be the first to comment?
Featured news
Overwatch17 hours ago