Known for his memes and his for-fun streams, Escha has proven the doubters wrong after a relatively comfortable second day’s play at the TFT World Championship for Set 5.5.

After a shaky start to the day finishing last in the very first lobby, the solo Oceanic representative went on to finish top-four in each game that followed, earning him a spot in the top eight, guaranteeing himself at least $12,000 USD and a shot at winning the biggest title this game has to offer. 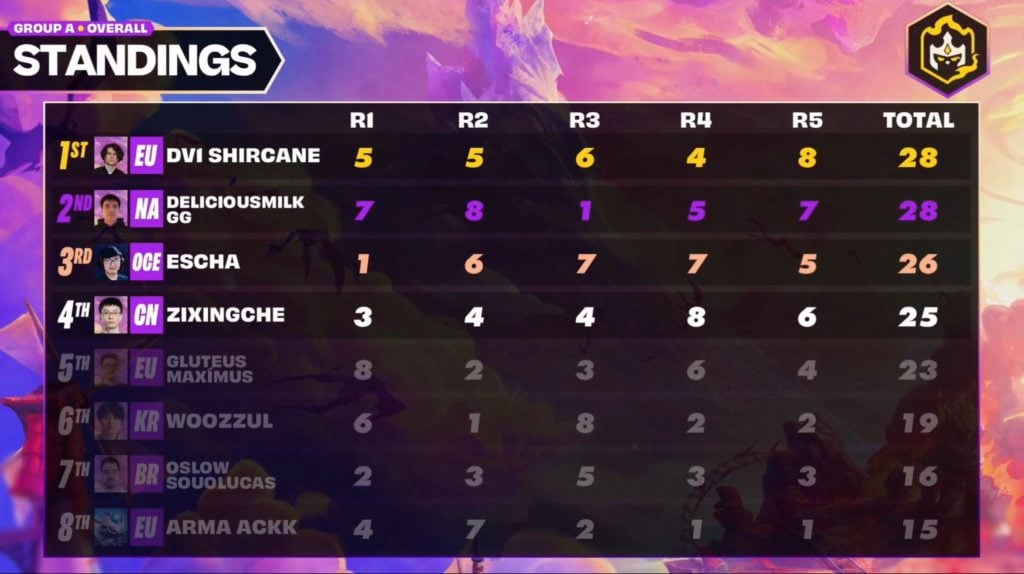 The spirit of Mortdog was definitely on Escha’s side today, aiding in his remarkable turn of form in the second game. It’s easy enough to say “just hit”, but it was how Escha molded his early-game boards after finding those key units that helped him create early momentum in most of his games.

For instance, in the day’s fourth and fifth lobbies, Escha’s early loot orbs contained AP components, but he was aware that Gluteus Maximus had been forcing Spellweavers in every game. Escha thought outside of the box and found a way to transition into an unusual AP Lucian build and an Invoker Karma comp, which helped him remain uncontested.

Escha will advance to the final day of play at this set’s Worlds, where eight of the strongest players from around the worldincluding four players from today’s Group A and four players from tomorrow’s Group Bwill compete for their share of the prize pool. Joining Escha in qualifying out of Group A was Europe’s Shircane, North America’s DeliciousMilkGG and China’s Zixingche.

The TFT Worlds action continues tomorrow at 4am CT. The second group of finals hopefuls will battle it out to see who will join Escha in the third and final lobby of the tournament, where a Set 5.5 champion will be crowned.

Latest comments
No comments yet
Why not be the first to comment?
Featured news
Oceania10 days ago