More latency on the chopping block.

Many gamers understand the benefits of more frames per second (FPS). Anything cruising above 100 FPS is solid, hovering around 60 is playable, while 30 and under is far from ideal. It’s even more crucial in esports — the player with higher FPS simply has a killer advantage against those with lower FPS.

Nvidia has collaborated with The Meta, creator of the aim training game KovaaK 2.0, to demonstrate a system latency challenge through the participation of two aim challenges: Latency Frenzy and Latency Flicking. Each of these challenges showcases system latency variation and its direct impact on aim in-game. All of this is in preparation for Nvidia Reflex.

We’ll be tracking our results through Latency Frenzy and Latency Flicking the two first-person shooter tests within Kovaak’s aim trainer (via Nvidia) among a series of three trials. Within each trial, there’s three separate phases.

Before we begin, it’s worth mentioning we trialled this with a Nvidia GeForce RTX 2070 GPU. According to Nvidia, to accurately achieve desired results, you need to have a GPU that supports Nvidia Reflex (GTX 900-series or newer).

The goal with this trial is simple: Shoot as many red circles as possible within a minute. As mentioned above, there are three runs for the three different latencies, and you have a short window between each to adjust to the randomized system latency change. 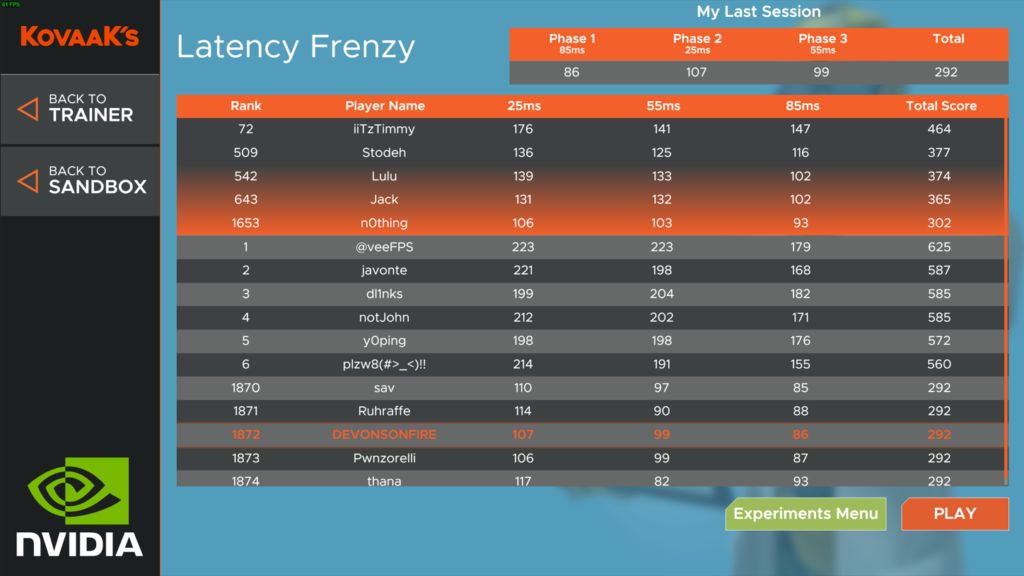 It’s also worth mentioning that, right away, I had to stop the trial and exit out to navigate to the in-game settings. My aim sensitivity was completely off, and it took time to get things feeling right. Kovaak allows users to select between a handful of popular FPS titles within their settings to best mirror ideal in-game sensitivity. I’m most familiar with Counter-Strike: Global Offensive, so I went ahead with that choice. There’s also titles like Valorant and Overwatch to pick from as well.

I’ll have to admit, there was a bunch of trial and error with picking the proper sensitivity because each time you adjusted the sensitivity scale number, you have to jump into a new trial and see how it works, which is time-consuming. It’s important that this feels as close to home as possible if you want your results to be reliable.

The second trial, Latency Flicking, was much more challenging. You’re tasked with shooting a central blue ball before flicking to a red ball that spawns somewhere else on the screen. The catch is that the red ball only appears for just over half a second before it vanishes, so you have to flick and shoot it as fast as possible. The red ball is also tiny much smaller than the targets from Latency Frenzy so missing the ball completely is inevitable.

After running the test three times, I found a substantial difference between 25ms and 85ms. At 25ms, I was managing. At 85ms, I found it very difficult to hit the red ball before it disappeared which was beyond frustrating. 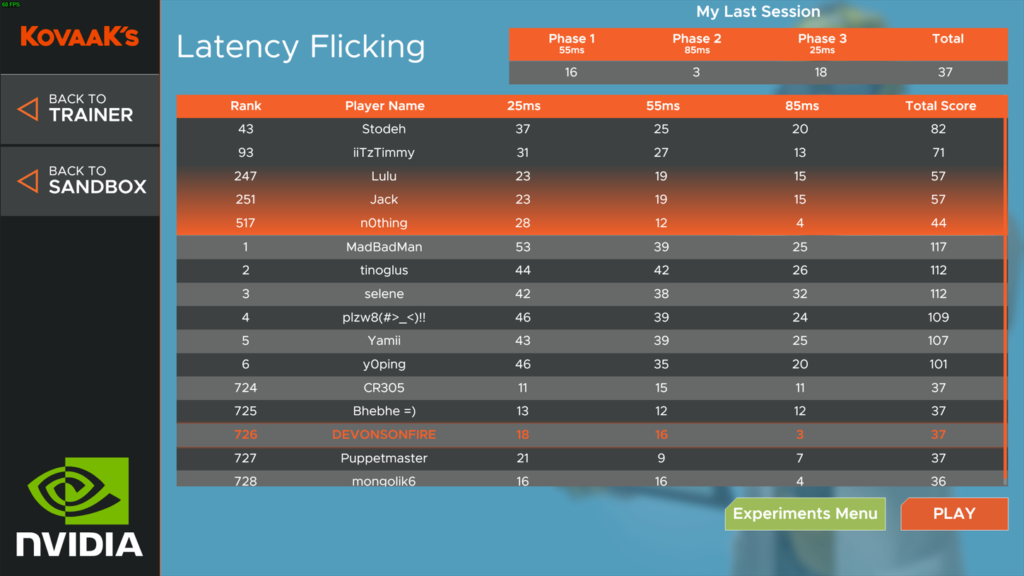 What’s interesting here is that, between 55ms and 25ms, my initial score wasn’t too different. It wasn’t until I was tasked with 85ms that my results nosedived. After giving Latency Flicking a few more attempts, I noticed that 85ms remained low. It’s like there was a point of no return regarding some system input lag sweet spot; once you passed a threshold, getting the job done felt out of reach. All in all, the sluggish feeling from Latency Frenzy was quite evident with this challenge.

It’s not until you partake in an experiment like this that you immediately see the impact of high and low system latency. Going from 25ms to 55ms was enough to throw off my game. However, when I jumped to 85ms, it felt like I was dragging my mouse through a layer of mud. Nvidia claims that it’s seeing massive improvements in aiming with lower latency, and after giving these challenges a go, I see what they mean.

The types of games that you play likely have an impact on how much variation you feel in an experiment like this. If you regularly play first-person shooters, you’re going to notice things immediately. In contrast, the casual gamer who hopes onto their favorite MMORPG from time to time might not have as strong of a response to an experiment like this.

Regardless of where it comes from, every little bit of latency adds up. Nvidia Reflex’s aim is focused on reducing system latency, designed to eliminate queues and bottlenecks between the CPU and GPU, translating in providing gamers with an up-to-date location of their opponents in-game.

As most gamers know, every little bit of advantage adds up. A few shaved-off milliseconds won’t exactly lead you to become a top-tier pro overnight, but overall, better in-game performance measures like reduced system input lag will likely result in some form of improvement, especially in the long run. The question is, how big or small is that improvement going to look like? It’s going to vary from gamer to gamer. I’d recommend looking into Nvidia Reflex if you’re interested in enhancing your gaming experience, even if it’s just the slightest bit. Checking in with Nvidia and KovaaK is a great place to start.

The post Nvidia and KovaaK have created a playable FPS test to showcase system lag appeared first on Dot Esports.