Dota 2 has been bleeding active players in the last five years. As Valve don’t advertise the game apart from its Netflix show, Dragons Blood, and The International, Dota 2 struggles to draw in new players.

While the active player count may have been on the decline, most veterans are often a click away from reinstalling the game, and Valve recently made reservations for everyones weekend with the Swag Bag. Giving away a free battle pass and an Arcana turned out to be the perfect incentive for players to come back to Dota 2 and help the game break over 900,000 concurrent players for the first time since 2019.

Stratz.com, an analytics website for Dota 2, took a deeper look into how the Swag Bag impacted Dota 2s player base, The results showcase $35-40 worth of gifts were more than enough to revive the North American Dota 2 region from its ashes.

Compared to the other regions in the game, North America saw the biggest spike in player numbers as the number of match queues increased by a whopping 56 percent.

NA was closely followed by South East Asia, which had a 41 percent growth, while South America, Europe, and China tailed the two with an average of 31 percent increase in queues. 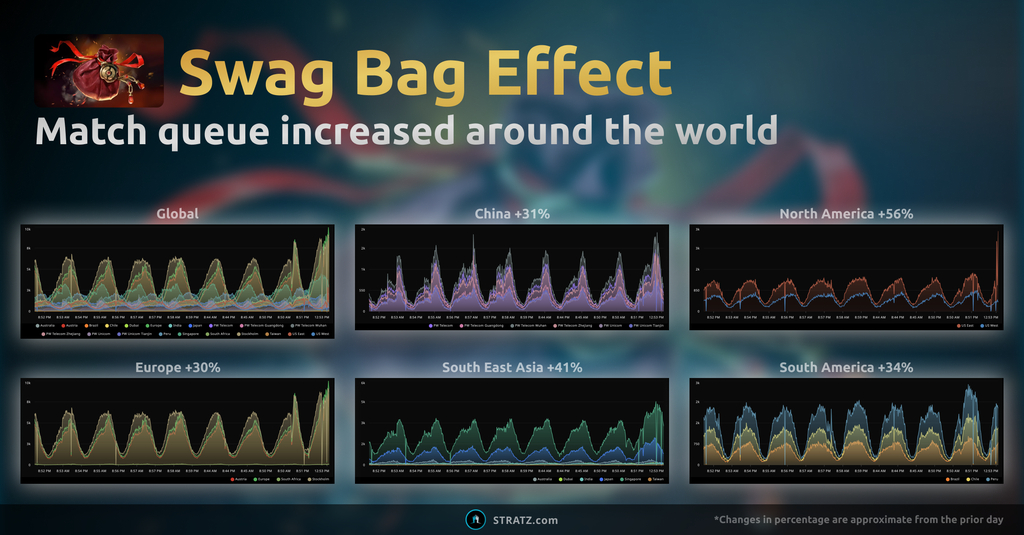 Not only does the Swag Bag feature valuable gifts, but it also contains a purpose for the returning players. The 2022 battle pass is bundled with challenges and mini-games to complete, meaning returning players will have lots to do in Dota 2, all thanks to the battle pass.

Given Evil Geniuses sudden exit at TI11 this year, NA is going to need a constant stream of up-and-coming talents to keep up with their close rivals in South America.

If the Swag Back manages to lure the future savior of NA Dota into the game, then the fans will know who to thank for the regions second TI winand dont forget to get your loot!