Nilah is now live in League of Legends

The wait is over for League of Legends players and the game’s newest champion is ready to make a big splash on Summoner’s Rift.

Nilah, League‘s newest melee-based bottom lane carry, is now on the live servers for players to try out in their solo queue matches. The water-wielding powerhouse jumps from battle to battle, using her superior mobility and invulnerability to dance around her enemies as she whips them into shape with her unique weapon of choice. 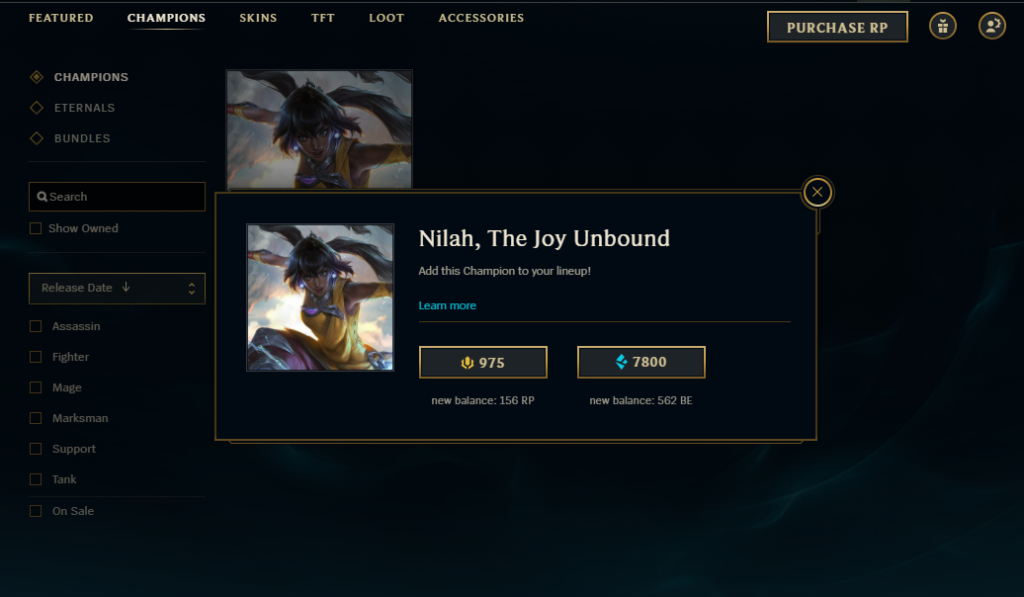 In the lore, Nilah is a warrior from a far-away land that has gained her powers from the long-imprisoned demon of joy. After winning this battle, however, all of Nilah’s emotions were replaced with unending happiness, which she now harnesses to take down the deadliest opponents from around the world.

In-game, however, Nilah can flow through teamfights with ease, whether she’s zipping from enemies with her Slipstream dash, dodging basic attacks with her Jubilant Veil ability, or setting up her allies by diving in and unleashing a whole torrent of crowd control with her ultimate ability, Apotheosis.

In the early game, she has an inherent advantage against her lane opponents since she and a nearby ally gain an additional 50 percent of the experience they would have lost from sharing. As a result, she’ll continuously out-level opponents if she can consistently last hit her minion wave. She also has a surprising amount of utility for her teammates since she can pair well with enchanters who send out a ton of healing and shielding.

Nilah is also a part of the globally-popular Star Guardian skin line, which should help convince some players to buy her debut skin. The 2022 Summer Star Guardian event is set to begin tomorrow, July 14.