The team has apologized for the “miscommunication” about the matter.

The New York Excelsior acquired a new support in An ANSOONJAE Soon-Jae earlier today and announced the drop of its previous support, Seo Myunb0ng Sang-min, soon after. For all intents and purposes, it was a routine set of announcements for an Overwatch League team.

But Myunb0ng found out about this change the same way the rest of the world did: through a Twitter post.

The Excelsior has deleted the initial tweet about Myunb0ngs release, which can be seen in a screengrab below, that thanks him for his “dedication and hard work” with the team. 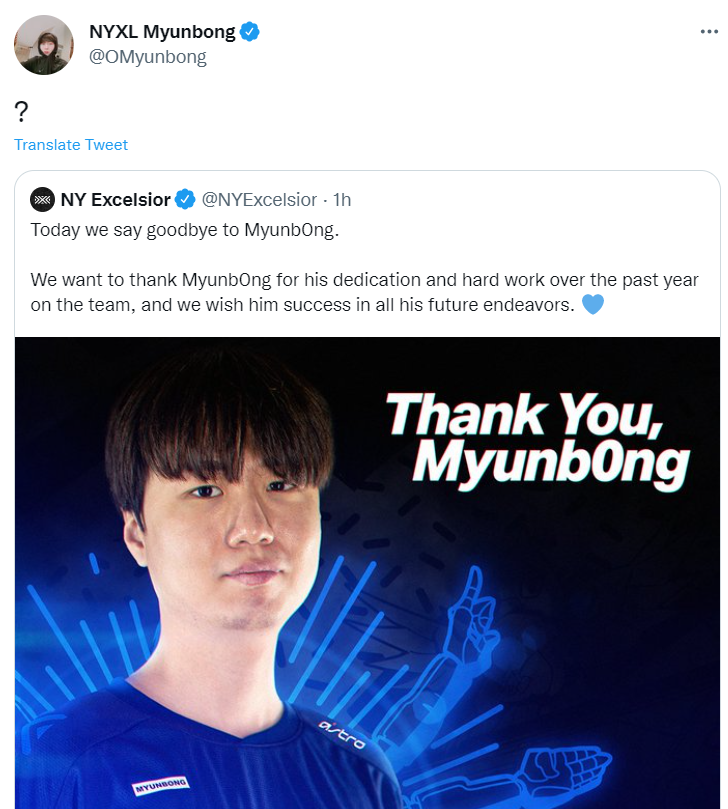 Many Overwatch League fans noticed this behavior and chimed in, hoping it was some kind of joke or a set-up by the team for another announcement.

Several hours of silence followed before the Excelsior account deleted the initial tweet. Dot Esports reached out to the New York Excelsior for comment regarding Myunb0ng’s release in the interim. At time of writing, the team did not offer an official comment or explanation.

Over three hours after the initial tweet, the New York Excelsior released a statement confirming that Myunb0ng was indeed informed of his drop through a Twitter post.

“We failed to properly communicate with the team before this announcement was made,” the team said. “We take full responsibility and there are no excuses.” The statement explains the “situation” as a “miscommunication” between staff and the team.

Myunb0ng had been with the team for the entirety of the 2022 season and was a consistent starter during this season’s two tournament cycles. The Excelsior are heading into the Summer Showdown cycle with a 1-11 overall record.

Latest comments
No comments yet
Why not be the first to comment?
Featured news
Overwatch5 hours ago

Emongg has one big criticism of Overwatch 2’s competitive mode

Overwatch 2 servers will be down for several hours tonight