Netgear dropped the world’s fastest mobile router with 5G and Wi-Fi 6E connectivity. The new Nighthawk M6 Pro is the first tri-band mobile router, and it’s being released alongside the lower-spec Nighthawk M6 in conjunction with AT&T.

Both routers have a discrete square shape that easily fits in laptop cases and even some pockets. They include wired and wireless connectivity and come with removable batteries and touchscreens for easy setup and to check signal strength at a glance.

Netgear is going all-out to accommodate remote workers, with the number set to explode in the next couple of years. According to its press release, “10.9 million Americans described themselves as digital nomads in 2020 an almost 50% increase from the previous year– with another 19 million planning to become one in the next two to three years.

The company went on to say; “Answering this critical demand, weve once again partnered with AT&T to provide two-tiered products in the M6 series, both of which are ideal for mobile or fixed wireless access in the home or office setting, even providing 4G LTE support when 5G is not available.”

The Nighthawk M6 has a top speed of 4.4 Gbps and is compatible with Wi-Fi 6 speeds of 2.9 Gbps on the 5GHz band and up to 700 Mbps on the 2.4GHz band. Ports include a 1Gbps Ethernet for wired connections and USB-C for charging. The 2.4-inch touchscreen makes it easy to configure, and the 5,040mAh removable battery can be swapped out when it’s low, and spares are available on the Netgear site. 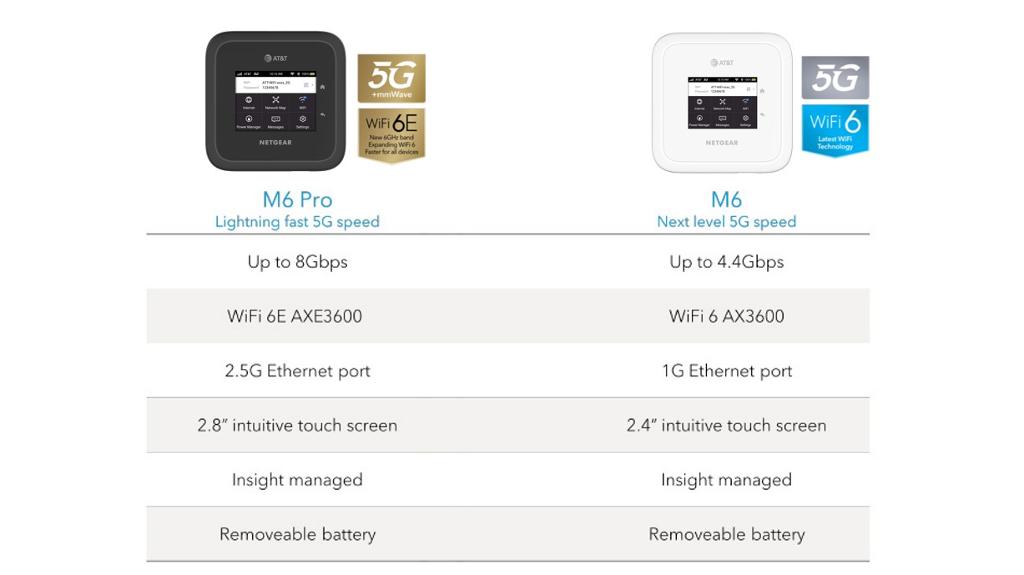 While the M6 Pro resembles the regular M6, it has better all-around performance. Its Wi-Fi 6E capability adds the faster 6Ghz band to the 2.4 and 5.0 GHz alternatives, but the router can only use two of the three simultaneously. The touchscreen is also slightly bigger at 2.8 inches, and it has a faster 2.5 Gbps Ethernet port.

Latest comments
No comments yet
Why not be the first to comment?
Featured news
Hardware5 days ago