Nerf this: Chamber was the most picked agent at VALORANT Champions

Chamber had an overall pick rate of 66 percent at the tournament.

Chamber had the highest selection rate at VALORANT Champions Istanbul despite the multiple nerfs to his overall kit.

Before Champions, Riot Games hit Chamber with yet another nerf, this time to his Rendezvous, Headhunter, and Trademark to reduce his effectiveness. This had some impact on his selection rate during regional events such as the North American Last Chance Qualifier which saw a slight reduction in him being picked by teams. Before the patch, Chamber had a 79.61 percent pick rate across all events, on all maps from all regions. That dipped to a 74.93 percent global pick rate after patch 5.03 was released on Aug. 8 and has stayed consistently at a 74 percent pick rate since then.

Even with the nerfs to Chamber, teams at Champions continued to favor him for almost all maps and used him as the primary Operator agent. Chamber had a 67.35 percent pick rate throughout the Champions group stage in front of Fade who came in second with a 54.08 percent pick rate, according to Run It Back. After multiple teams were eliminated before the playoff stage, Chambers pick rate was reduced slightly and more agents were introduced to team comps. Between the group stage and playoffs, Chamber had an overall pick rate of 66.86 percent. 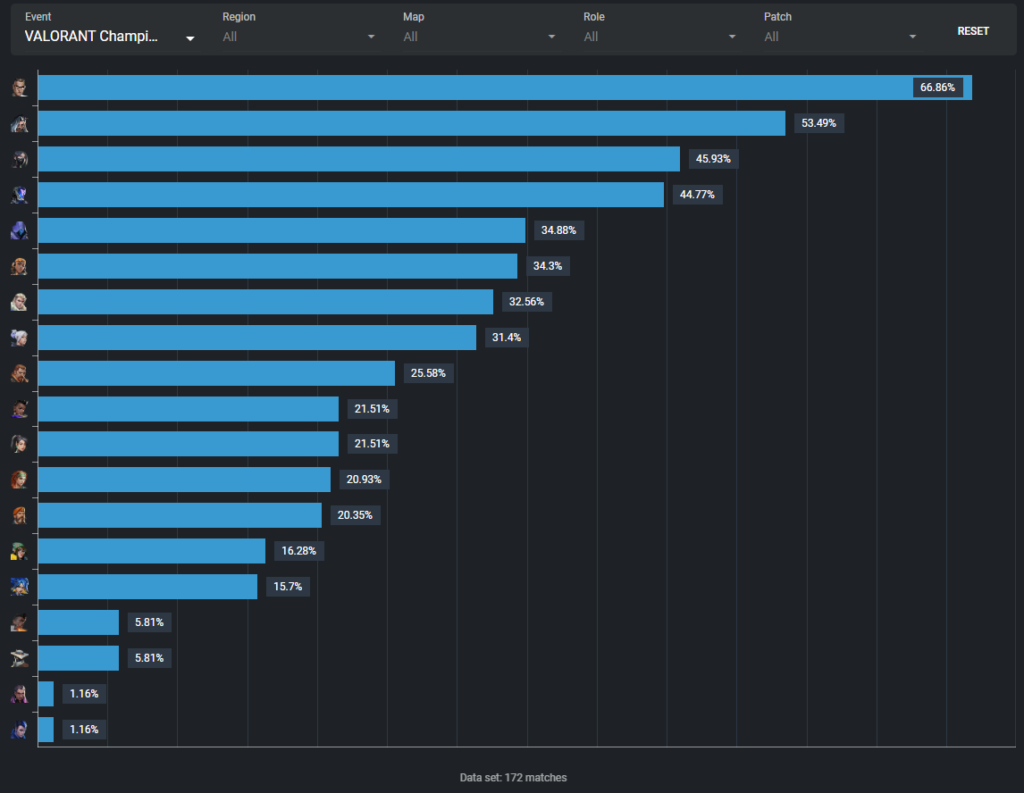 Other sentinels like Killjoy, Sage, and Cypher had a less than 21 percent selection rate at Champions, making Chamber the most preferred sentinel and agent for all team compositions. He also had a 100 percent selection rate on Fracture throughout the entire event, meaning at least one or both of the teams playing selected him. If Riot Games wants to cut down on Chambers favorability in VALORANT, they will have to go back to the drawing board for further nerfs to his abilities.

Latest comments
No comments yet
Why not be the first to comment?
Featured news
Valorant21 hours ago