May the Mortdog be with NA's only hope.

Day two of the Teamfight Tactics Dragonlands World Championship showcased 32 players from around the globe, with only eight advancing to the finals.

Five countries will get represented on the final day of the TFT World Championship as the top eight advanced after a total of 10 games played over the course of two days. China’s former world champion Huanmie dominated the leaderboard during both days of competition, seeking his second Worlds title. Joining Huanmie for the finals are teammates Xunge and HereWeGo.

Carrying the hope of North America was Rainplosion, who was sick two weeks leading up to the TFT World Championship and is still under the weather. Easily the NA rookie of the Dragonlands set, Rainplosion was barely in the top 20 following the first day of competition. She turned up the heat on day two with three first-place finishes, ending the day tied with DongGeul who is carrying hope for Korean fans.

Here were the top eight players advancing to the TFT Dragonlands Worlds finals: 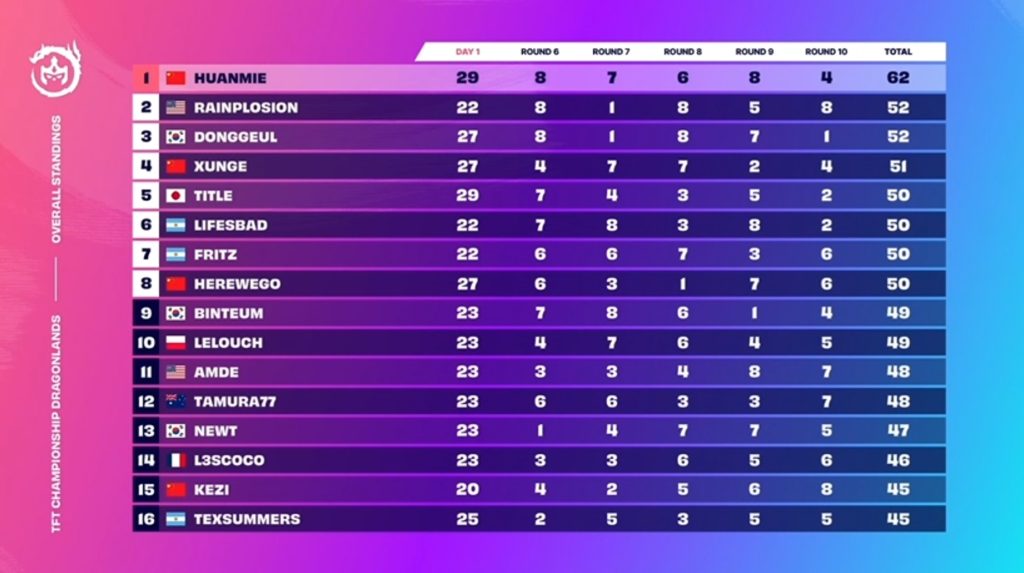 Unlike the meta at the NA Regional Finals, Dragon comps were not winning lobbies at the Dragonlands TFT World Championship every round. Able to read the meta and econ properly while positioning against power comps, Rainplosion carried Xayah with Shimmerscale, Guild, and Ragewing to earn her three lobby wins. And a Golden Egg was a solid finishing touch during game 10, providing two Tactician Crowns.

Representing the LATAM region at the TFT Worlds finals are LifesBad and Fritz. And Japan’s Title also advanced after remaining at the top of the leaderboard for two days straight. No players from the EMEA, Brazil, or OCE regions were able to make the top eight cut on day two. LeLouch from France almost made the cut, missing it by one point for tie-breakers while Tamura77 from OCE missed the cut by two points.

Also just missing the top eight cut was AMDE, another up-and-coming NA star who had qualified for Worlds by winning the TFT Mid-Set Finale. Game 10 came down to AMDE and Kyivix, both from NA, fighting for a lobby win. And despite a strong day one performance, C9k3soju failed to make the top 16 during day two.

The final day at the TFT Dragonlands World Championship will feature a Checkmate format. Players will seek to hit 18 total points for the day. Players who hit or cross the threshold, and then earn a lobby win, will get crowned the Words title and take home $100,000.