Modified decks get some more support.

Spoiler season for Magic: The Gathering‘s next set, The Brothers’ War, is rolling into its second week with more old-school Dominaria-flavored cards ready to enter the fray. The upcoming set is centered around the classic confrontation between Urza and Mishra, and provides a glimpse at what MTG‘s home plane was like during this pivotal time in history.

A major part of Dominaria is the presence of Dragons. Some of the best Dragon cards in the game have come from Dominaria-themed sets. A Mythic Rare bomb, Draconic Destiny, was revealed today as an Enchantment card that will help Red lists deal lethal damage and fly over blockers.

The Brothers’ War releases digitally in Magic Online and Magic Arena on Nov. 15 followed by a global tabletop release on Nov. 18. 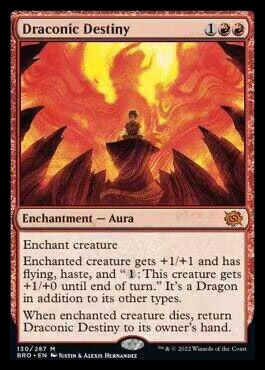 Red decks in Standard have a few different flavors. The traditional low-cost aggro decks exist, but there are also strategies that lean on the Modified mechanic from Kamigawa: Neon Dynasty. This deck uses +1/+1 counters and Enchantment cards to buff creatures and gain different benefits.

Modified decks are currently at the fringes of Standard, occasionally showing up on the ladder and are looking for one or two key pieces to put them over the edge. Draconic Destiny is a solid three-mana Enchantment that gives a creature flying, haste, and firebreathing. It’s a solid way to grow a threat and could be a devastating turn-three play if there’s a one or two-mana creature that’s worth buffing.

One great part of Draconic Destiny is its mitigation of painful two-for-one scenarios. When the enchanted creature dies, Draconic Destiny returns to its owner’s hand instead of going to the graveyard.