Several The Brothers’ War spoilers have hinted at a Blue and White soldier tribal theme since the preview season began, with Zephyr Sentinel essentially confirming an archetype within the Limited format.

The first legendary tribal soldier The Brothers’ War spoiler was Harbin, Vanguard Aviator, a two-drop that’s a Rare legendary creature within the new Standard-legal set. Next came Siege Veteran in the MTG color White. Zephyr Sentinel was revealed today by Nx Gallery, a two-drop human soldier in Blue with Flash and Flying. 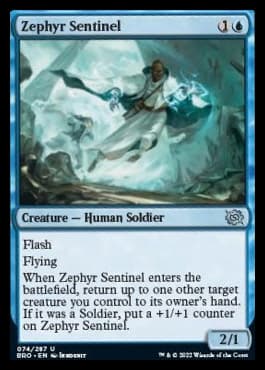 Bouncing a soldier back to hand upon casting, Zephyr Sentinel turns the two-drop into a 3/2. At the time of writing, the only soldier worth bouncing back for an “enters the battlefield” effect is Scrapwork Cohort. The Artifact creature has a rarity of Common and will likely be a solid mid-pack pick in BRO Limited Draft because of Zephyr Sentinel.

Having Flash and Flying with 3/2 stats is very powerful for a two-drop creature, especially in Limited. Flash can prevent the removal of a creature, bouncing it back to hand by casting Zephyr Sentinel. And Flying gives the soldier evasive attacks long before Harbin, Vanguard Aviator can even be played.

Players can check out the soldier tribal archetype within BRO Draft through prerelease events that start on Nov. 11. A digital release of the Standard-legal set will take place on Nov. 15.