Three is the magic number.

White decks in Standard are overloaded with great three-mana cards and Dominaria United is introducing one more to the fray.

To continue White’s embarrassment of riches, a new three-mana rare is coming in Dominaria United that contributes further to White’s control gameplans that are prevalent in Standard and Historic on Magic Arena.

While Anointed Peacekeeper will have to compete with cards like Brutal Cathar and Adeline, Respendant Cathar, the three-drop will help disrupt the opponent’s curve and tax their planeswalkers. 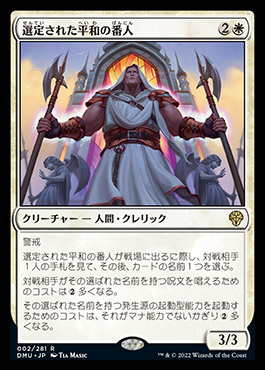 Since the three-drop slot is so packed in White, this card won’t be an auto-include. There are just too many options available that it’s possible other three-mana creatures will be more useful. But Anointed Peacekeeper is a strong option and should find a home in the many White decks looking for a replacement for Elite Spellbinder.

White is losing some of its best low-cost threats like Luminarch Aspirant. This could lead Mono-White Aggro to transition into a disruptive taxes list centered around cards like Thalia, Guardian of Thraben and Brutal Cathar.

The immediate comparison is with Elite Spellbinder but there are some key differences to note. Anointed Peacekeeper does not have evasion, but it is a more hefty body at 3/3. It won’t be an evasive finisher but it will be a better blocker on the ground.

Elite Spellbinder exiles a card, which is a useful way to get around abilities like foretell or cycling. Anointed Peacekeeper doesn’t exile, but it hits all copies of a certain card. If you name an opponent’s Welcoming Vampire, any copy they draw will cost two more to cast as long as Anoointed Peacekeeper is on the battlefield.

In the right metagame, Anointed Peacekeeper will be one of the strongest tools in White’s large toolbox.

Dominaria United releases on Magic Arena and Magic Online on Sept. 1, followed by a tabletop release on Sept. 9.

Latest comments
No comments yet
Why not be the first to comment?
Featured news
MTG11 hours ago