Grow the ranks for the war.

The Brothers’ War is expanding the scope of Standard that is at its smallest point coming out of fall rotation.

The environment after rotation is an exciting one for Magic: The Gathering players because every set provides further insight into what archetypes and strategies will be supported throughout the next year. The Brothers’ War is Magic’s next set that occurs during the pivotal conflict between Urza and Mishra.

This notable time period is a golden age for Artifacts and promises an expanded role for the card type in Standard going forward. Another card type that is getting supported is the Soldier tribe. Since the set happens during the war, Soldiers are heavily represented in The Brothers’ War, mostly in the Red and Blue colors.

Wizards of the Coast sent Dot Esports an exclusive preview card that will be a key part of any Soldier-based deck. It’s a three-drop creature that does just about everything a deck wants to do. It generates tokens, draws cards, and has relevant creature types. 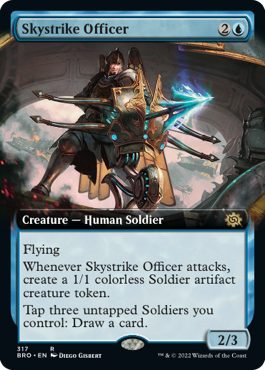 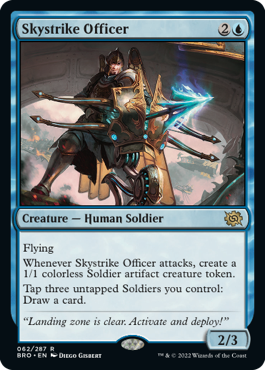 Three drops are just awesome in the current Standard format. Plenty of decks in the format can turn the corner on turn three by resolving a powerful three-mana spell. Skystrike Officer is a solid body that will be a key support piece in the U/R Soldiers archetype in both The Brothers’ War Limited and Standard.

The good qualities of the card begin with the body. A flying 2/3 creature is a solid battlefield presence that can effectively block and act as a good attacker when the game slows down. It will be a powerful option to benefit from various Soldier-related buffs because of its evasion.

Whenever it attacks, you can create a 1/1 token with two relevant types: Soldier and Artifact. In the right deck, these tokens will represent much more than just a 1/1 body. They will help trigger abilities and benefit from Soldier and Artifact-related buffs. Skystrike Officer also can be a solid source of card draw in the mid-to-late game. Simply tapping three untapped Soldiers will allow you to draw a card. When the game grinds to a halt, this ability can help carve out a lane for you to take the advantage.

You can get your hands on Skystrike Officer when The Brothers’ War is released on Nov. 15 digitally, followed by a full tabletop launch on Nov. 18.