Pump up the team.

Wizards of the Coast has added another Magic: The Gathering human soldier card to The Brothers’ War, increasing the likelihood of a soldier tribal deck within the Standard format.

Soldier tribal is quickly becoming a reality within the Standard format through the upcoming Brothers’ War set, slated to digitally release on Nov. 15. Harbin, Vanguard Aviator was first revealed as a Rare legend that pumped soldier attackers and gave them Flying. Common and Uncommon rarity cards were revealed as well, mostly for the BRO Limited format. And then Siege Veteran dropped today, revealed by MTGNerdGirl, featuring a Rare human soldier with abilities that are similar to Luminarch Aspirant. 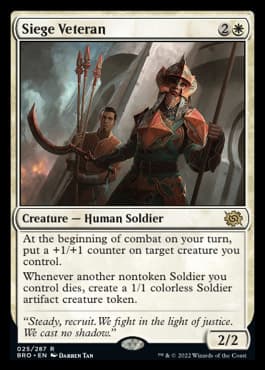 Creating a token soldier upon another soldier dying allows players to take advantage of Harbin, Vanguard Aviator’s ability even when creatures are picked off or potentially when a board wipe takes them all out. And the tokens having an Artifact creature type opens up possibilities for other synergies to take place as well.

Players can test out soldier tribal decks in Standard and Siege Veteran with the digital release of The Brothers’ War on Nov. 15. Prerelease events start on Nov. 11 and the global release is scheduled to take place on Nov. 18.