Senior Magic: The Gathering designer Gavin Verhey has added a Green Commander card in The Brothers’ War called Rootpath Purifier, allowing players to tutor just about any land from their library.

There are two preconstructed Commander decks in The Brothers’ War, slated to release on Nov. 18. This left eight spots for Commander cards within the BRO set and collector booster packs. Rootpath Purifier is one of those cards, as revealed today by Verhey on Good Morning Magic, turning all lands you control and lands in your library into basic lands. 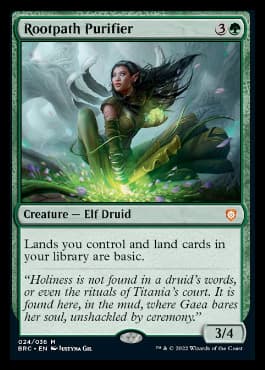 Wizards of the Coast has typically avoided tutors in preconstructed Commander decks, according to Verhey, since basic land tutors are easier for new players to understand. Rootpath Purifier isn’t in a Precon, nor is it legal in any format except eternal ones like Commander, Legacy, and Vintage.

The idea for Rootpath Purifier came about first during the design of Zendikar Rising, according to Verhey. By turning all lands you control and in your library into basic lands, players can now tutor almost any land card with Commander cards like Rampant Growth or Explosive Vegetation. The effect on Rootpath Purifier won’t work if the tutoring card specifically says a Forest or Mountain basic land, for example.

Players can test out Rootpath Purifier in their Commander builds with the global release of The Brothers’ War on Nov. 18.