Release the confines of the graveyard.

Graveyard shenanigans in Magic: The Gathering have a new Artifact tool through Conduit of Worlds in Phyrexia: All Will Be One, allowing players to cast lands and nonland permanents from the graveyard.

Self-mill strategies will return to the MTG Standard meta with the release of Phyrexia: All Will Be One (ONE) set on Feb. 7. The first major reanimation card that was spoiled was the planeswalker Tyvar, Jubilant Brawler, which is able to self-mill and return creature cards from the graveyard that have a mana cost of two or less. Players can also return lands and other nonland permanents from the graveyard through Conduit of Worlds, an Artifact revealed today during the WeeklyMTG stream. 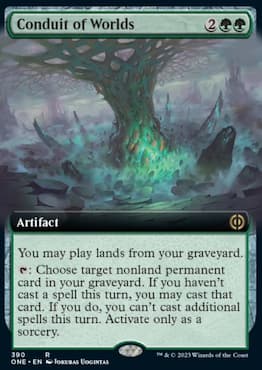 The Standard format is still packed with various Artifact synergies, making Conduit of Worlds a nice addition to the ONE set. Players don’t have to rely on the Artifact every turn, and they can even use it for sacrificial fodder when necessary.

Self-mill decks falter often when cards are pitched into the graveyard that you happen to need at that moment. Conduit of Worlds is essentially a fail-safe for this type of issue when it comes to reanimation decks, allowing players to fully capitalize on what is in their graveyard each turn.

Related: MTG Phyrexia: All Will Be One shakes up poison counters, proliferate

Players can test out Conduit of Worlds through prerelease events that start on Feb. 3 or through the digital launch of ONE on Feb. 7.