Spell-heavy MTG builds are getting a huge buff.

Wizards of the Coast has designed a Magic: The Gathering Blue Artifact called Ichormoon Gauntlet in Phyrexia: All Will Be One that synergizes with planeswalkers.

One of the main mechanics in Phyrexia: All Will Be One is the return of Proliferate, synergizing with Toxic and Oil counters, along with other counters like +1/+1 and Charge. The set also includes a total of 10 planeswalkers, the most seen in one MTG set since War of the Spark. Revealed today by WotC, the Magic design team is using those planeswalkers and Ichormoon Gauntlet as Proliferate engines in ONE. 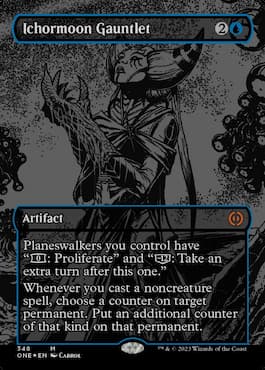 Artifact removal in Standard is about to become even more popular with the release of ONE. Ichormoon Gauntlet is a bomb not only in Limited but potentially Standard, Commander, Pioneer, and other MTG formats.

Giving all planeswalkers the option to Proliferate at no loyalty cost increases the overall power level of planeswalkers, especially ones that use a minus-X for removal. The minus-12, take an extra turn is cute, but even with Proliferate on planeswalkers, it’s unlikely players will achieve this ultimate often.

Ichormoon Gauntlet stands out as a potential bomb because of the Artifact’s second ability in conjunction with giving planeswalkers Proliferate. Slotting into spell-heavy Izzet builds, the Blue Artifact can also provide an alternative form of Proliferate each time a noncreature spell is cast. Targets can include planeswalkers loyalty counters, along with Oil, Toxic, +1/+1, and other types of counters.

Players can test out Ichormoon Gauntlet through the digital launch of Phyrexia: All Will Be One, which is scheduled to take place on Feb. 7. A global release is scheduled for Feb. 10.